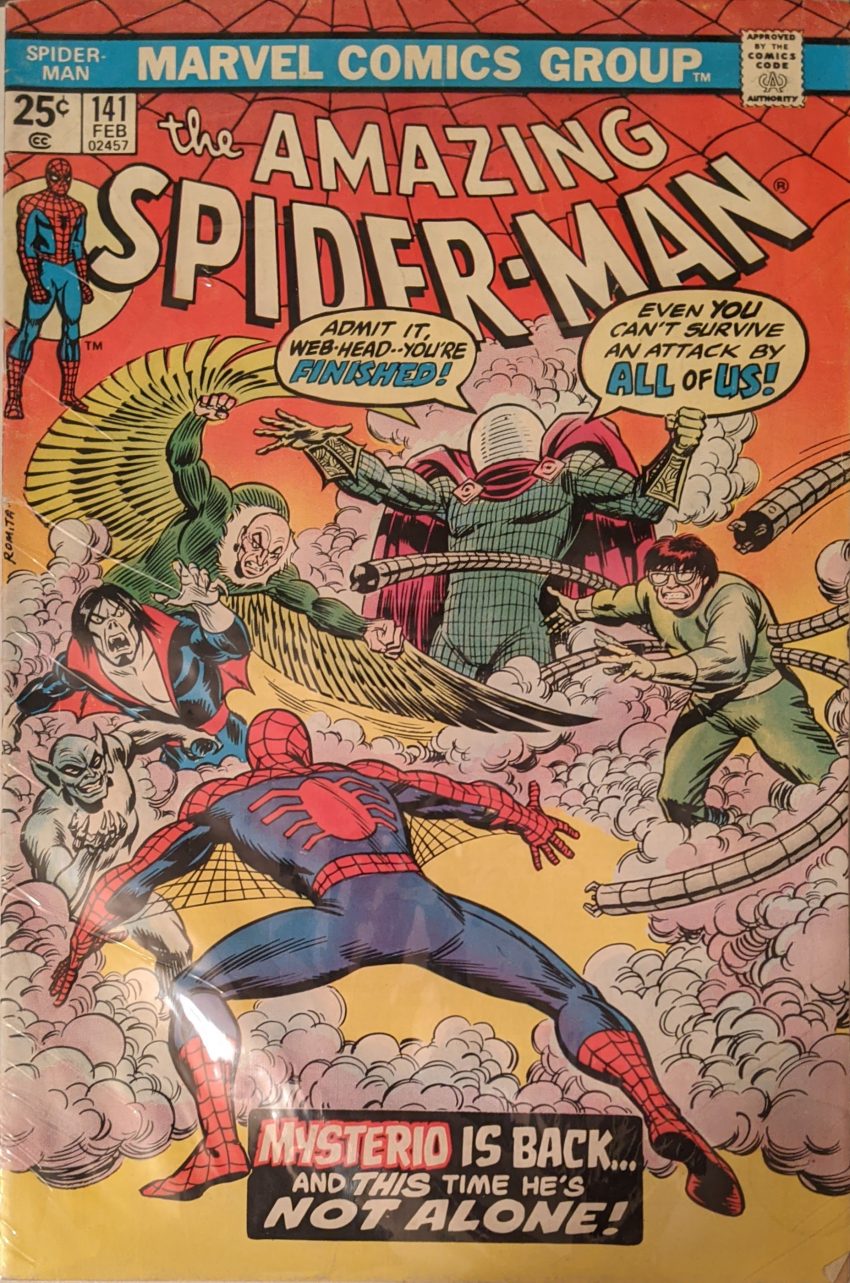 Could it be that everyone but Mysterio here is… an ILLUSION? Could it be that, despite our desire to trust, things are not what they seem? Let’s see if that’s what happens here, in a new one brought to us by the usual ASM gang. Of all the ways to open an issue of ASM, this is a pretty unusual one.

In the kind of thrilling high speed car chase no one expects from a Spider-Man comic, Spidey manages to elude the police and duck down an alley, except it’s not an alley at all, it’s a pier, and he drives the Spider-Mobile right into the river.

Spidey hauls himself out of the drink, confused and irritated, and finds his webshooters aren’t working after getting dunked, so he has to walk home. How’s that for the ol’ Parker luck? Apparently the order came down to give Spider-Man a car so they could sell a toy, and this was Conway feeling like he was done with that. There’s a kind of sweetness to the idea that it has to be in the comic before they can make a toy, tho, having grownup in the era of, like, Arctic Assault Rocket Launcher Batman and toys of that nature. The next day, he’s falling asleep in the class of Professor Miles Warren, who hasn’t been seen or mentioned in a bit, but is still Peter’s teacher. Pete’s caught sleeping and Warren has a word with him after class, reminding him he already failed this class once. He tells him he’d like to think he & Peter have a good relationship, “as teacher and pupil — Even as friends.” Uh.. ok. Peter says thanks and leaves.

Conway sure is obsessed with “male chauvanism.” MJ’s coming on strong as usual, and also as usual, Peter is just thinking about Gwen. I mean, I get it. It’s probably only been a month or two, Marvel-time. But it begins to feel a little maudlin 20 issues later, almost 2 years, our time. Kind of a tightrope to walk with this sort of comic. Also, what is MJ’s major? What is she studying? Snark? I don’t think we ever find out. Meanwhile, at a private club, J. Jonah Jameson gets a phone call:

Probably can’t mean anything good. On the very next page, a moment that will live in infamy:

Peter Benjamin Parker! What are you doing!? JJJ was right all along! Also there was a drink in that bag too?? The fog that made him drive off the pier is back, making him dizzy, and he falls off the roof. Gee, whose gimmick involves a lot of fog, Spidey? Maybe a guy you know with a fishbowl on his head? Spidey grabs onto a fire escape and saves himself, wrenching his shoulder in the process. And then he finally figures out Mysterio is bothering him. Not that that helps him, like, do anything:

Sure, dude, why don’tcha just stand there and take the most awkward punch I’ve ever seen? This is ol’ bowlhead’s first appearance since ASM 67 according to a footnote. That’s a long time, Gerry Conway’s really bringing them back. Woulda been fine to leave this one in the past myself, though. Mysterio is faster and stronger than Spidey remembers, like every villain he fights, and clearly trying to lead him somewhere. Spidey obliges, and then almost gets hit by a truck driving on the wall, just like he is. He dodges away, badly injuring his elbow in a fall, and then realizes it was an illusion. What gave it away, Parker? Was it the truck driving on a wall? Then…

Dab on ’em! I hate Mysterio stories so bad. Spider-Man looks like an absolute idiot here. Even after he realizes they’re illusions (Which somehow doesn’t happen as they appear through a wall??) he keeps trying to fight them…

Spoooooky. Having already covered Mysterio’s next appearance, we kind of know what happened. But that explanation barely made sense to me, maybe this’ll help. Probably not. I am not into Mysterio, man, I can’t help it. My Marvel Value Stamp has been pilfered! Whoever vandalized this book back in the 70s did so with remarkable efficiency. They just cut out a square, didn’t even slice the page in half. But yeah, that’s no fun. Also, this one has some kinda gunk on the back that I’m trying really hard not to believe is the remnants of a desiccated insect, but I’m not winning that fight. Comic collecting is a hard business.