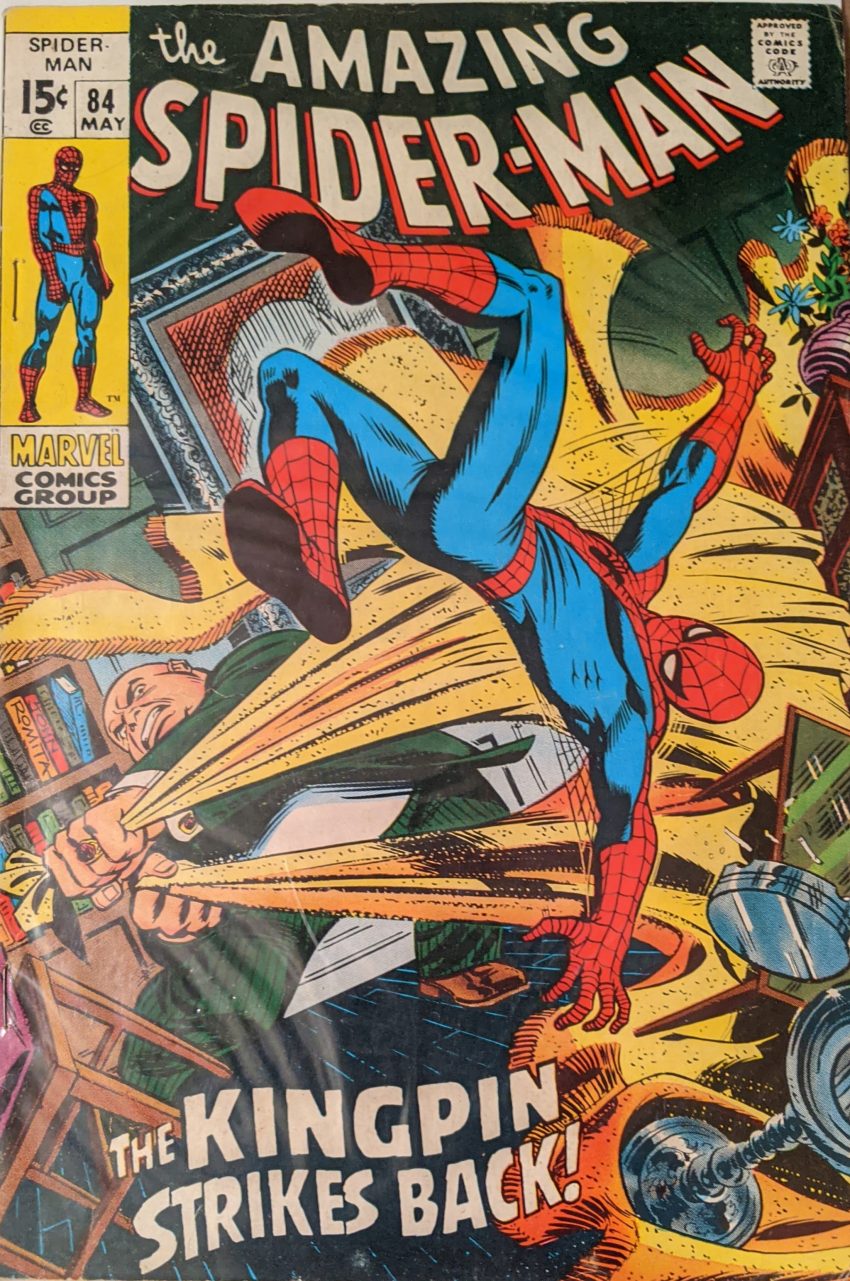 Literally pulling the rug out from under him! This month, we’re back to Romita doing layouts, Buscema penciling and Mooney inking. So much upheaval. On a snowy night, Spider-Man is reading The Daily Bugle, and pleased to learn there’s now a $5,000 reward for apprehending The Schemer. After helping a bus stuck in the snow (Whose driver panics and thinks he’s trying to hijack it), Spidey decides to rough up some goons for info on The Schemer.

“Boner” has really turned into a different word over the years. And this seems a serious stretch of the Spidey Sense. How is that guy danger? At any rate, some superheroic threatening reveals The Schemer moves his hideout everyday so no one can rat him out, and after subsequent hours of searching, Spidey is freezing cold and no closer to finding his new foe. Switching to Peter with no idea what time it is, he decides to see if Gwen is still mad at him. George mentions it’s awfully late when Peter arrives at the door, but everyone’s still up. Gwen says she’s been up thinking about them.

As attempts to not seem suspicious go, freaking out and running away is not high on the list. Meanwhile, in a specially designed supercar that would make James Bond jealous ,The Schemer is deciding his next move. He eventually settles on just taking off and attacking The Kingpin right now. Well, ok. But first, he stops by a gambling spot to single-handedly beat up a bunch of Kingpin’s goons and have them deliver the message that he’s next. Kingpin is privately raging about the apparent death of his son when he gets the news, and it makes him so furious he smashes his desk in half.

As luck would have it, Spidey happens by the place Schemer busted up earlier, and overhears that he;s after Kingpin and driving a specially modified car. And then, almost immediately, he sees that very car speeding by below. Man, what a lucky 10 minutes! Then we hit the first chronological appearance of a strange practice of this period: 2 pages that are half story, half ads. Why not just do a page of story and a page of ads instead of seriously wrecking the flow of the book? But this would happen for awhile after this. Anyway, Spidey catches up to the car and lands on the roof. Schemer hits the gas to throw him off, but then decides this is a chance to kill him and turns around to come back for more.

Not only does his car do just fine in water, it flies up out of said water  before hitting the ground and lighting out for Kingpin’s again. A soaked Spidey follows through the snow. That won’t be good for him. But Schemy has a headstart, and some kinda gadget that disables Kingpin’s security, so…

Always forgetting how fast people are, Spider-Man. Come on. Kingpin turns all his rage on Spider-Man, completely ignoring The Schemer for a page of fightin’. Kingpin rips up the carpet like on the cover, but it’s the carpet of an entire large room of his mansion, moving like a wave. He’s able to wrap Spidey up in it, and prepares to beat him to death, but Spidye just punches loose and escapes. But, he’s more interested in the reward for The Schemer, so he evades to go see what’s happened to him. He and Kingpin find Schemer & Vanessa are gone.

Trouble trouble trouble. Is this really a return to the old school Spider-Man? I mean, I guess in some ways. But it’s not quite the same.