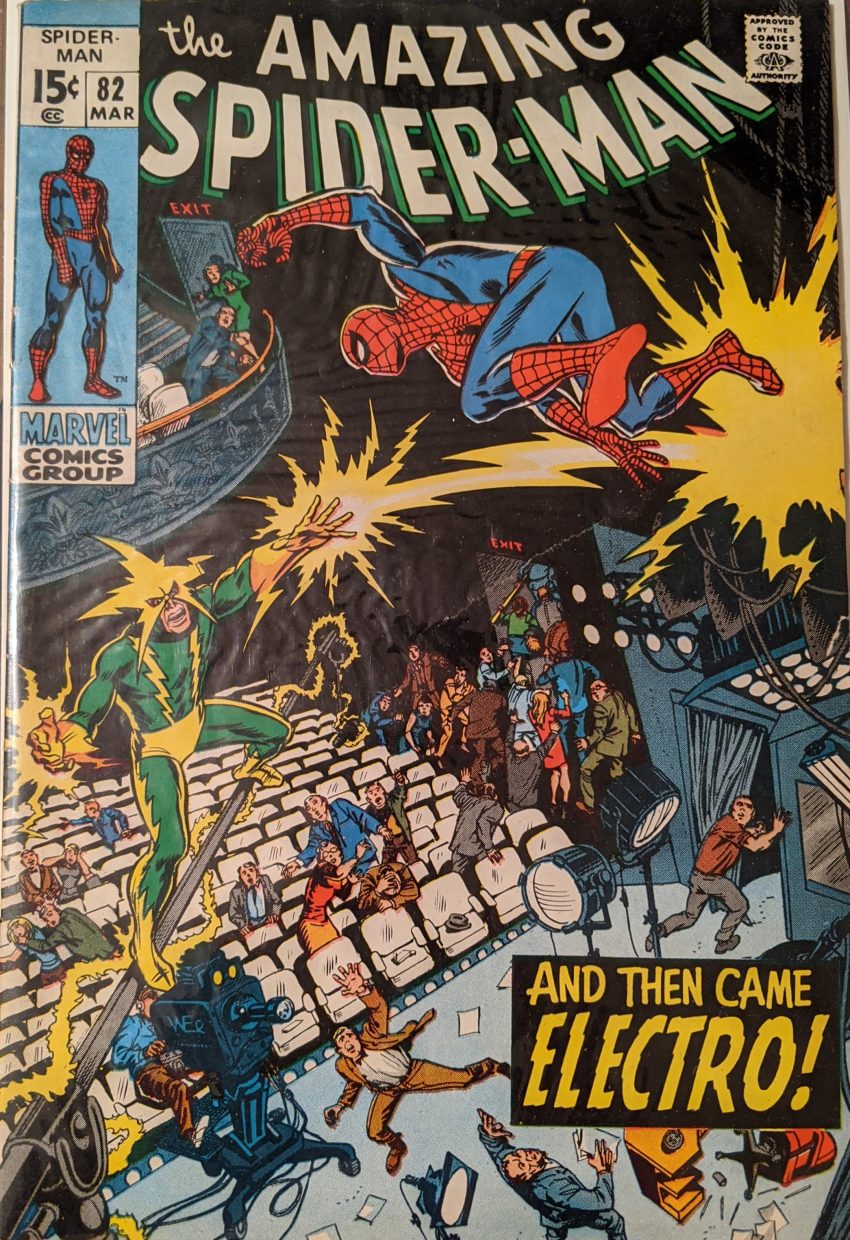 This month, Romita is back to pencilling the book! Exciting. Mooney is still doing inks. The Bullpen Bulletins section announces this, and also that “Stan & Johnny have decided to go back to the Web-Swinger’s original style of story picturization, and also put more emphasis on Peter Parker’s private life, as so many of you have requested.” Well, then. How’s that gonna work?

Oh, so we’re in it immediately!

MJ’s hair is back to normal! And Harry’s mustache has to follow pretty soon since it was already gone by 86. We are getting back on the right track around here. Peter has spent many of the last several issues coming home late at night to find Harry out, presumably with MJ, but she was in Florida. Harry’s just a swingin’ guy, I guess. Peter switches to Spider-Man to try to scare up some newsworthy photos, but half an hour later he’s got nothing to show for it, and then swinging over a chimney puts him in the middle of sudden puff of smoke, covering him in soot. Dejected, he decides to go home, but he finds Harry there, shaving that stupid mustache, so he feels he can’t sneak in. He tosses his regular clothes in the window of his bedroom and heads back out. Suddenly, he hits on the idea of trying to get on TV for money, and swings in the window of a local TV station.

Electro getting a normal job is pretty unexpected. Electro’s been bugging a few other heroes from time to time, but he hasn’t shown up in the pages of ASM since Annual 1. Two long overdue comebacks in a row. As such, the gang recap his deal as he heads home to find his parole officer waiting on his stoop. He says he heard about Max’s act of heroism and to keep it up, but internally, Dillion can’t wait to get back to sueprvillainy.

Why does JJJ have a TV editorial? As Electro plots, Peter Parker goes to pick up Gwen Stacy, but he can’t even afford taxi fare, he’s so low, so they take the subway to meet up with Flash, Harry & MJ.

Electro offers to beat and unmask Spider-Man on TV if Jameson will pay him. JJJ offers $1000, and Electro counters with 5, which JJJ accepts. Jonah is gleeful as the criminal he just made a deal with goes off to attack a TV show, and meanwhile, Gwen rushes out after Peter to talk to him.

Seems like Peter’s gotten so used to hiding his identity that he’s started to hide all his problems. Also seems like them finding a way to quickly whip up some of the personal drama they wanted. JJJ tells Robbie he got them tickets to the show Spider-Man will be on, and tells him to invite George Stacy, too. Robbie can obviously tell something is up, but I don’t think he’d ever suspect JJJ would hire a supergoon. He’ll learn, tho… Meanwhile, Peter goes home to realize his Spidey suit is still dirty and his spare is torn. He washes it in the sink, but when he tries to dry it at a laundromat, it’s full of people. Now here’s an unusual superhero problem. And guess how he solves it?

Spidey wearing a bag over his head during the alien costume story is famous, but I’ve not heard of this incident before. Pretty funny.

Spidey lunges for Electro as the staff tries to clear the building. JJJ crows at Robbie & George to stay and watch what’s going to happen. They both realize he did this, and after they tell him he’s crazy and didn’t think of what could happen to all these innocent people, he’s suddenly a lot less excited. Spidey manages to keep the fight with Electro away from the fleeing crowd. As they’re leaving, JJJ is still rooting for Electro.

Peter’s hair standing up is a good touch.  He’s sure back to being down-on-his-luck hardcore. They didn’t ease into it at all. Also on this month’s Bulletins page is an item that’s just congratulating Jerry Seigel’s daughter on getting a scholarship to UCLA. That’s really nice of Stan. But much more importantly, there’s a Stan’s Soapbox that has really fueled the controversy over who did what in the Marvel Method, where Stan says every issue begins with a conference between writer and artist, because “Marvel believes the artist contributes as much to the story as the writer does.” But, of course, oftentimes the artist drew the whole book with no input from Stan, and even then he’d still credit himself as “writer,” making everyone think he came up with all the plots, inadvertently or otherwise. No one will ever really know what happened. Messy stuff. Finally today, JM DeMatteis has another letter printed this month, and he loved Hobie Brown.