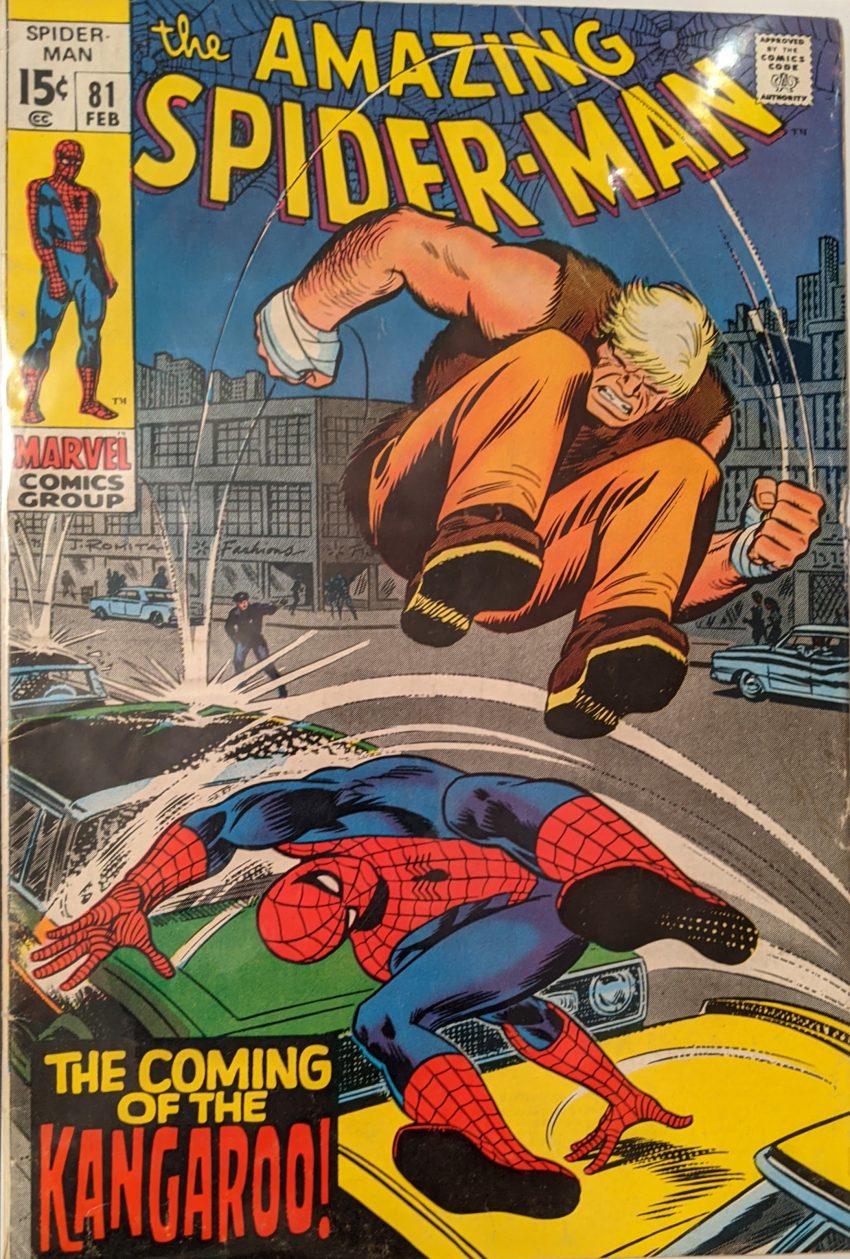 Swing and a miss! I would say The Kangaroo is the first big flop of a villain in ASM. But, I mean, it was quite a winning streak up until now, a collection of villains at or near the top of the chart (You may say Batman has better. You may even be right, I don’t know). Chameleon, Vulture, Doc Ock, Sandman, The Lizard, Electro, The Enforcers, Mysterio, Green Goblin, Kraven The Hunter, Scorpion, Spider Slayers, Crime Master, Molten Man, The Looter, Robot Master, Rhino, Shocker, Kingpin, Man Mountain Marko, Prowler… Kangaroo. Looter and Robot Master were pretty weak, but they at least had costumes that didn’t look like… this. The Enforcers were silly, but at least memorable (And part of essential Green Goblin stories). Man Mountain Marko was just buff Elvis and even he was cooler than this. Spelling it out like that also makes it obvious how the villain machine has broken down. Only 6 new villains in the last 40 issues. One of them was Kingpin, so maybe it’s quality over quantity, but still. No one gets a specific credit this month, but Lee, Buscema, Mooney & Romita are credited in that order, so probably the same as last month. As we get underway, Spider-Man is swinging as fast as he can to Penn Station to meet Aunt May’s train, arriving back from Florida.

What an introduction. The Kangaroo begins monologuing to himself when he’s alone, about how no country will let him live in it, which is hilarious. He tells himself how he… how he spent his vacations living with kangaroos until he learned their abilities. Really. That’s his origin. Then, when he was as strong and agile as a kangaroo, he tried to become a wrestler, and almost killed a guy 5 seconds into his career. He fled the scene and the country, sneaking into the US, but he was caught without a passport and in the process of being deported (On a subway train!) when we came in. He says if his power has made him a criminal, he won’t fight it, dons his furry vest, and prepares for villainy. What an intro. Sheesh. But whatever villainy he’s about to commit, he won’t have to worry about Spider-Man, because Aunt May is making him stay with her so she can take care of him, since she’s convinced he’s sick now. Anna Watson is staying in Florida and extra week, so she puts Peter in Anna’s room, and he doesn’t know how to talk his way out of it. He decides if it makes her happy, he can hang out there tonight. And while he does, some guards are moving some “deadly live bacteria”…

Kangaroo makes off with the case before anyone can tell him what’s in it, and he’s pretty disappointed it’s not money. He assumes the metal vial inside must have jewels in it, but those take too long to sell, so he just stuffs it in his dumn, furry vest. This guy sucks! Meanwhile, Aunt May comes home from the drugstore with an unnecessary prescription for Peter to find him watching the news, where he learns that the bacteria The Kangaroo stole could cause “a plague” if opened, and they literally beg him to return it. Peter fakes very ill so he can go back to bed.

But, eventually, Spidey finds Kangaroo trying to rob a fancy party, and instead of attacking, tries to plead with him to give up the vial. Being a Grade A dumb-dumb, tho, Kangaroo takes it as an attack, anyway.

Spidey shrugs off the punch, but he still doesn’t know what to do. Kangaroo jumps at him again, so he tries a backhand slap to slow him down, but it only stops him for a second.

Rough night for the Parkers. Back at the fight, Spidey manages to turn being kicked off the roof into a surprise return that catches Kangaroo offguard. He gets him in a leg lock upside down, dangling him off the roof in a desperate move. His plan works, and the vial falls out of Kangy’s dumb vest so Spidey can web it to safety. Kangaroo flees and Spider-Man lets him, having saved the day. Down on the street, the cops run up, and he carefully puts the vial on the ground and takes off. Some wonder if he saved the day, while others wonder if he was trying to steal it. The usual for our hero.

In recent preceding issues, a lot of letters have been published lamenting that Spidey isn’t like he was in the old days, riddled with problems, so here we are, reverting to his oldest, tiredest problem. How many times can Aunt May’s health be imperiled? This bit’s already been done to death. But it’s basically her only storyline until Roger Stern comes along to save her in the 80s. In this issue’s letters, debate continues about whether the book should focus more on Peter or Spider-Man, and whether the good old days were really better. And one fan suggests Gwen should be bitten by a spider and become Spider-Woman. Stan responds that they’ve “seen that done elsewhere and weren’t batty about it.” Har har. This months’ Bullpen Bulletins has a short item on Wally Wood returning to draw for Marvel, in which Stan mentions wishing “S. D.” would come back, too, saying “A man can dream, can’t he?” Some dreams can’t come true…