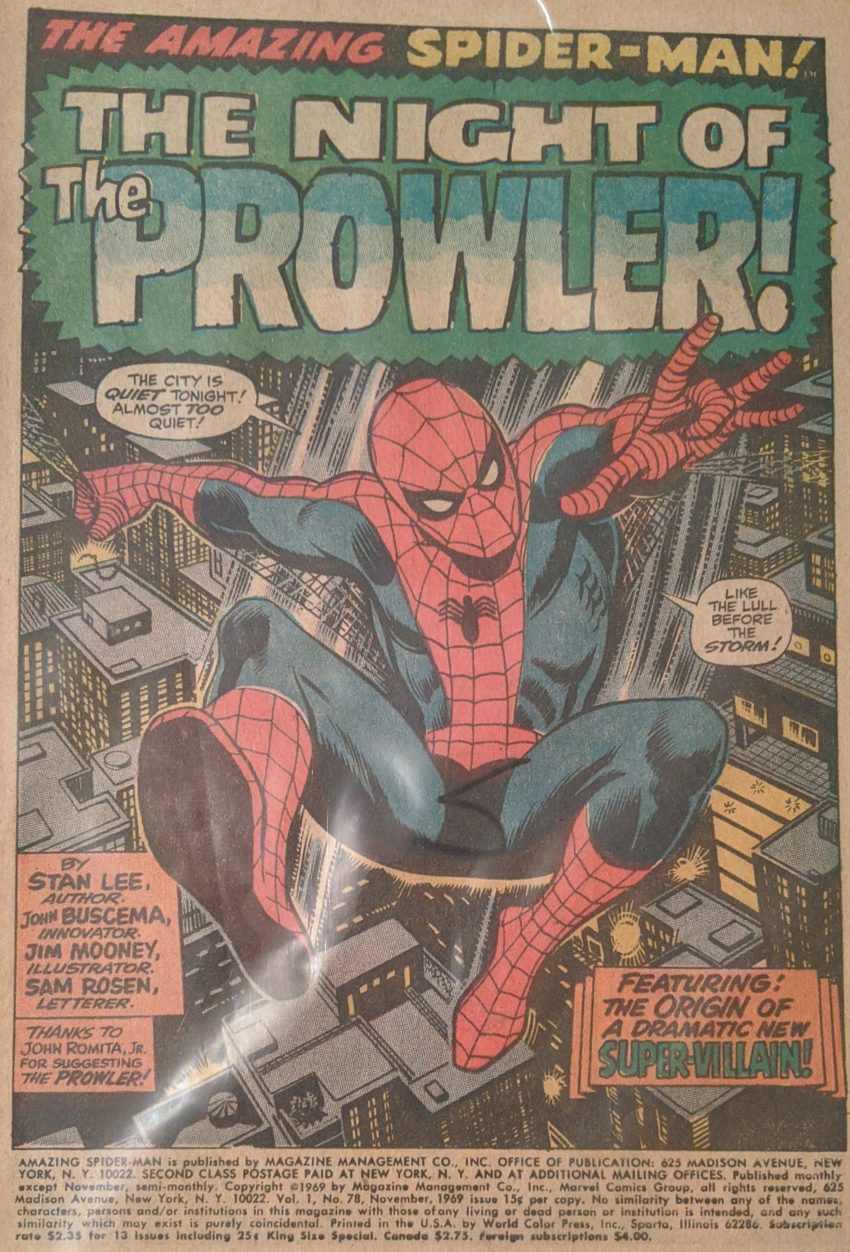 Coverless! But guess what: It was $5. The Prowler may not be the biggest Spider-Man adjacent character, but he’s still a classic, and his first appearance can be pricey. For $5, I am good with this. And look at that, John Romita, Jr.’s first credit in a comic book comes when he’s just 13! The existence of that credit and the long-floated theory that The Prowler’s look was originally going to be the villain of Spectacular Magazine #3 suggest Romita, Sr. had a role here, and yet his name is absent. Who knows? I guess I can’t continue without noting someone drew an “S” on Spidey’s crotch. The world is full of mysteries. Spidey recaps to himself that the adventure of the tablet and The Lizard is finally over, amusingly remarking that Spider-Man has seen enough action to last him for months recently, and he really needs to concentrate on Peter Parker for awhile. The subtext is text!

Stan Lee had an unquestionable talent for dialogue that was unique among his peers, and yet he also routinely wrote things like “I’m… bein’ lifted… with just one hand!” Let the art tell the story, Stan! Flash with Gwen, eh? Seems like some soap operatics comin;’ our way after a long absence. Spidey hangs up, worrying that Gwen maybe doesn’t think of him as her boyfriend anymore. But people show up wanting his autograph and acting like fans instead of hating him for once, which makes him flee just as quickly as if they did. He swings home to get some rest, but finds Harry awake talking to MJ on the phone, and can’t go inside yet. Why not go in your own room? He has to wait on the roof for 20 minutes. The ol’ Parker luck. He tries to study, but can’t stop thinking of Gwen. He resolves ot go walk by her house, maybe knock on the door and say he came to see George if she doesn’t want to see him. Bit aggressive, buddy! Give the lady her space! But…

Yer tellin’ me that John Romita, Sr. had nothing to do with this page? I can’t believe it. Stan had him doing uncredited touch ups on other titles. Part of why he couldn’t draw this one. I guess he could do it to Spidey, also.

Peter knocks the 2 guys into a wall before remembering himself and panicking, hoping they’re ok. Seeing they are, he runs off before anyone can endanger his secret. Walking past a window washer, he thinks that guy can’t have half the worries he has. But that’s Hobie Brown!

Again, if Romita’s not involved here, I’d be stunned. Not only does it look like it, but romance comics were his bread & butter for a decade before he got on the superhero train, this is his sweet spot.

JJJ is a complicated man. Totally on the side of a random down-on-his-luck guy, even seemingly ending a contract with his window washing service for him. Hobie goes home and decides to put together a costume to get some press for his gadgets. As he retrofits his pellet-shooting gauntlets for “gas and other stuff” instead of cleaning fluid and attaches them to the metal gloves he made for holding onto the sides of buildings, he ponders whether to be a hero or a villain, and decides being a villain will get him in the news a lot faster…

Always loved this look. It’s simple, but effective, and the outfit not being tights is kind of revolutionary. Great mask, cool gloves. He tests his gear for a page, and then decides The Prowler will very visibly steal some stuff so Hobie Brown can recover it and be a hero. Around the same time, Peter Parker is arriving at The Bugle, hoping to appeal to JJJ to get some money he can send to Aunt May in Florida. But Hobie has decided The Prowler will rob a newspaper, and guess which one? Since he wants publicity rather than loot, he figures hitting up a newspaper will be the quickest means to his end.

And so, one month after the notice that most Marvel stories will now wrap up in a single issue, we’re to be continued! Kinda funny. Next post’s comic has a cover, but here’s the missing cover to this one: