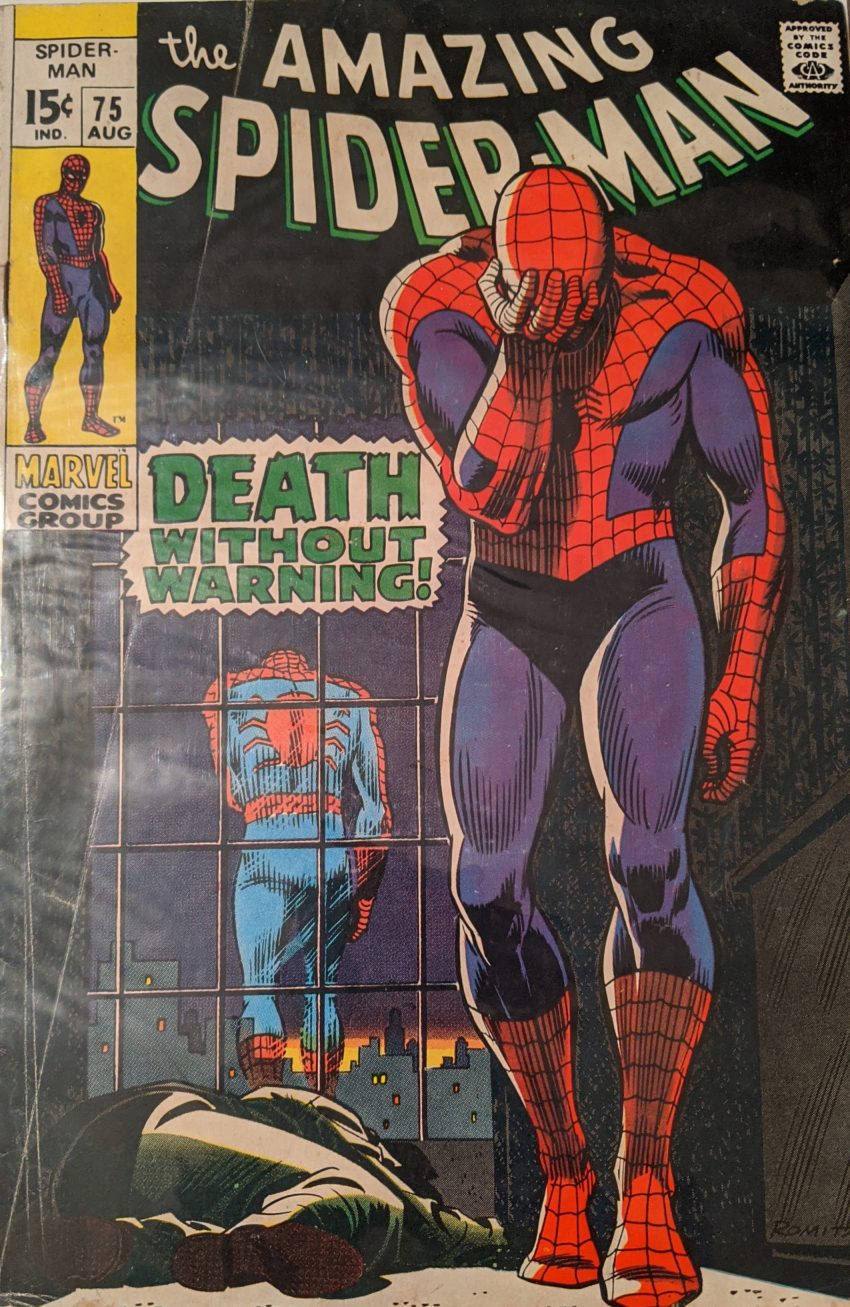 Another very famous cover from this period. But who’s gonna die? Stan’s back to “Author” this month, but the credits are otherwise unchanged. The switch from Heck & Esposito to Mooney has really softened the blow of Romita not doing full pencils. In a rare first page that isn’t a splash, Spidey combs the city looking for either Curt Connors of his family, desperate to help them. As his search is getting him nowhere, he finds a couple hoods working as bookies and dangles them out a window. A classic move, but not the most classic Spider-Man move.

The only thing about Mooney is he’s not doing the eyes right. At Spidey’s destination, Man Mountain Marko is refusing to believe the new, young Silvermane is the same guy, even though… he’s standing in the sameplace, speaking with the same voice, and was there 2 seconds ago. Doc Connors slipped away in the confusion, and Silvermane wants him found, but Marko also believes that guy can’t possibly escape. Meanwhile, Caesar Cicero leaves Martha & Billy in the care of a goon to go see what all the noise is about, and is shocked to see the now-young SIlvermane.

I grant you that a man deaging by like 40 years is really hard to accept, but maybe less so in a world of superheroes and villains, and also their explanations for how and why they’re being tricked are sillier than the truth. As Silvermane keeps slapping Marko around with greater ease that Spider-Man did, which seems ridiculous, he continues to grow younger, which makes Marko finally quit being stupid and accept the truth. Good timing, too, ‘cuz…

I have definitely seen that Spidey up top before. Spider-Man dodges the charging brute with ease, saying he took it easy on him because he was distracted before, grabbing him with one hand and throwing him across the room. But the fight is interrupted as Silvermane exclaims in shock as he continues to grow younger. In fact, he looks almost exactly like Peter Parker now, though probably not on purpose. He says no one can oppose the power of one who’s drunk from the fountain of youth and gets down to fighting Spider-Man, and outside, Curt Connors takes that as his cue to leave.

The Lizard decides to flee and find a place to make sure he never turns back into Connors. Meanwhile, Cicero is slapping around the guard who saw him, saying this “man who looked like a lizard” is just another trick of Silvermane’s. That Silvermane, full of tricks! He tells his dudes to get their guns and head for SIlverman’s office. In there, a raving mad Silvermane is making a pretty good stand against Spidey, who really just wants to get away and look for the Connorses.

As Spidey tangles with the goons, Cicero goes to kill Silvermane, only to find a young teenager in his clothes. Silvermane is finally starting to realize this is probably not going to end well and freaking out. The young Silvermane dashes out of the room as Spidey is mopping up the goons, and he can only recognize who it is by the clothes. He follows in the direction the boy ran, but…

For all that McFarlane and others tried to make The Lizard seem scarier or whatever, when drawn right, the original design is way weirder and creepier looking. I cannot wait to see how Silvermane not only survived this, but wound up 80 years old again. It’s gonna take some serious backpedaling. In the letter column, Stan runs a very long and well-thought out missive from a Steve Games who identifies 3 eras of Spider-Man and makes a case for the book getting worse with each one: 1-39 (Ditko’s last), 40-57 (When Heck & Esposito came in), and beyond. He argues that not only is the character very different from the outcast nerd and feared vigilante he started as, and that the art is worse now, but that Spider-Man and his battles have overshadowed the life of Peter Parker. And on that last point, I’d say he’s mostly correct. These longer storylines and fight-packed issues have really strayed from the path, I’d say. While the supporting cast hasn’t been totally abandoned, they don’t warrant many pages per issue (None this month!), and it doesn’t help that Romita & Lee have used what little space they get to focus on Robbie & Randy instead of everyone else in recent months. We barely know Randy, I can’t imagine people were more excited about their family drama than Gwen, Harry & MJ. Heck, I can’t say offhand when we last even saw MJ. SSM #2, I guess? This endless saga will continue for a couple more issues, but an editorial edict will soon go out that Marvel comics should be mostly single-issue stories. Back when you had to rely on newsstands to get your comics, making sure you got every issue was hard, so stories like this, running nonstop since ASM 68 and counting, could be really hard to enjoy for the average reader. And, as we’ve seen, Romita returns to full-time pencils and things tighten up considerably with issue 86, leading to a truly excellent run of issues by him & Gil Kane through the end of Stan’s tenure on the book. I wonder how Steve felt then.