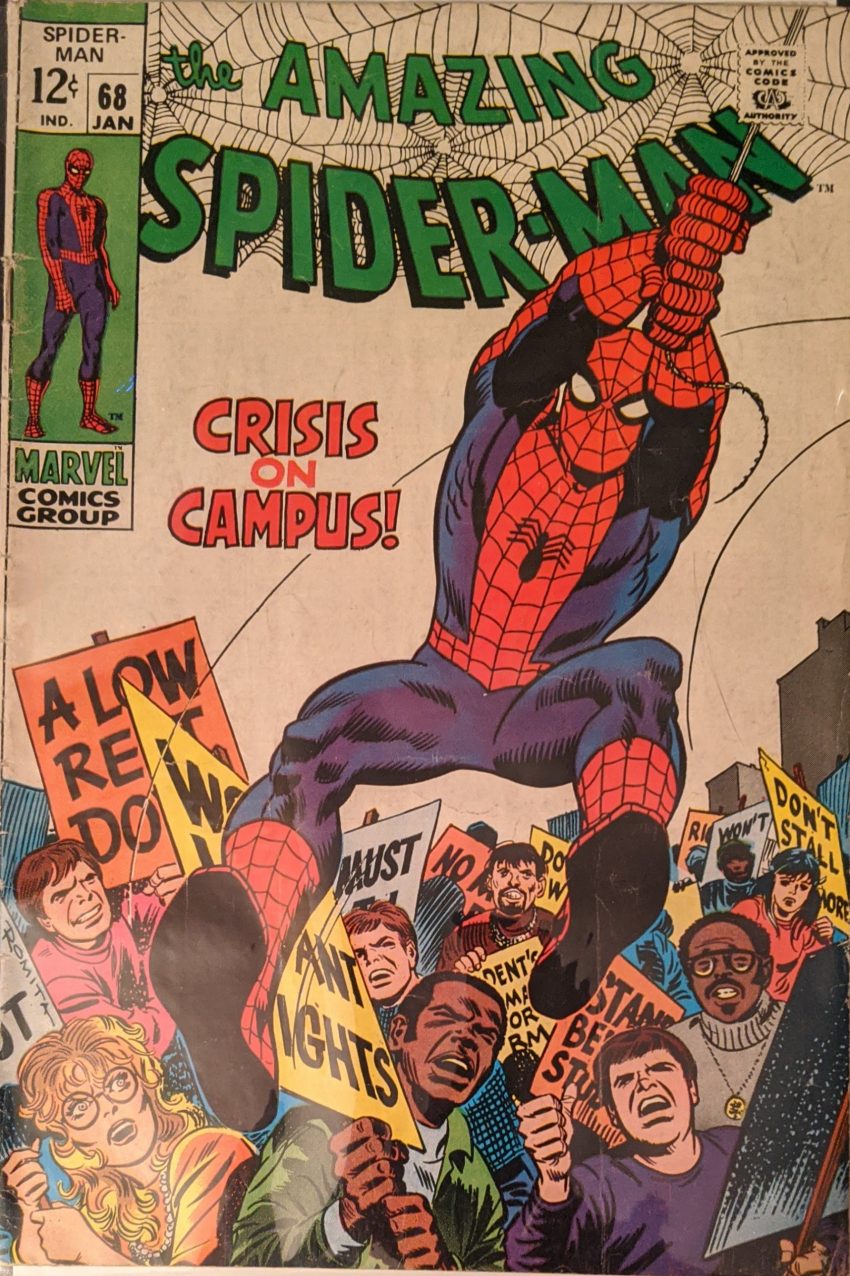 Another famous cover. How many products has that Spider-Man appeared on over the decades? Suddenly: Transparency. Of a sort. This month, Romita is credited with “storyboards,” while Jim Mooney is credited with “illustration.” Much less demeaning to Mooney. During this period where Romita was just laying out the book, it was largely because he was Lee’s new golden goose. Lee frequently called Romita “The next Jack Kirby,” and like Jack Kirby, pushed him to oversee and correct other artists across the line, spreading him too thin. Years before getting the title officially, Romita more or less became Marvel’s art director. At this point, Jack Kirby is just months from quitting Marvel, exasperated by never getting story credits, having already decided he wouldn’t give Marvel anymore new characters, while the relationship between Lee & Romita is going very well, so it’s only natural, I guess. Lee always seemed to want a house style for Marvel; First Kirby’s, then Romita’s. Anyway. This one starts with The Kingpin being briefed on a newly discovered clay tablet. This will prove momentous.

This might seem like a weird time to rip your shirt off and fight 6 big bruisers to prove how tough you are, but that’s just how Kingpin rolls. As he does so, he makes what I believe is his first-ever claim that what appears to be fat on him is actually solid muscle. After he beats them, he fires them, saying he can’t stand losers. He orders up “twice as many” for his next workout, and says once he gets that clay tablet, he’ll be ready for his final battle with Spider-Man. Who, speaking of whom, is swinging home lamenting that he hasn’t taken any photos in a while. Then he finds his bedroom window locked.

There he is, Randy Robertson, the newest member of the supporting cast.

Josh will be around a bit more, too, but he’s not in it for the long haul. JJJ is raging about not getting pictures of Spider-Man and Mysterio, but Robbie is distracted, worrying something’s wrong with Randy. Elsewhere, Peter & Gwen stop in to see Aunt May, who’s looking a lot better. She notes these 2 have been seeing a lot of each other, and says how happy it makes her. But after they leave, Anna Watson finds her looking very ill, with May saying she didn’t want to spoil the kids’ happiness. That’s no good, but we jump to the next morning, where Peter stumbles on a demonstration against that alumni housing, with Randy front and center.

Stan was trying to walk a weird line in a lot of books at this time. Trying to seem like he was on the kids’ side when it came to social issues, but also unwilling to fully commit. His heroes would usually privately support the right causes, but not actively and publicly. It was an odd choice, and he made it often. Things get more tense at the protest, with someone even recognizing Randy as the son of Robbie and calling his dad an “Uncle Tom,” but Josh & Randy squash that, and then Josh leads the protesters in rushing and occupying the exhibit hall. This is being broadcast on TV, which causes JJJ & Robbie to rush down there for the story, and lets Kingpin see an opportunity.

Whatever weird middle ground Stan is trying to live in, you can always tell he’s on the right side. For all his faults, the way he was keyed into social issues and seemed to be on the side of the kids is kind of remarkable considering how old he already was by this time. We’ve already seen later issues where he really gets into politics in ASM, but even in this, where the issue is made up, he’s making it clear where he stands on the real protests happening in the world outside this comic (And while debate will continue forever about who did what in the 60s Marvel comics, at the end of the day, Stan controlled what got published, so I feel fine giving him credit for this). Very cool. Anyway, Peter takes the opportunity to get some protest photos for JJJ, but behind the building, Kingpin and his goons are rolling up. Their first move is to set off a bomb near the protesters, so they’ll get blamed for it, and then use the confusion to break into the exhibition hall.

The 2nd time in 3 issues the villain of the story has encountered Peter Parker before Spider-Man. It’s very funny to me that part of Kingpin’s character design is that that gem on his neck is always glowing. Into the 80s, everyone dutifully followed that. “Just shining like a star at all times.” Anyway, he makes for the tablet, with Randy standing up to him, saying he’ll ruin their demonstration. Luckily for Randy, Spider-Man bursts in. Even as he tells the demonstrators to flee and call the cops, Randy still wants a piece of Kingpin. You gotta give him his courage. Meanwhile, Joe has shown up outside, and knows his son is in there with Kingpin, but the cops won’t let him in. Kingpin starts trying to gas the remaining guards, but then Spidey is on him.

Spidey hit Kingpin with one of his own goons! That’s hilarious. And here comes Randy, who Kingpin obviously just smashes into a wall. Guts will only get ya so far, Randy, but we appreciate your trying. This sets off Spidey, who rains a storm of blows on Kingpin, putting him down long enough to check on Randy and make sure he’s ok.

It’s sad how relevant this protest material feels. Guns pulled on them, arrested for the actions of upsetters using them… Sadly relevant. But, this is fiction, so things will probably work out ok next issue…