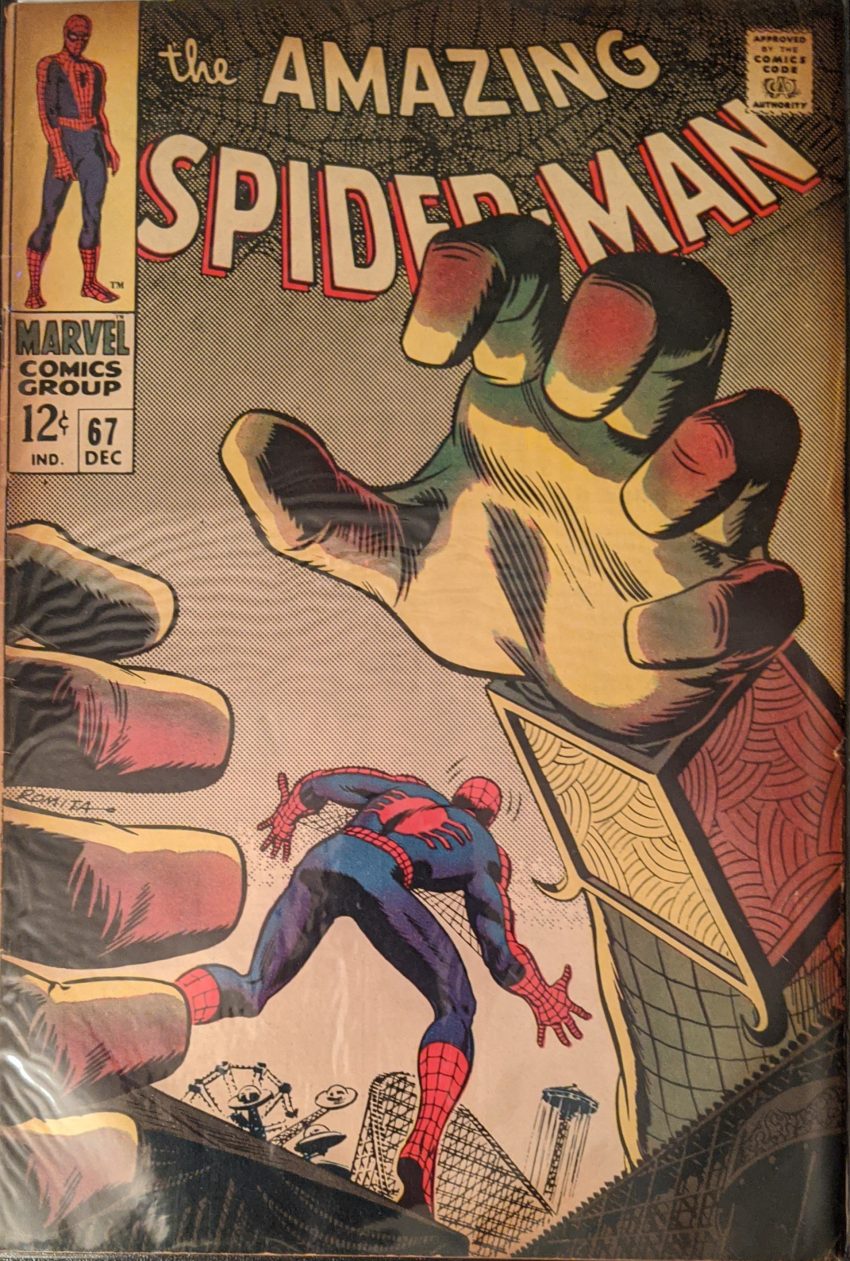 All of a sudden, John Romita does full pencils for this one. Maybe his schedule cleared up after finishing Spectacular Spider-Man Magazine 2. Sadly, it won’t last. But he’s inked here by Jim Mooney, so things are looking better on 2 fronts. Spider-Man is currently “six inches tall” and “trapped in a model of an amusement park” while a “giant Mysterio” attacks him.

Spidey seeks shelter, but it turns out he’s entered a hall of mirrors, and the mirrors surround him and start slowly closing in on him. At that moment, Aunt May wakes from a nightmare in which Peter was in terrible danger.

No one at The Bugle has any idea where Spidey or Mysterio might be, and Robbie says he might call Captain Stacy and see what he thinks. Then we get back to the fight, where Mysterio lets Spidey know the mirrors are covered in a deadly poison, so if he breaks them, he could still die. Seems like, if you’re really trying to kill him, maybe don’t tell him that. Spider-Man webs up the walls, “clogging the mechanism” and slowing their movement.

Spidey fights his way to the surface of the deep water he’s fallen into only to have a giant axe swing at his head. He just grabs onto the less dangerous bits and lets it pull him out of the water, as some monsters start approaching behind him. Spider-Man leaps up onto the ceiling from the axe, but Mysterio pulls it away to taunt him some more.

At least Spider-Man isn’t assuming the sea monster is real like he would in the 70s. He breaks free of the tentacles and bolts as Mysterio gets more and more upset that he’s not going insane. Spidey notices the attacks aren’t coming so quickly anymore, like Mysterio didn’t plan to work this long, and finally gets a moment to catch his breath. Then we cut to The Stacy home, where the phone is ringing.

It’s the first appearance of Randy Robertson. Randy doesn’t always get much time in the spotlight, but he always keeps popping back up in the books, even serving as Peter’s roommate in current comics. Spider-Man realizes he’s almost out of pages and better stop buying into all this, and goes on the offensive, telling Mysterio he knows none of this is real. Mysterio throws a giant knife at him, and he uses it and some web to catapult himself up and Mysterio’s allegedly giant head.

Love the contradiction between the dialogue and the caption at the end there. Pretty funny. But before we see Spider-Man get involved, we have a couple of detours.