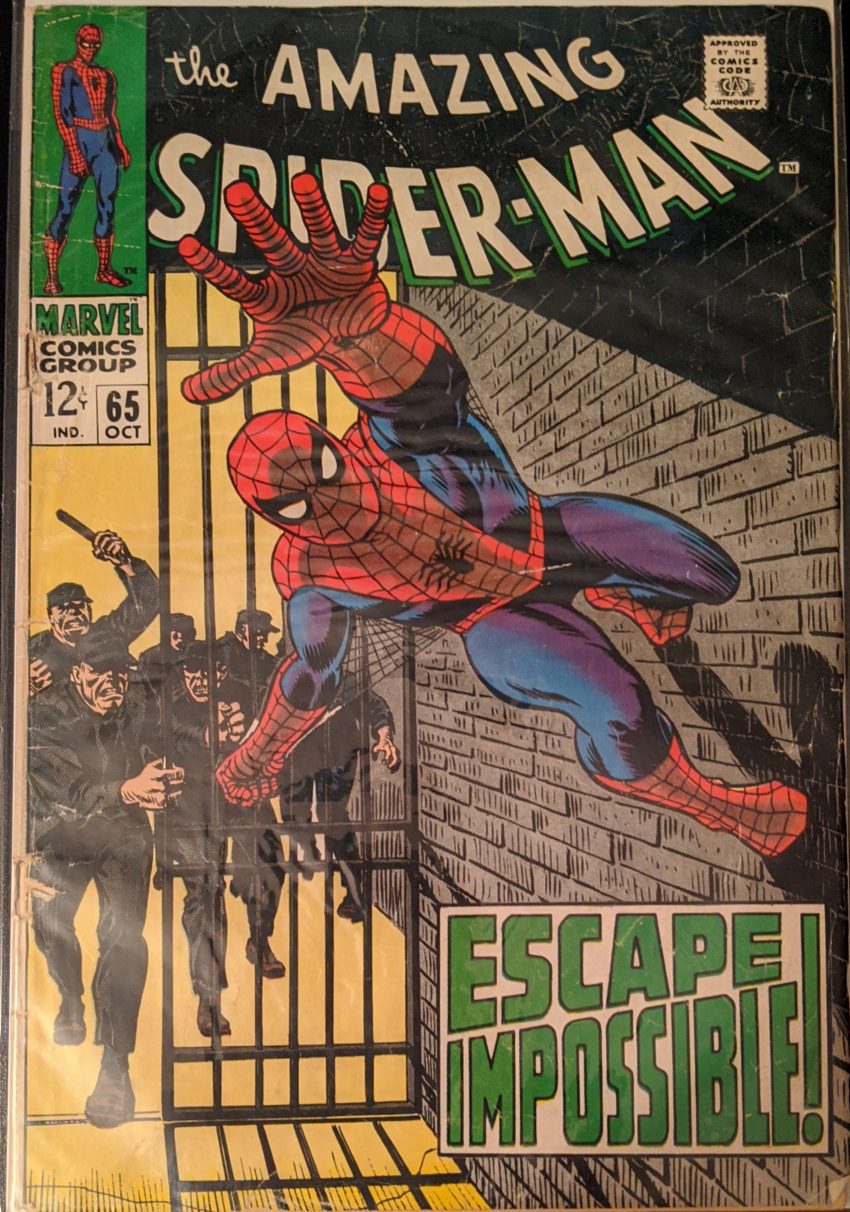 This month, Jim Mooney takes over penciling & inking, and the credit under Lee & Romita is “artistically aided by Jim (Madman) Mooney.” Doing the vast majority of the work, here! But I guess your prize for this lack of credit is getting your own Stan Lee nickname. At any rate, Mooney really gets Romita, and is a much better inker than Mike Esposito, so this one’s a real step up. Spider-Man lays unconscious on the street, and a growing crowd demands to unmask him.

I mean, look at that. There’s a new depth to the panels, and even more of Romita is shining through than before. Also, I’m no lawyer, but does anyone have a right to keep their mask on if they’re caught vigilante-ing? Seems like they would not. Gwen tells her dad no one knows where Peter is, and she’s worried something’s happened to him before they could make up. George says he’s probably developing film, and heads off to be with Spider-Man in the infirmary. Meanwhile, JJJ heads back upstairs to crow about Spider-Man being in police custody, totally glossing over the fact that Robbie’s getting looked at by a doctor for his injuries. At the police infirmary, Captain Stacy is having trouble keeping the staff from unmasking Spidey even though the police commissioner has told them not to when he finally wakes up.

Gwen begins to panic as the various goons drag George to the gate, but there’s no guard there, so they have to wait around to continue attempting to break out of there. Meanwhile, Spidey decides he’s been in bed long enough, but he’s really wobbly. He sees George in trouble, but isn’t sure if he should try to intervene in his current state. But, he’s Spider-Man, so…

Spidey keeps slapping the one guy around, saying he doesn’t care what happens to George, and the cons finally believe he wants to break out. That was close. Now they’re all looking to Spider-Man for an escape plan. He begins to come up with one, but we cut away to Harry Osborn, walking the streets looking for his sick dad.

MJ’s hair is still freaking me out. Comic book characters rarely changed their look in the old days. MJ’s hair stayed more or less the same until Todd McFarlane… except now I’m learning it didn’t! And Harry suspecting his dad is The Green Goblin is interesting. That makes sense considering what comes later. As usual, MJ gives Harry a really hard time for not being in the mood to party as he wanders off, and then we’re back to the prison, where the warden is mobilizing all their forces to stop the attempted prison break. Speaking of, Spider-Man tells the assorted hoods he’s gonna bend some bars on a window and find an escape route in the yard while they use George to get through the gates. He thinks to himself he hoped they’re loosen their grip on Stacy, but they still haven’t, and he doesn’t want to risk one of them hurting him. So he crawls out a window, and the goons make the guards let them through the gate.

“I’m in the middle of faking a prison break, I better stop for a chat!”

Whoops. Under cover of darkness, Spider-Man is able to start picking the goons off like the villain in a horror movie, starting from the back of the group and working forward. The hoods start to panic as they realize their numbers are dropping, but Spidey’s able to get everyone except the leader, who’s holding George. Bad time for the back-up generator to kick on and show him his friends all webbed up. He begins threatening to kill George if he’s not granted a safe escape, and Spidey thinks he has no choice now.

Oh boy, Mysterio. That was probably Spider-Man’s best bet at not becoming a fugitive for the next 100+ issues, but his worries about Aunt May come before everything else. I gotta say, it’s really fun to be back in these simpler times. These comics are just fun.