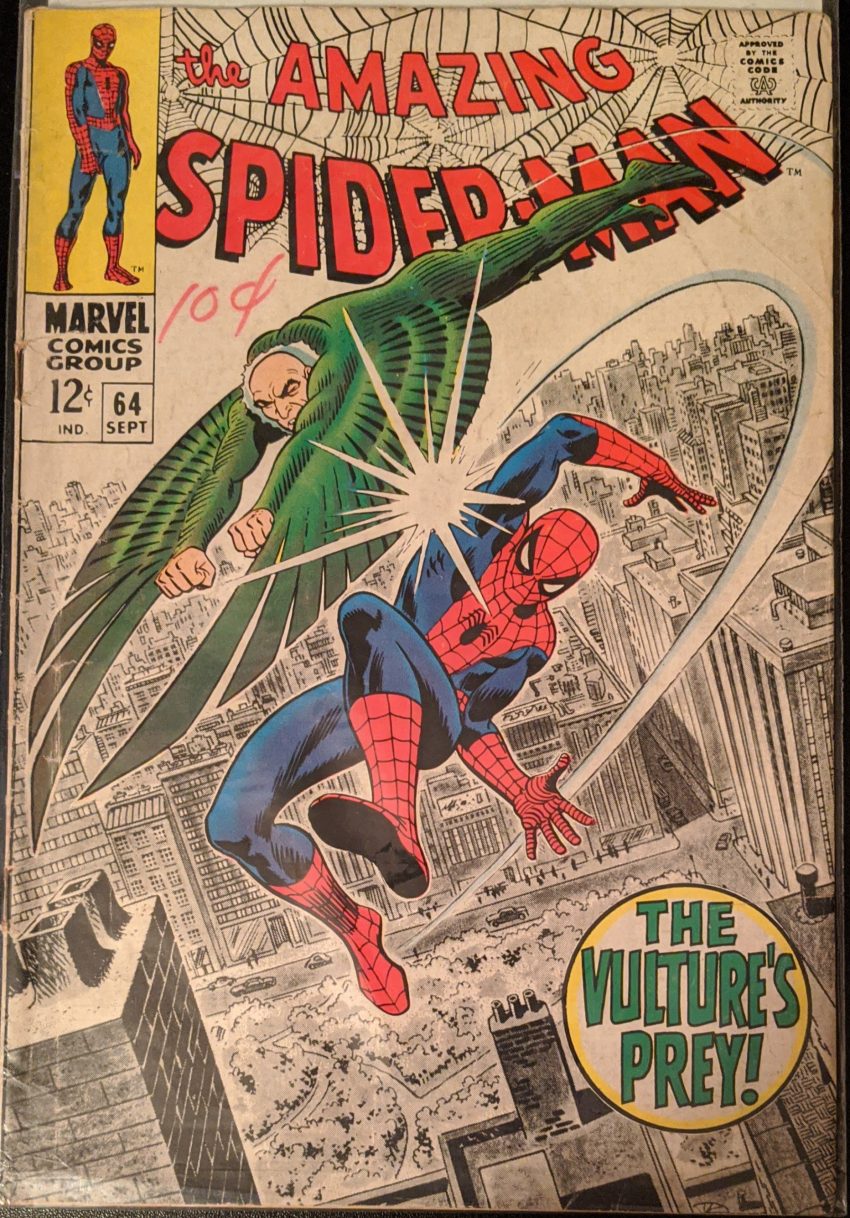 During The Great Ebay Hysteria of 2018, I quickly found I could get most issues in this range for under $10 if I was vigilant and not too picky. But for some reason, this one was really hard to get. No one was selling cheap ones. I eventually found one to my liking, but it took a lot longer. Who knows why. Don Heck is created with “augmenting” Romita on this one. This obfuscation of credit bums me out a little more with each issue. Romita is obviously providing tight layouts. His style comes through often even though the book has passed through 2 more pairs of hands. But he’s not doing full pencils and they’re trying to hide it. It’s gross. Anyway, The Vulture is about to attack Spider-Man. Robbie has found JJJ an unnamed new photographer to get photos, and we’re off.

Seems like every villain was always “even faster and/or stronger” than the hero remembered every time they met until, like, the 90s. Vulture kicks a corner of the chimney Spidey was on as our hero dodges away and then seems to disappear by the time Vulture circles back. Believing Spidey may have fallen to his death, Vulture swoops in to investigate, only for the hiding Spider-Man to grab his wing with his one good arm. He can’t hold on for long, but he’s brought his foe in close.

SZTAT! But our man shoots a web around Vultch’s legs, surprising him and throwing him off balance. But that plan goes sideways as Vulture just yanks him off the wall and starts dragging him around in the air, even flying across the street and slamming him into Robbie, JJJ & the unnamed photographer (JJJ says Spider-Man tried to kill him).

Joe Robertson establishes himself as JJJ’s polar opposite once and for all. As Vulture swoops back in, the enraged JJJ tries to hold Spider-Man in place to be hit, but our hero manages to dodge him (and JJJ) out of harm’s way. He webs up the raving Jameson and goes to check on Robbie, who seems ok, but the Vulture is diving back in. And then… We switch to Aunt May’s place, where Mary Jane has just shown up… with a perm!

I never knew about MJ changing her hair. I wonder how long it lasts. Gwen and her dad talk about Peter being ok, and when George says he couldn’t reach Peter or Harry, Gwen mentions Norman hasn’t been well lately, which really concerns George. But then they walk by The Bugle, and see the commotion on the street below the fight. Betty & Ned are down there, and tell the Stacys that Robbie, JJJ & Peter are trapped up there, not knowing Peter “left.” So now the Stacys are super worried about their guy. He’s doing ok for a minute, tho.

Spidey tries to tackle Vulture, but that just lets him start wailing on him, just beating the crap out of him for almost 3 pages. He’s finally forced to let go, almost passing out, spinning up a web cushion to land on the street without splattering. Vulture swoops down to inspect his handiwork.

Egad! Will they unmask Spider-Man? I mean, probably not! We’ll have to find out next time, behind one of Romita’s more famous covers.