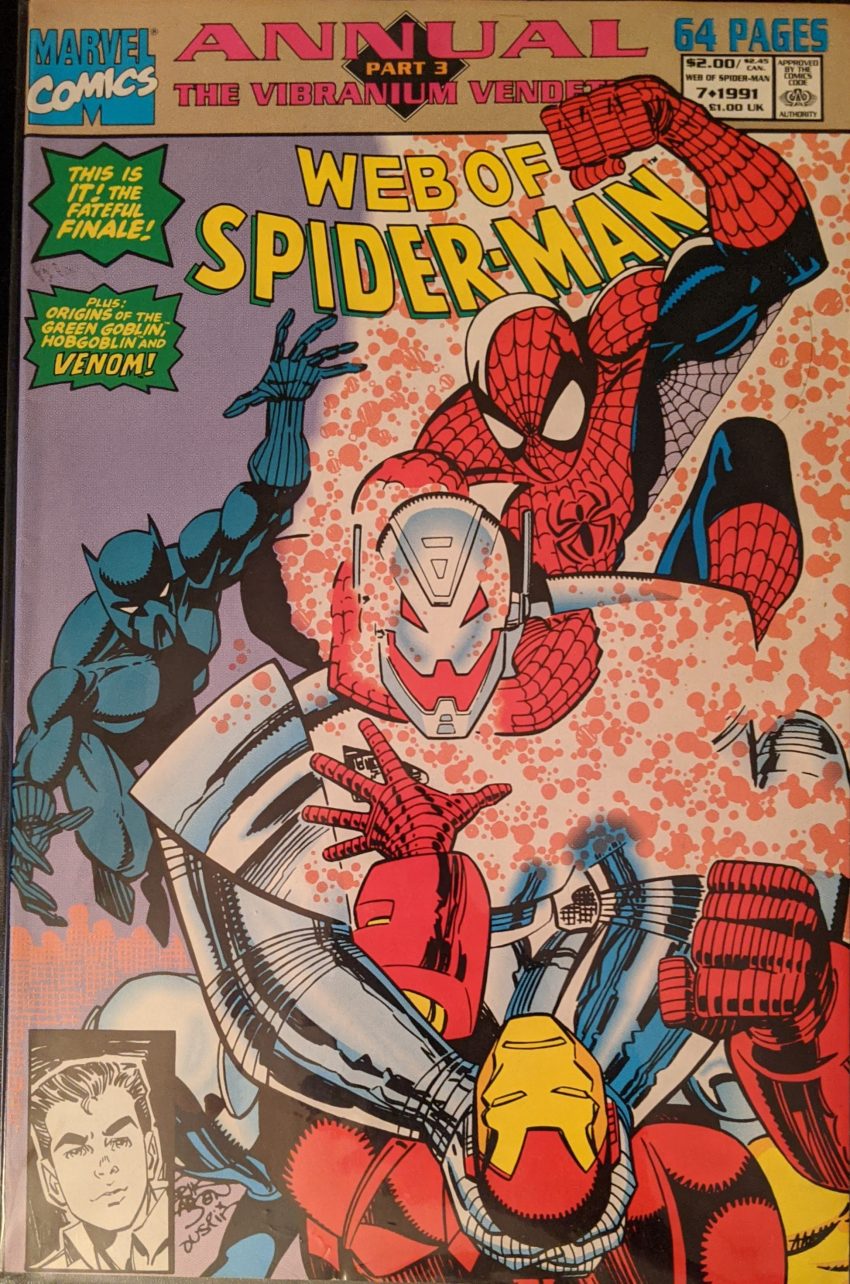 Time to see how all this shakes out in part three, The Machine And The Man. Guang Yap is back in the penciler’s spot, with “K. Aiken” and Bud La Roas on inks. Not sure who K. Aiken is. Ultron-13 has arrived at The Kinpgin’s tower, dressed as anyone in the Marvel Universe who doesn’t want to be noticed would be, in a hat & trenchcoat. But he burns them up once he gets to Fisk’s office, disgusted to pretend to be a human. They reiterate for the reader that they both want that synthetic vibranium and that they don’t trust each other, and then we’re off to see the good guys at Stark Enterprises. Iron Man is uploading the data he stole from Roxxon to his computers, but warns he didn’t have time to get much. He does see that their process was unstable.

Casually tossing a Spidey head cribbed from Romita, Sr. in there. Elsewhere, Ultron-12 continues to produce androids to take over the Earth once he’s wiped out all humans, and then we’re back to ESU so Peter can encounter those guys working on Checkov’s Botany Project. He thinks T’Challa was supposed to meet him there, but didn’t show up, and then realizes he must’ve gone to confront Roxxon directly.

Meanwhile, Iron Man is meeting with Dearborn, who once again naively assures him Roxxon would never do anything wrong. Then the military shows up, announcing they’re the new security on the project, to Dearborn’s surprise. As they take their positions, one of the guards they’re relieving is shocked when his rifle starts to melt.

Inside the warehouse, Sunturion finds Ultron-13 driving a giant mecha thing up through the floor. Sunturion’s beam attacks are able to damage Ultron-13’s big machine, and after stunning Sunturion, Ultron decides to just make off with a crate he can carry, ending his alliance with Kingpin. As he comes to Sunturion notices a bunch of the crates containing the vibranium have collapsed because all the screws melted. Uh-oh.

Spidey and T’Challa find a small army of robot soldiers in their way and get to fightin’. But what the robots may lack in fighting ability, they make up for in numbers. Meanwhile, IM and Sunturion have traced the vibranium back to Ultron-13’s lair, but he blasts Sunturion out of the sky with some giant laser weapon. Iron Man manages to destroy the weapon, but his repulsors aren’t doing much against Ultron-13’s adamantium body.

It’s funny to think how Kingpin has evolved. He used to solve all his problems with his fists, but by ‘91 his transformation into a master manipulator is complete. That’s it for Ultron-13 in this story. IM and Sunny race their crate of vibranium back to the campus, where its metal begins to melt. The building housing the rest begins to collapse, and the heroes aren’t sure what they can do to stop the effect from spreading to all of Manhattan.

As much as “Manhattan destroyed by company shill having no backbone” would be an amusing headline, Iron Man decides it’s up to him instead. So he… digs a tunnel down into the Earth with is repulsors, and then figures out where the school is, and then digs a tunnel back up, causing the whole collapsed building to sink. And all this in, like, minutes! Haha, ok! Wow. That is a very 1960s solution.

And that’s that. Pretty weird story, all told. Black Panther barely got to do anything, in spite of being as big a science wiz as Tony Stark (At least). Iron Man didn’t do much, either, UNTIL he did something totally bananas. But even Spider-Man didn’t do much, either. The villains were really driving the story, with the heroes mostly in the dark all the time. Strange. Next up, rather than finish the Outsiders story immediately, it’s a Rocket Racer short by Tony Isabella, Paris Cullins, Dave Cooper & Marie Javins.

Marvel Tales was a long running title reprinting old Spider-Man comics. Back-ups in that book (Necessitated by 70s comics only having 17 pages of story for awhile) introduced Spider-Ham to the world, but I wasn’t aware any new, in-continuity stories were lurking in those issues. Hm. I have long since forgotten this footnote from my youth, obviously. I wonder what else went on in that title. Or why Speed Demon sued Rocket Racer. Or who this guy RR works for is. Or anything about this story, really. As Rocket speeds away, he thinks that “Sluggo” is his boss at Silver Sable International, which seems rather unlikely, but ok. Speed Demon zooms past him to taunt him some more, their fight eventually taking them inside Radio City Music Hall. All but the first and last pages of this story are told in 2-page spreads, which are hard to photograph, and really, it’s just Rocket Racer and Speed Demon. Eventually, RR manages to land one of his rocket-powers punches, staggering SD long enough to beat him unconscious.

But… he’s already Rocket Racer… The bat reference would imply this is where he chooses a superhero identity, like Batman. Eh, whatever. This is followed by the brief origins promised on the cover for Venom, Green Goblin (Which is really a history of everyone who’d been GG to that point), and Hobgoblin. Then, finally, the rest of the Outlaws story, as Silver Sable, Will O’ The Wisp, Prowler & Rocket Racer fight Sandman, who does a pretty good job dealing with all of them.

Silver finds their target being loaded into a helicopter, her captor holding a gun to her head. Meanwhile, Sandman notices she disappeared, and as Prowler tries to keep him distracted, Will O’ The Wisp announces he’s seen into Sandman’s mind and won’t fight him anymore. Sandy takes out RR & Prowler and heads off to find Silver.

Thus, Sandman finds his way into Silver Sable’s employ full time, a position he’ll keep for a long time. I really liked his redemption, and was very upset when it was reversed due to the release of Spider-Man 3, comics always doing some pathetic attempt to cash in on stuff happening in any superhero movie. A shame. And with that, we’re leaving 1991 to hop all the way back to 1968, and pick back up with Stan Lee, Don Heck & John Romita, Sr.