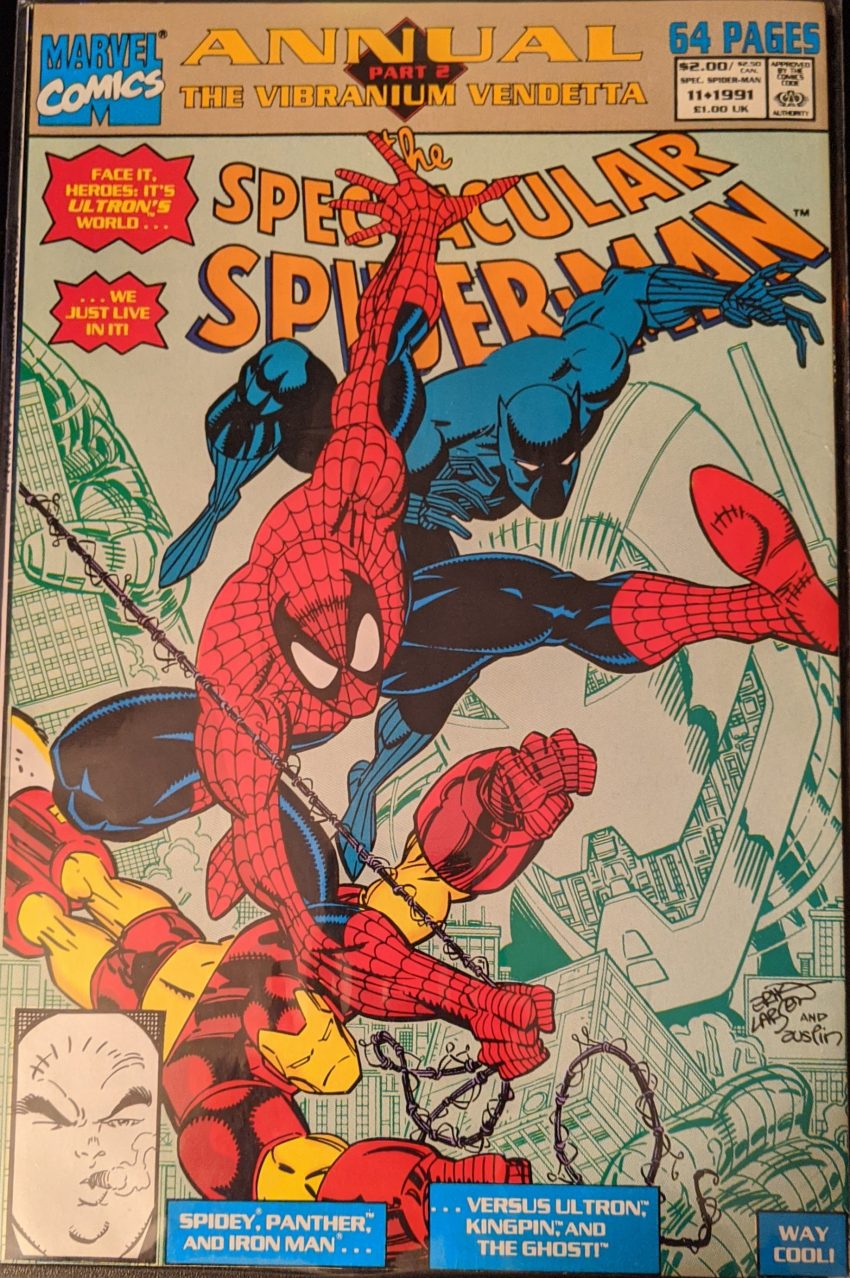 Time for part 2 of The Vibranium Vendetta, entitled The Ghost And The Machine. Get it? Great. David Michelinie is joined for this round by the great Marie Severin & Bon Sharen. I wouldn’t have told you Marie Severen was great at 13, tho. Like the art in the previous issue, it feels way out of step with what was happening in 1991, which means it’s aged a lot better, in my opinion. Ghost & Sunturion are having a shootout while teleporting and disappearing all over the room, causing quite a lot of damage in a short time and catching the attention of Iron Man, who was on his way to check the place out anyway, suspicious like Spidey & T’Challa were. Ghost decides he’s had enough and bails, and Sunturion turns his fury on the heroes until he gets a zap in the face from Iron Man.

Ghost & Sunturion are both stuff from the storied run on Iron Man by David Michelinie, Bob Layton & John Romita, Jr. in the late 70s & early 80s. (All 3 returned to the character not too long before this, but not at the same time). Must be fun for Michelinie to dust this stuff off. As the heroes depart, Spider-Man grumbling, Dearborn discovers one of the guards has kept a bunch of coins melted together as a souvenir, and gets upset. He regrets it later, tho, recapping the deal with the vibranium and thinking surely his boss wouldn’t lie about the dangerous material being let out into the world, would he? I don’t know, Arthur, how many times has Roxxon been caught doing something evil on this blog alone, not even in other superheroes’ titles? Come on, buddy. Iron Man suggests the heroes use their individual resources to look into this and reconvene tomorrow night, and they all agree. Peter gets home to find MJ’s gone to a premiere with her soap opera team, so he’s left to just watch TV and go to bed. Meanwhile, The Ghost reports back to Kingpin, who’s already heard he failed.

Ultron-13 is already made of adamantium, but he recaps how he hopes to add vibranium to the mix, as well, making him virtually indestructible. Like Captain America’s shield, also a mix of the 2 metals. The next day at ESU, Peter’s newly introduced pal Chip tells him Roxxon is storing vibranium at the school for awhile, but otherwise taking their research elsewhere.

Spidey and T’Challa easily infiltrate the site, but a squad of armed goons that Severin easily sells as plastic-y and inhuman attacks them, calling them “humans” and confusing our heroes right off the bat.

Ghost & Ultron-13 start mixing it up as we turn to Black Panther and Spider-Man, quickly learning their foes are robots and starting to take them apart. Dearborn sees the commotion and gives the order for staff to evacuate.

While they keep at it, Dearborn and some goons attempt to escape in a helicopter, but are stopped by Iron Man, who asks them nicely to set back down. Instead, they fire a missile at him, and Dearborn comes out as Sunturion. So we got 3 different battles going at the same time here, and we return to the first one, as Ghost & Ultron-13 find themselves unable to do much damage to each other.

Love the energy on Ultron-13 in those 2 panels. Sunturion lets loose with his “omnidirectional energy burst,” which Iron Man is prepared for, having been hit by it before, but which the Roxxon helicopter is no match for. Dearborn sees what he’s done and is horrified, but it’s up to Iron Man to set the chopper down safely. Dearborn, to his credit, rushes to see if his employees are ok, and while he does, Iron Man begins transferring info odd the server they were running off with. Dearborn threatens legal action, but IM points out that would only surface whatever they’re trying to hide in court.

Looks like the villains will be united in the final installment. But wait, what about those plant guys that keep popping up…?

Uh-oh! We’ll see how that all wraps up next time. First, tho, more with The Outlaws, coincidentally named by Silver Sable with the same name most of them were briefly called when working with Spider-Man. Same team from last issue on this, as Sandman runs some hunters off from the operation he’s guarding.

So that’s why Sandy seems to have gone back to villainy. A tricky gambit. He reports back to his bosses, who have kidnapped a diplomat’s daughter to get him to step down from his post, and Sandman is very uncomfortable with the situation. He is about to get more uncomfortable.

Silver, Rocket Racer & Prowler easily slip inside the monastery, and when they come under fire from the kidnappers, Will O’ the Wisp is there to surprise attack for them.

We’ll see! Next up, a Rhino story that rather surprisingly comes from a plot by Gerry Conway. It also features script by Terry Kavanagh, pencils by Ron Wilson, inks by Bud La Rosa and colors by Kevin Tinsely. Rhino, back in the shoulderpads look McFarlane gave him, smashes into a bank vault, leading a team of goons in stealing some money, just saying the word “money” over and over, but then Spider-Man shows up.

Looking pretty 1960s here. Rhino pins Spidey to a truck, crushing him into the crumpling metal. Spidey webs his eyes, flagrantly ignoring how this suit was protected against that last time we saw it (In ASM 319) and gets himself free. Rhino’s goons decide to just make off with the money without him, but the cops arrive and stop that. Spidey and Rhino mix it up some more, Rhino continuing to just say “money” over and over, this is making no sense to me. Then he smashes through the ground into the subway and gets hit by a train.

Right-oh. I guess this is actually Conway’s official exit from the books. The annual closes out with one of Fred Hembeck’s “Petey” comics, dense and wordy comedy strips about Peter Parker as a boy.

They have, in all honesty, never really been my thing. Petey finds Flash Thompson and Liz Allen running down the street on the way to the local soda stand, where they’re giving away free banana splits. Petey says he can’t go, it wouldn’t be responsible, bu then thinks it would be irresponsible to pass up free things in this economy, and takes the kid down there. He finds it super crowded and learns a fictional version of “Kids Say The Darnedest Things” is being filmed there, and anyone chosen to appear gets the free ice cream.

Petey hears this has also affected the theater Aunt May & Co. are at, meaning he’s gotta book it home so they don’t catch him. Hijinks ensue, like running down JJJ on the sidewalk and running through traffic with the baby in tow. Very wacky.

Petey is pretending to read Atlas Shrugged there, which is kind of funny. Steve Ditko was a big proponent of Ayn Rand and her Objectivist nonsense all his life, more and moreso as he aged. He even created a long running, mostly self-published Objectivist superhero called Mr. A.

The baby is, of course, Robbie Baldwin, aka Speedball, so there you go. Petey would pop up all over Spider-Man projects in this period, and it just never gelled for me. In the 90s, it felt so off base, but even now, it’s not particularly funny. Ah, well. Come back next time for the big finale to the 2 main stories and who knows what else, I’ve forgotten.