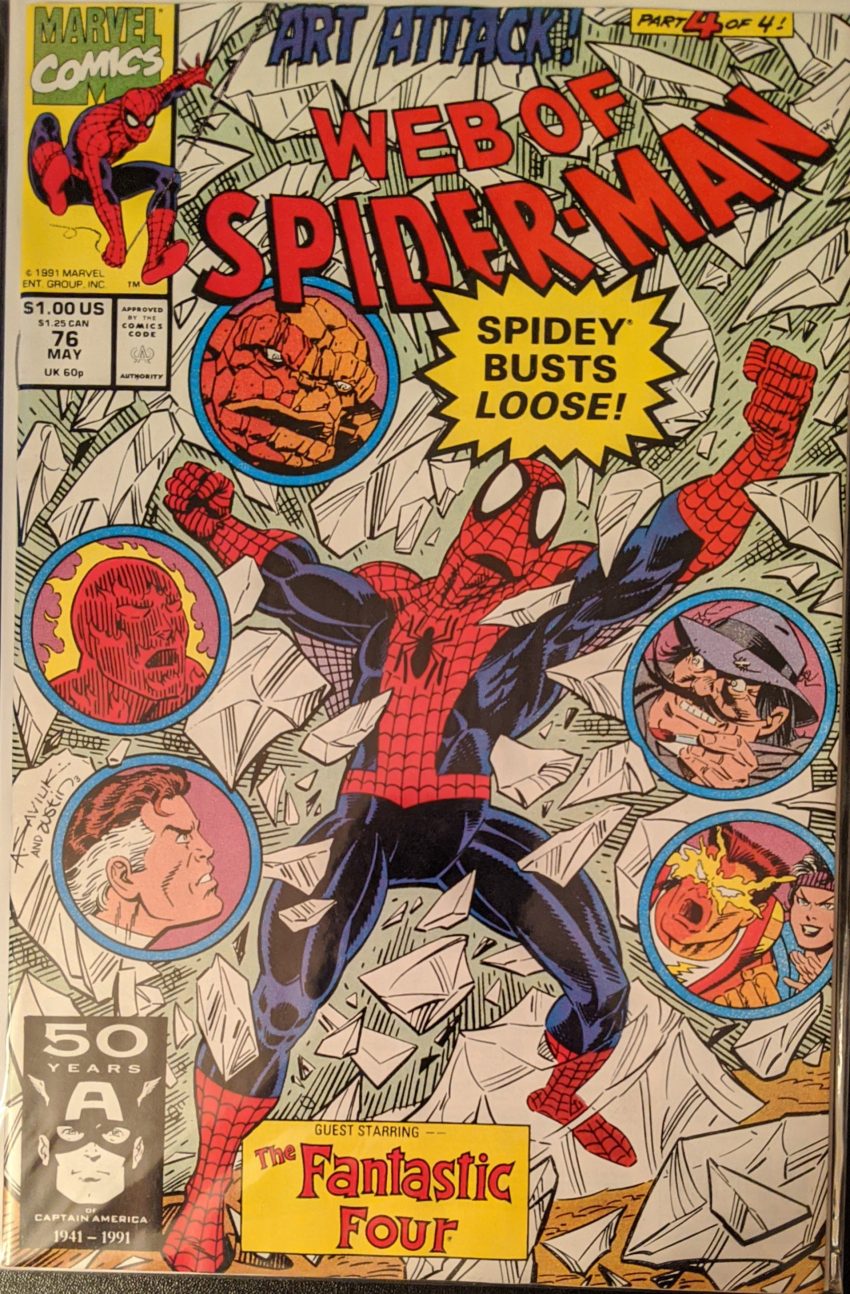 Time for the big finale to Art Attack. The 4th part of a story originally announced as a 3-parter. Things really didn’t seem to go as planned here. Things begin with a recap of how Spidey got trapped in ice intercut with him trying to bust loose, revealing he took a deep breath before being frozen, and exhaling gives him some room to work. I’m not… sold on this… but it’s comics, I guess. Once the recap is done, he tries his best, and…

I like when comic characters directly reference the big goofy sound effects sometimes. The villains’ painting has turned into one of Spidey & Torch chillin’. The underlings are angry, Painter uses the excuse to recap who they are for you if you just tuned in, and then they all decide to just keep up their plan to freeze the city. Kind of a pointless scene besides making sure the reader knows who they are.

MJ, I doubt Susan Lucci has has much supervillain experience as you do. Meanwhile, a conversation between Reed Richards and Captain America reveals the FF and Avengers are spread out all over the city helping while Reed tries to figure out what’s going on, including our old pal Quasar making sure ambulances get to hospitals.

Reed Richards’ plan for solving any problem, step 1: Make Ben lift a gigantic machine. After another really pointless scene of The Avant Guard hamming it up and not actually doing anything, Johnny drops the knowledge:

Yes, all this is Isabella bringing back one of the most obscure 60s villains possible. The notion of The Painter feels much more at home in that sillier time. A whole parade of extremely goofy villains made appearances back then and were left there. As this guy shoulda been. They crash into the room and find the 3 villains waiting for them. Torch tells The Painter he should’ve stayed retired as the mix it up, which does beg the question of where he’s been for the last almost 30 years of comics. This storyline is only his 2nd appearance. Anyway, Bora extinguishes Torch’s flame with her wind powers, calling it the power of her art or whatever, but, like, lady, it’s the power of your wind that’s doing the job here. Torch doesn’t have to worry, tho.

Torch returns the favor by finding out his flame “dissipates the energy” of Spark, reverting him to normal size. Then they go to finish up, but The Painter waves his paintbrush and his goons are back in fighting form between him and the heroes. But when the heroes complain that this is getting repetitive, Painter agrees, saying it offends his genius and they surrender.

Always sucks when you explode into a zillion bugs. Bad day for anybody. Spidey webs up a shield in front of him and Torch burns through the bug wave, our hero noting the bugs seem to explode into some kind of gas when they hit anything. Torch is extra grossed out, but Spidey notices what’s left of The Painter’s face is nothing but canvas. He was never a real guy at all, just a suit for the bugs. I guess. No real explanation is given.

Good bit showing the world thawing out in those panels of the building. This story leaves you with so many questions, and yet I don’t care what the answers are. And neither did the rest of the reading public. Spark never appears in another comic. Bora is on a computer screen more than a decade from now, one of the mutants who lose their powers in a massive event later, and that’s it for her. And The Painter apparently has an extremely minor cameo in a 2012 comic I don’t have. The book is closed on these guys. No great loss. Speaking of villains who don’t exactly join the ranks of the classics, come back next time for an all-new one.