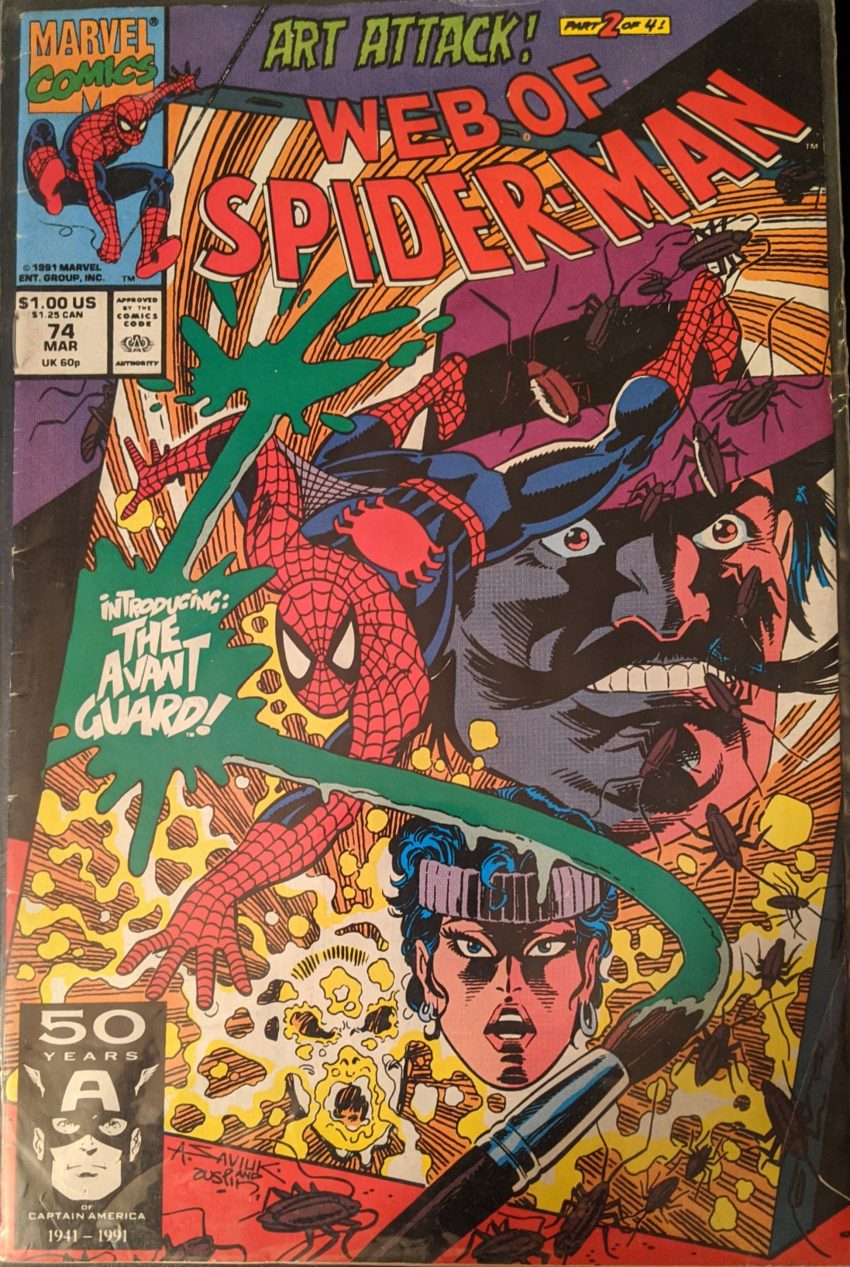 I’ve talked about having the 2nd part of various recent 2-parters from my youth, but this one’s worse. For some reason, I had part 2 of this 4-part story, and that’s it. Why? How? As usual, I don’t remember. Maybe the issue itself will jog my memory. This one’s by Tony Isabella, who’s been floating around the background of the Spider-Office for awhile now on annuals and such. And so are the next 2, despite the original plan. So, Peter & Kristy are watching a performance artist named Spark who just sits on stage in the “Thinking Man” pose. Peter doesn’t get it, Kristy says he’s awesome. Where is MJ? But then, Spark is interrupted.

Oooooookay. Kristy is the only one in the room who likes the show, and Spark gets mad and storms off stage. This is apparently a fundraiser with an attached art exhibition. This feels like part 2 of a story, but not last issue’s story.

This is warming up to be a low grade parody of a Grant Morrison-type comic. I don’t remember a word of this so far. At the art exhibit, Peter thinks to himself he brought Kristy here after she showed an interest in art last issue. Ok. He also sees a painting he apparently last saw way back in ASM 22 (We’ll see it someday). Then some old ladies mistake Peter for one of the painters and get offended when he doesn’t know anything about the exhibit.

I am not familiar with Colossus going by “Peter Nicholas,” but Wikipedia says he has. Not a big X-Men guy.

Uuuuuh… sure. The guy says they have to “unleash the pain that makes them artists” and turns Spark into something we can’t see which horrifies “Bora.” Back at the art show, all’s forgiven and Peter is sketching Kristy while telling Peter he feels like he remembers Bora, but he has amnesia and isn’t sure. Oh, really? When did that happen? As Colossus, he apparently met her in Moon Knight #35. The implication that Peter & Colossus look a lot alike is pretty odd. Anyway, suddenly there’s screaming and people running in terror.

Given his excuse, Peter ducks out and Spider-Man soon appears. He & Spark mix it up for a couple of pages, Spark incorporating this into his “performance” as he rants nonstop during the battle. Spidey is surprised to find Spark is really strong. He webs him to the floor, but it doesn’t take.

The Painter, as I guess maybe he’s called, tells Spark & Dora he’ll let them be part of his masterpieces, but that they must be pure of purpose and serve art and various other things. Also he paints them into butler & maid costumes.

This is essentially Spider-Man starring in an issue of Grant Morrison & Richard Case’s Doom Patrol. This feels very odd. I guess it will continue to do so next post.