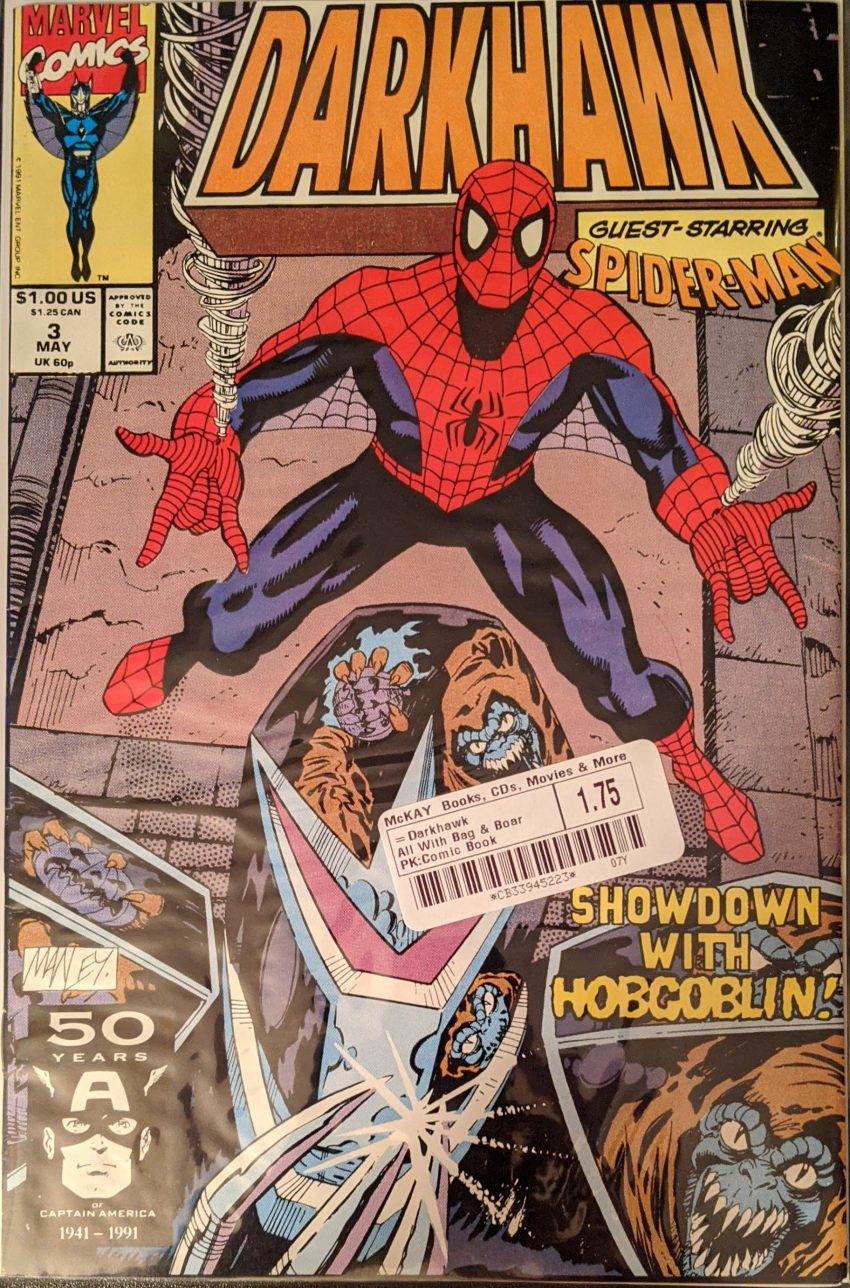 More Darkhawk, Spidey & Hobgoblin today. This one begins with Chris driving an old car top speed toward a wall before jumping out, turning into Darkhak, stopping the car with his hands like Superman, and then blowing it up with an energy beam.

That was one of the most ridiculous sequences I’ve ever seen in a comic book. Why did he blow up his own car??? What… is happening??? He keeps getting in trouble as Darkhawk and then just switching to his regular self to get out of it, how many times can that work? He later thinks to himself he’s lucky he only paid $75 for that car!!!! WHAT IS HAPPENING??? Chris has some family drama and some high school drama that really is never going to matter to us again, so whatever.

HOOTCHIE AND MONGO. Holy CRAP. What is going on. This is the weirdest comic I’ve read in a long time. Hootchie and Mongo. Just regular, average names for people. Chris goes to spy on the illegal gun shipment HOOTCHIE AND MONGO tipped him off to, and then Darkhawk starts busting it up. But also:

…Literally has no molars…

Wait, why are the gun guys listening to Hobby? And while we’re at it, if Hobgoblin is sort of operating in the Christian zealot mode, and he thinks Darkhawk is “Satan-spawn,” why would he want Darkhawk’s power? This is all nonsense. Spidey thinks he got a tracer on Darkhawk last issue, but it just vanished until a few minutes ago, since DH and Chris swap bodies or whatever. Spidey fights the goons while Darkhawk fights Hobgoblin. Then the worst dialogue I’ve ever read happens.

I can’t even. I literally cannot. And demon-powers Christian zealot The Hobgoblin just dropped by The Tinkerer for a net? Come on, man, this is ridiculous. This comic is nuts. And, look, Darkhawk just did his own Lifts A Heavy Thing, only it wasn’t a heavy thing, but a tight thing. They keep fighting and Darkhawk is pushed far enough to decide he has to kill Hobgoblin, as he did last issue.

Pumpkingram!! How was this man allowed to run the Spider-Office again!?

Ok, man, whatever. Then a couple from the nightclub wander in and distract the heroes from their weighing the merits of murder, and Hobgoblin grabs the woman and flees out a window.

Having the most popular superhero in the world punch your hero in the face and call him an idiot is, um, a choice.

Last issue was pretty bad, but this comic was a disaster. An atrocious mess. Oh my goodness. How was Darkhawk a “hot” character back then with stories this terrible? I cannot get over the head of the Spider-Man department so utterly misunderstanding one of Spider-Man’s biggest villains. I mean, forget the new, McFarlane, religious zealot angle. That wasn’t even anywhere near in character for before. That coil joke hurt my SOUL. Woof. I’m going to need time to recover from this one…