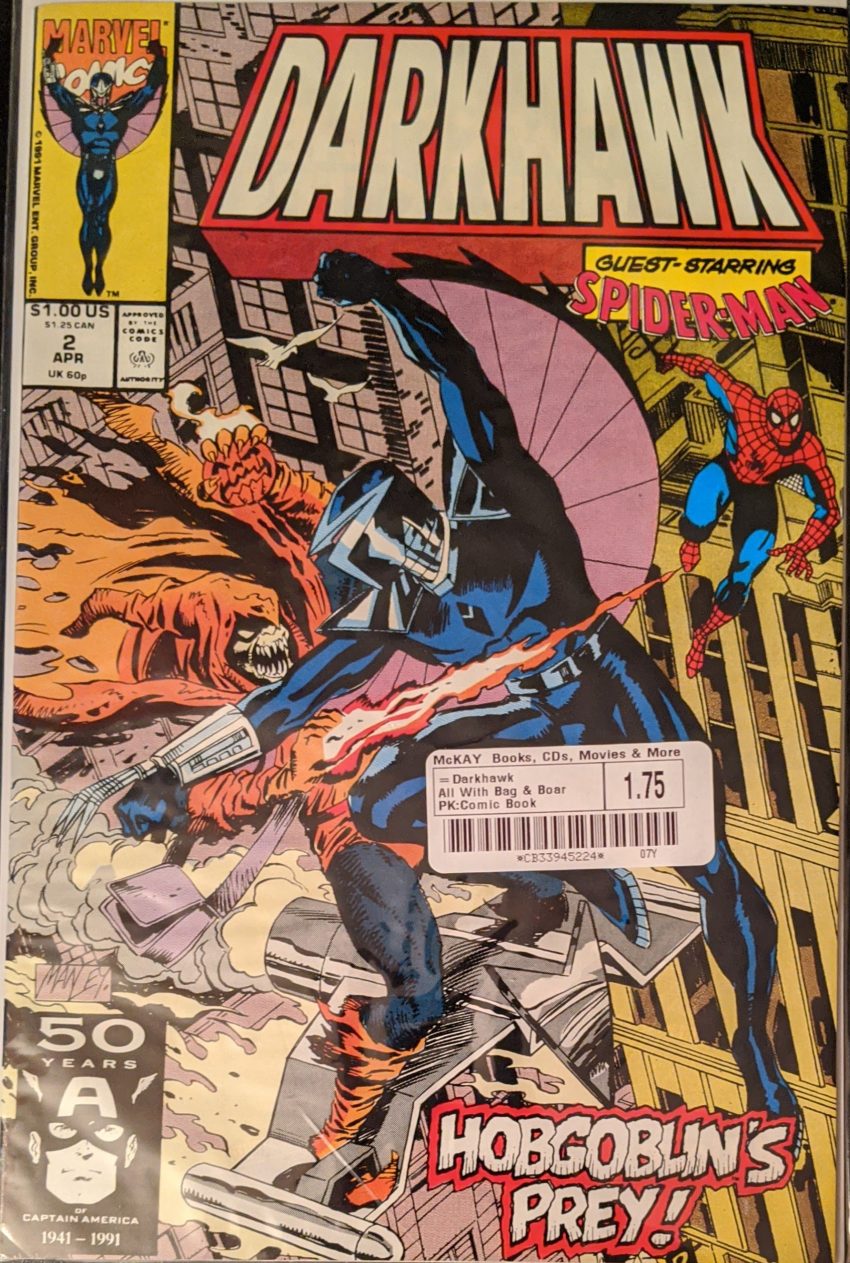 Oh boy, it’s Darkhawk. One of the “cool new heroes” of his era. I mean, he’s got “dark” in his name, instant hit. But look who’s with him. Not just Spidey, but Hobgoblin, too. I had known about this guest spot since it came out, but never got it, and haven’t read it. This should be interesting. How will another title handle the goofy mess McFarlane has made of Hobgoblin? Let’s find out. Hang on, this issue is written by Danny Fingroth, recently returned editor of the Spider-Line. Huh. With pencils & inks by Mike Manley, and colors by Joe Rosas. Every once in awhile, Marvel decides to try to recreate Spider-Man. Like, Nova was supposed to be a new Spider-Man for the 70s, a teen with powers, but in the 70s rather than the 60s. Darkhawk was sort of that for the 90s. He is Chris Powell, teenager, who found a magic amulet or whatever that turns him into Darkhawk. He’s got wings, a grappling hook thing on his wrist that can also be Wolverine-esque claws, and so forth. Actually, at this point, it seems like he’s still figuring it out. The issue opens with him busting into the office of a mob guy.

As soon as Darkhawk gets done threatening this guy, Hobgoblin crashes into him, saying, “Many thanks, hero! You’ve saved me a trip to find you!” That… doesn’t sound like McFarlane’s Hobgoblin… This begins a battle.

Fingroth is remarkably managing to make Hobby not sound like he used to or like he should now, instead going for a “mwu ha ha” type villain. Amazing. Having been chumped by the villain, Darkhawk goes careening into an alley, where’s bleeding to death until he turns back into his regular self almost by accident. He finds he’s ok in human form, but Hobby comes zooming in.

So Hobby seems totally out of character. Just the thing you want from the editorial of all Spider-Man comics (Well, 3 out of 4, but soon all). Chris goes home and advances his personal life plot that we don’t care about, and then hears the cackling of a villain outside.

Huh. So Fingroth is referencing SM 6 & 7 (Not sure why they called out #5), just very, very poorly. I guess that’s better than nothing… I guess. Hey, time for the star of our blog to show up:

Terrible! Did he read the McFarlane stuff? Maybe he didn’t. This is only out 2 months after #7. Maybe he just got a summary. I guess I can give the benefit of the doubt. Meanwhile, the battle collapsed the shelter those homeless guys were in. Chris sees them, and doesn’t feel safe becoming Darkhawk again, but goes to help them as his regular self, which is pretty cool. Back at the fight, Spidey has gotten too much of a few pumpkin bombs and isn’t doing so good. Chris decides to change after all.

Hobby and Darkhawk mix it up for a few pages, with Hobby almost ripping the amulet off his chest, and then hurling a girder that DH dodges, but which then goes flying towards his house. He zooms off to try to stop it, and Hobby decides to take advantage of the distraction.

Sinners! So he does know about the religious thing, he’s just doing a terrible job with it. Gotcha. Somehow, this will continue into the next issue of Darkhawk, which I picked up on the same trip to McKay’s, so we’ll see how that goes. I mean, this was a pretty clean ending. Doesn’t really require an immediate rematch, nor a 2nd Spidey appearance in 2 months. But, I guess that’s the 90s for you.