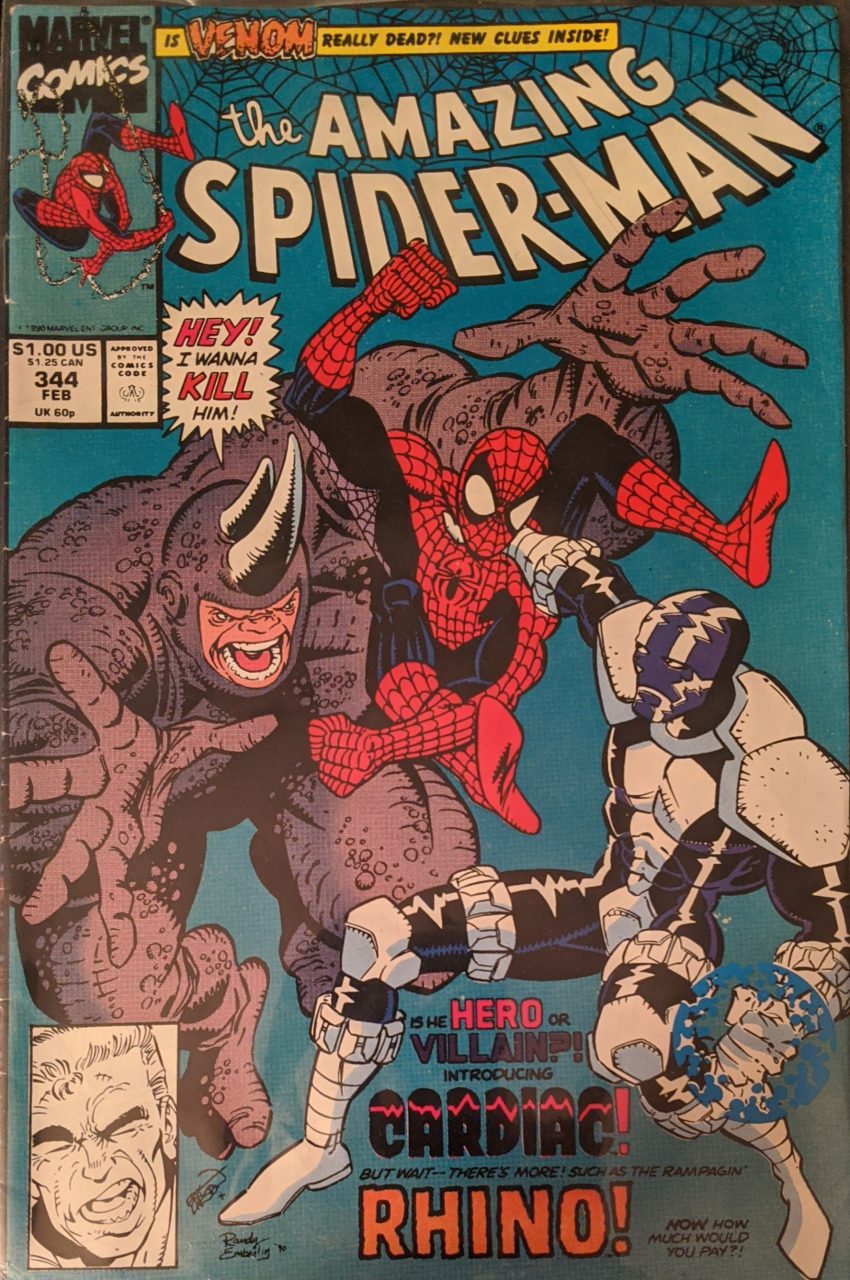 This one is unique for me in a very specific way. We’ll get to that later. Here’s the official debut of Cardiac. These characters designed by Erik Larsen stand out so much. There’s no mistaking them. There was this one story in Captain America where Superia was trying to get all supervillain ladies to join up into an army, and they put Larsen’s Femme Fatales in there, and they looked so weird in a sea of more traditional looking supervillains, with all their padding and piping and detail. Cardiac is really living up to the 90s stereotype of covering everyone in pouches. At any rate, let’s meet him. Spider-Man is in a warehouse, taking photos of chemical barrels. He thinks to himself and us that he & Joy Mercado are here on a story, and that these chemicals, “vital for processing cocaine, are being shipped to South America, and a legal loophole means nothing illegal is happening. But he’s getting pics, anyway, until his Spider Sense goes off.

Wait, why is lip synching at rock concerts… oh, if it’s the person on stage doing it. This is a Milli Vanilli reference! Timeless. Cardiac shoots a beam out of his stick that collapses the roof and flees. Spidey decides to do the same.

The whole “I’ve sworn not to take a life but I sure do kill some people” thing becomes central to Cardiac. Not unlike Venom’s tired “I hate killing innocents” speech he gives while killing innocents. The next morning, MJ’s out on one of her surprisingly common dawn location shoots when Peter stops by with fast food breakfast, not having been to sleep yet. They chat a bit and then she takes a nap. Meanwhile, Dr. Elias Wirtham, aka Cardiac, checks in with his secretary on his agenda for the day, which ends with a charity dinner. He cancels that while doubling his contribution, saying something’s come up.

This is hinting at something that never made sense to me about Cardiac, but we’ll get there. For now, we learn that the place Cardiac blew up last night was owned by Justin Hammer, who is informed of the damage and queues up a response in the form of The Rhino, who’s still on his payroll. We’re told Rhino’s “retro-design battle suit” is ready. I guess Larsen didn’t like McFarlane’s super 90s revamp. Justin Hammer, Iron Man foe, being such a frequent thorn in Spider-Man’s side at this time seemed odd to me as a kid, but I didn’t yet know one of Michelinie’s most famous credits is a beloved run on Iron Man. To me, he was the Spider-Man guy. THE Spider-Man guy. At school, Peter notices one of the chemicals he’s using is made by the company from last night, and decides he has to know what was going on in there. And then, we jump to 8pm at Ryker’s Island.

It’s the fateful first appearance of Cletus Kassady, the future Carnage. Spidey swings by Osborn to get to Sapirdyne, the place all this has revolved around. And Cardiac is arriving, too, transforming his cane into his weapon in the grand tradition of Thor and Daredevil. When he gets inside, he finds no guards or staff, and guesses something’s wrong just before Rhino smashes him into a wall.

Cardiac gets most of his power from his staff, and separated from it, he’s in trouble, so he runs for it, climbing a ladder and melting it behind him. But Rhino finds another way up into the rafters and is about to squash him when Spidey shows and kicks him off.

Larsen’s Rhino is too gangly, like Bagley’s will be. He should be built like a beer barrel. Whatever he looks like, he’s about to kill Spider-Man, but Cardiac returns the favor for the earlier save. With Spidey and Rhino down, Cardiac is free to blow up various chemical vats over Spider-Man’s objections.

More Hammer-funded villainy next issue. In the letter page, an off-hand comment seems to suggest they got Walt Simonson to ink the cover to ASM 337 because… the first issue of his famous, character-defining run on Thor was also 337? That’s weird, but ok, I guess.