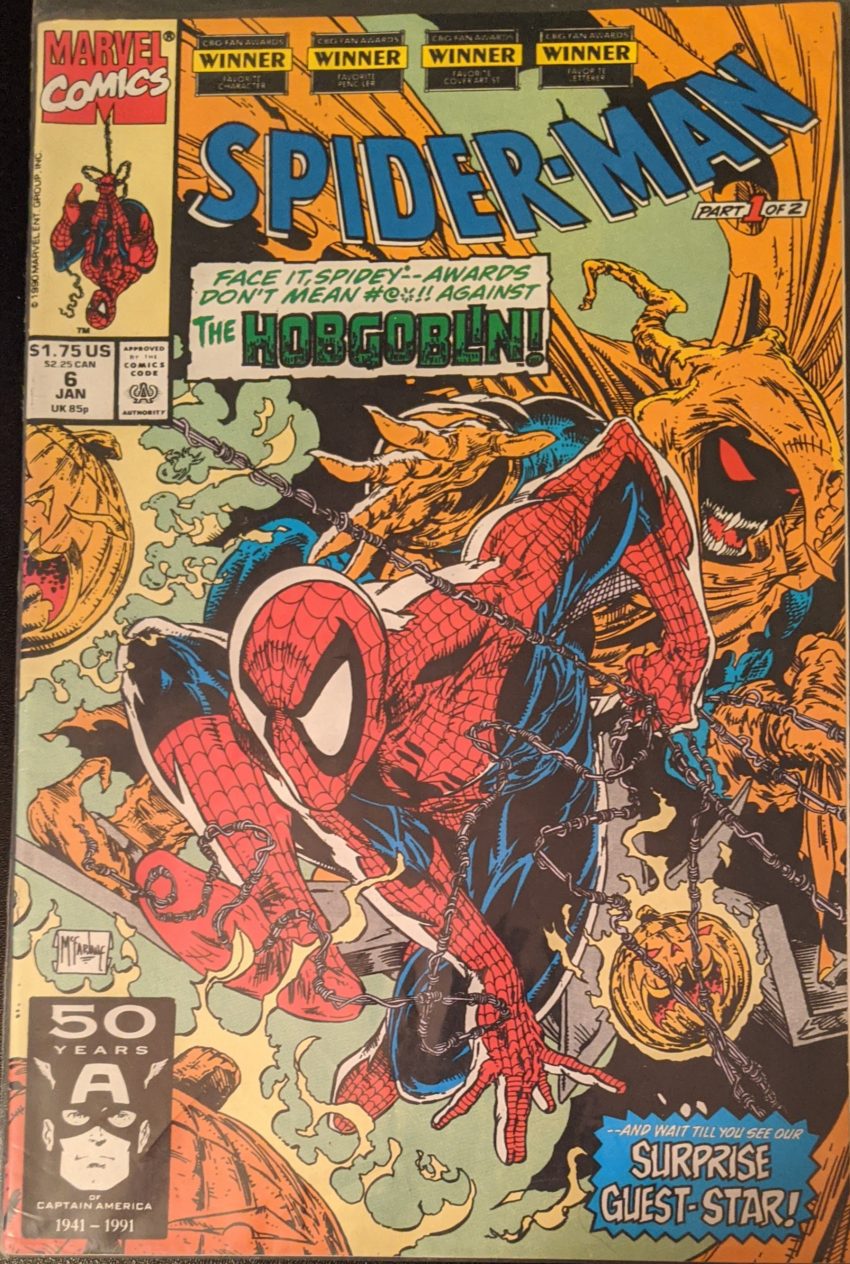 Time to get back to Todd McFarlane’s super dark Spider-Man. This story is darker than the last one, and the next one is darker than this. At least it’s only 2 issues. What he’s about to do to Hobgoblin is ridiculous. That difficult to read text at the top says this title won the Comics Buyer’s Guide awards for Favorite Character, Favorite Penciler, Favorite Cover Artist and Favorite Letterer (Shout out Rick Parker, the only letterer other than John Workman I’ve ever really taken note of). You’ll note one role is conspicuously absent. Look at the size of Spidey’s foot. Bigger than his head! What we can see of his torso just looks like a bag of meat or something. Hobby and Spider-Man don’t seem able to really occupy that space at the same time. They’re the same size, they must be right on top of each other. A really muddled cover to have the award for Favorite Cover Artist across the top. Also seems particularly weird to put the Batman logo on Hobby’s bombs. Ah, well. I remember this story pretty well, and it’s dreadful, so let’s get it over with. Gregory Wright coloring. I guess 4 titles a month was too much even for good ol’ Bob Sharen. At ANY rate…

In a 2-page spread, we see Hobgoblin, who, as you may recall, is a demon now, having removed his mask to reveal his creepy demon face beneath, and he doesn’t seem to know his real face is creepy. Forget anything we’ve seen before regarding this character, because Todd certainly has. He’s taken a bunch of people and strung them up in some unidentified weird goo all over a warehouse like he’s the aliens from Aliens, saying he removed them from the streets because of their lies, and if anyone else slips out in the world, he’ll deal with their blasphemy, too.

Sooooo this is what we’re doing. Hobgoblin is now some kind of Christian zealot who hears voices and whatnot and kills a kid’s mom in front of him. Yaaaaaay. We cut away to Peter & MJ sleeping peacefully for no reason, zooming in on the spider on his suit as a way to segue to our surprise guest star.

Yaaaaay. This is so what you want out of your Spider-Man comics! Oh, GR, we were just on a rollicking adventure together, and now look at us. GR hits the friggin child pornographer with his penance stare, and then just leaves him on the side of the road! Justice, indeed. At least another hero would’ve taken him to the cops or something. This is one time I’d be totally cool with Punisher murking somebody, but no, GR just leaves him to think about what he’s done. This is gonna be a tough slog. Elsewhere, almost halfway through this issue, Spider-Man starts doing something. What he’s doing is failing to sneak out of the house to go superheroing without waking MJ. Then he takes off.

Whatever. Hobgoblin takes his kidnapped child and blows up the warehouse full of his other victims, seemingly unaware that his bomb would kill them. I don’t really care, man, I’m already checked out on this one. Soon, cops are on the scene, letting us know 12 died and 15 lived, but all horribly disfigured, but they don’t know how many people were in there yet. Rather hilariously, Ghost Rider watches their investigation from an alley, somehow unnoticed despite his flaming head. And then we hit a page more momentous than it would at first seem.

“His past does not indicate any of this.” Weirdly phrased, but correct! It’s almost like this is wildly out of character! McFarlane nicked the idea of these TV talking heads from The Dark Knight Returns, and he will use them way, way, way too much in Spawn after this, but this is his first time doing it. Spider-Man webs up some coke head guy in an alley, saying he’s been told this guy can tell him where Hobgoblin is. Then he dumps his coke on the ground and leaves. Meanwhile, Ghost Ride beats up another guy looking for info on Hobgoblin. Speaking of whom, he’s babbling about sin and stuff to the child, who is now apparently fully indoctrinated into Hobby’s new way of thinking. And then, off panel, Spider-Man says, “Yeah, yeah, I’ve heard it all before.” Really? That’s your reaction to one of your enemies becoming a religious fanatic and kidnapper? “Yeah, yeah?”

If there’s one thing I always look for in my superhero adventures, it’s the disfiguring of a child. Such a fun time! Obviously, I am not enjoying this. I certainly didn’t as a kid, either. This was about as far from what I wanted from a Spider-Man comic as possible. And it was my hero doing it! What a betrayal! And he’s only warming up.