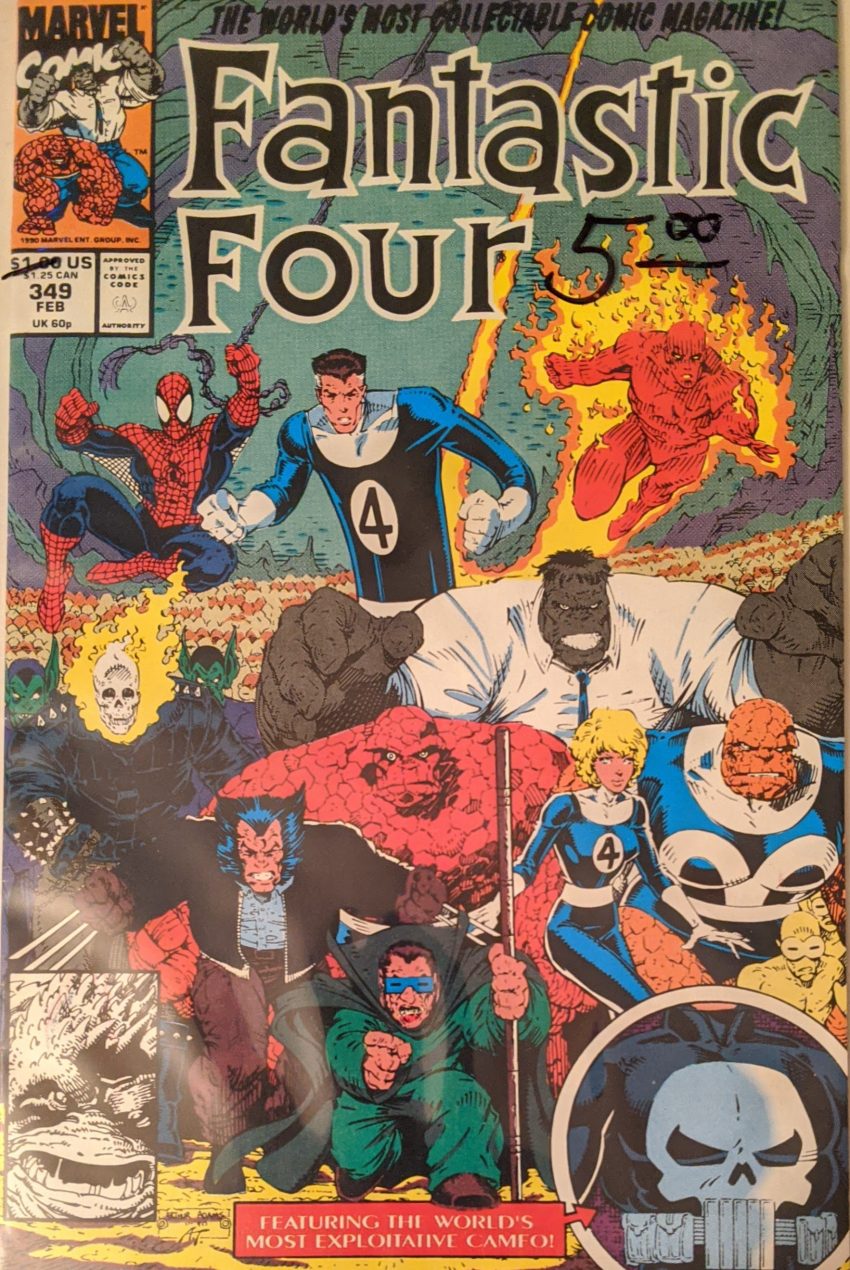 “The World’s Most Collectable Comic Magazine!” Part of the gag of these issues is this period was characterized by Marvel’s most popular characters constantly popping up in other people’s titles in an attempt to boost their sales (Especially Wolverine). And in this period, Marvel’s most popular solo characters would be Spider-Man, Wolverine, Punisher, Ghost Rider (If you can believe that) and Hulk, roughly in that order.. So getting most of them crammed into these issues kind of poked fun at that trend while providing a great example of it. And look, here comes Punisher now!  Gracine Tanaka is once again helping with pencils and Art Thibert only inks 3 pages before Al Milgrom takes over this month. Surrounded by an absolute ocean of The Mole Man’s subterranean Moloids, The Hulks about about to bulldoze De’lila.

Look at all those Moloids! Art Adams, man. And poor Reed is totally in De’lila’s clutches. Hulk chucks a big rock at them, barely missing, and then Spidey realizes that was the real Reed, so good thing. They figure out he must be totally enthralled, and The Mole Man says they’re headed into the deepest parts of his domain, where even he can’t control the monsters. So The New FF team up with the real FF’s oldest enemy to go stop Reed Richards. There’s an unusual hook for ya. They follow Spidey’s scanner, but a bomb left behind my De’lila causes a cave in, cutting The Mole Man and his guys off from the heroes and leaving Hulk holding up the ceiling, as he tends to have to do. And further down the tunnel, De’lila is tightening her grip on Reed.

Aw, Reed, no! Meanwhile, back at Four Freedoms Plaza, the rest of the gang has finally woken up and found out how trapped they are. They’re discussing Johnny burning through the ropes when Franklin calls the elevator and finds them.

Time for The FF to be a part of this FF story! Down in the Earth, some hieroglyphics lead Reed to think this cavern was created by ancient Deviants, and wonder if even Mole Man’s monsters are Deviants, when they find the one from FF #1 sitting on De’lila’s egg like a chicken. Reed distracts it away, and De’lila’s is nearing her goal when the heroes show up. She takes Reed hostage, threatening to blow up his head unless Hulk smashes into the big container holding the egg, which he reluctantly does. He knocks the egg loose for her, triggering various destruct mechanisms and defense systems that each hero present happens to be a solution for.

De’lila zaps Hulk with her gizmo, but all it does is burn up his shirt. Then Mole Man shows up with his endless army, having gotten the secret of the egg out of his captive Skrulls and wanting it for himself. And then…

Ben is still driving around in a robot Thing suit on missions at this time.

Then another big monster comes crashing in, the female’s mate, and it’s about to be really crazy, but in the chaos, everyone’s forgotten The Skrulls. Their leader explains (To no one in particular) that the thing in the egg is one of the Skrull Empress’s robot bodyguards. They imprint on the first living thing they see, which is always her, becoming unwavering defenders, and this one was stolen to become an assassin. The Skrull captain is about to blow up the entire cavern to keep that from happening.

The robot leaps onto the captain, quickly burrowing a deep hole in the earth so the bomb can blow up together safely away from everyone else. The mother, enraged, is ready to squash the Skrulls, but then robot emerges, having survived the blast. So why did the captain think it would stop it?

Spidey gets the last word in. But, wait, weren’t we promised a Punisher cameo?

There we go. And that’s the game! What a fun story. What a beautiful story! From here, Walt would return to writing and drawing to begin his final FF story, and after a fill-in by Danny Fingroth, Tom DeFalco would settle in for a very long, famously bad run on the title. Spidey names galore. As for “The New Fantastic Four,” like I said, they would be brought back together in one form or another several times over the years, as recently as 2020. It was such a wild concept that people couldn’t help returning to it. A New Fantastic Four thing was the project Mike Weiringo was working on when he sadly died far too young. I met Art Adams at New York Comic Con in 2016, and I can’t believe I didn’t bring these to get signed. I read these 3 issues a million times as a kid, along with 2 issues of X-Factor Art drew. I collected Marvel trading cards and was so excited every time I got one of the many he did. He may not have done a lot of comics, but I was a huge fan immediately.