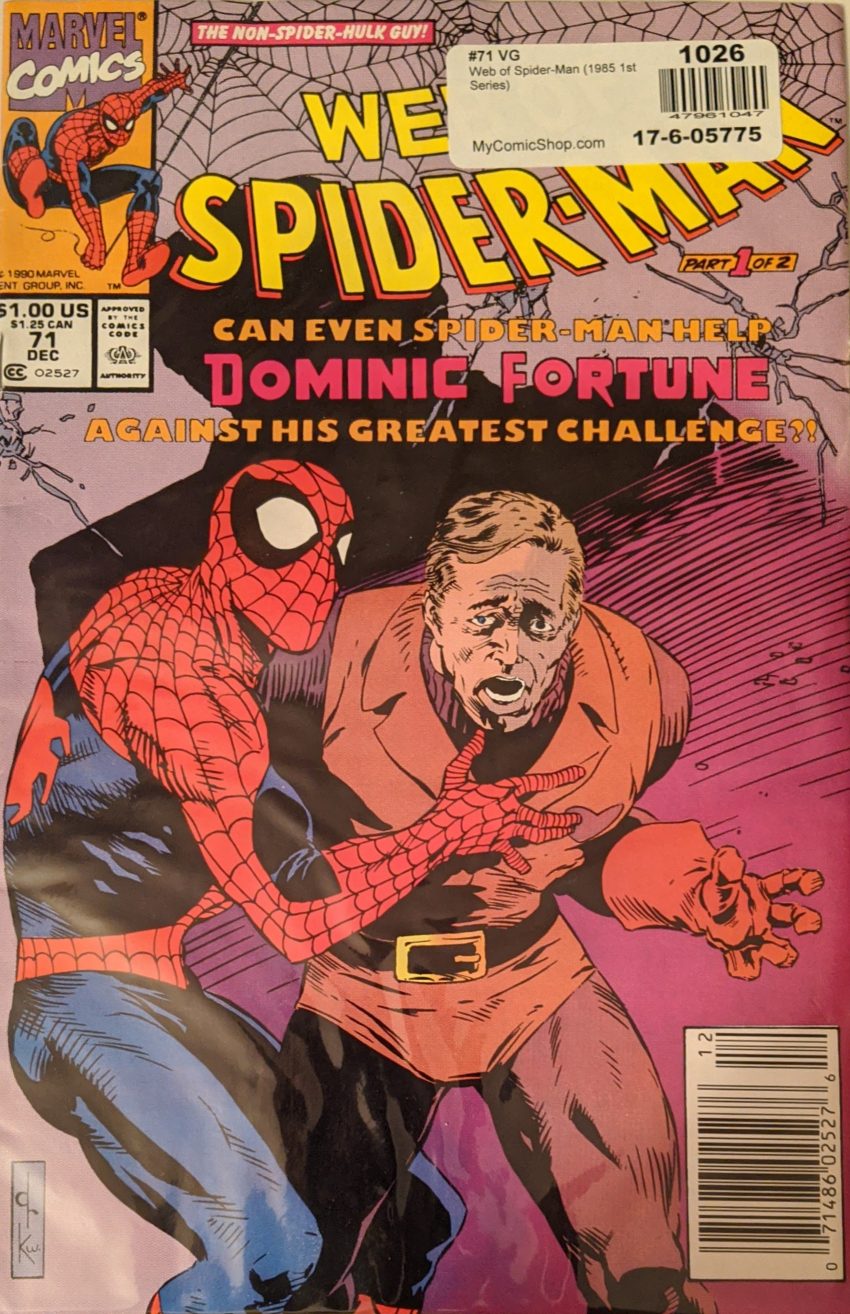 With this issue, Gerry Conway is officially off Web. He’s semi-done with Spectacular, too, but we’ll get to that. And, look, the return of both Dominic Fortune and artist Dave Hoover to this blog. Once and future Spider-Man group editor Danny Fingroth writes, Hoover draws, Keith Williams & Andy Mushynsky ink, and of course, Bob Sharen colors. The issue opens with a guy with a sniper rifle assassinating an old woman in her home. Mysterious narration says that leaves 2 more to be terminated, and then we find Peter Parker walking down the street, having just visited Aunt May, when his Spider Sense goes off.

Fortune says Peter could never know what it’s like to have a loved one die due to his own negligence as he takes off. You know. Soon Spider-Man is hopping around town recapping his origin.

Oh, ok. I assumed his son died a long time ago, but I guess not. Also: Sabbath? Way back in MTU 120, we learned that Dominic Fortune’s one, true love was named Sabbath, and he was heading off to see if she was still alive. This probably isn’t what he envisioned. Steele says there’s one more witness and Fortune who have to be eliminated. While Steele & Sabbath plan to tie up his loose ends and retire to South America, Peter Parker reads up on Dom & Sabbath’s adventures in The Daily Bugle’s archives.

Peter’s disembodied eyes are a weird choice up there!

“While the rest o’ them dudes was makin’ their bread, boy I beg your pardon, I was losin’ mine!”

What a lucky coincidence! Spider-Man jumps into heavily Ditko-influenced action, but those goons were just the beginning. A small army of goons rushes the house, but before Spidey can move, Silver Sable & her Wild Pack burst from the house to take care of them.

Spidey dives into that guy before he can fire, and then bends the barrel of the tank’s cannon to keep it that way as Sable & her guys do their thing. Inside, they find Fortune alive. Sable says she wants Steele to stand trial and possibly give up other Nazis she can hunt, but Dom is adamant about killing him. Then some of Dom’s guys get an address for  Steele out of one of his henchmen, and Dom uses a smoke bomb to make a run for it. They escape through a hidden staircase down to a car, but Spidey gets a tracer on it. Soon, Fortune and his guys are invading the address they got, and after a lot of shooting…

After shooting a gun out of the young Sabbath’s hand, Dominic Fortune is about to kill his nemesis when Sable, Spidey & the rest run in.

That can’t be good! Will everyone live? I mean, probably! Meanwhile, in the letter page, it’s chaos! Fans have by now seen those wacky letters from “Fish” in WEB 65, and one Aaron “Mr. Hate” Sims did not like it. We join his letter already in progress…

But wait, Fish is back!

What is going on, seriously? This is kind of hilarious. Highly unusual for a comics letter column! They also go on to say Gerry Conway stepped away from Web due to his duties as story editor on TV’s Father Dowling Mysteries (Really!). They say he’ll be back with issue 76. He will not. Salicrup explains that Danny does this issue and the next, John Byrne will write the beginning of a 3 part story, and Tony Isabella will write the other 2 parts (Why?). Instead, that story will be 4 parts, and Conway will not return. That’s comics sometimes. Anyway. We’ll see how Spidey & The Gang survive being blown up next time.