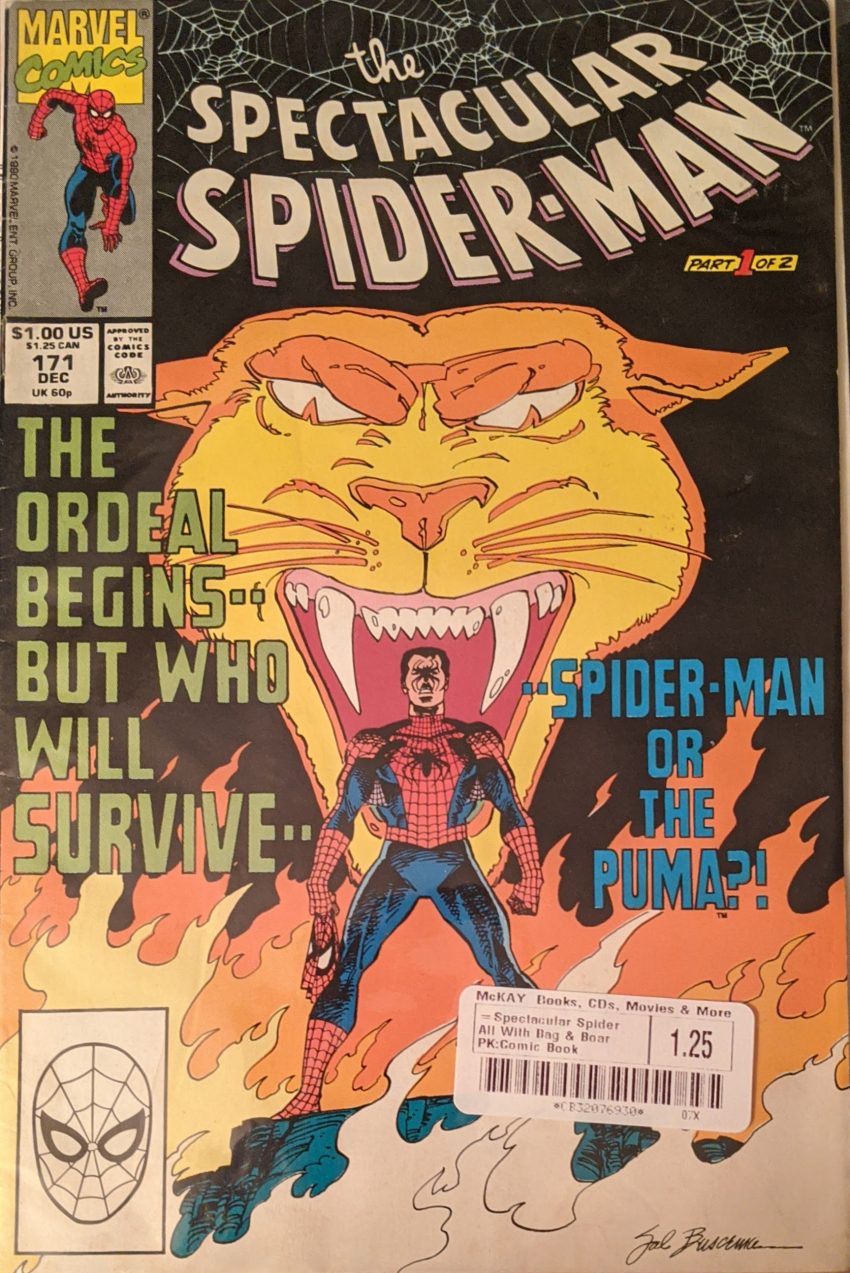 They say “The ordeal begins!” like we would know what that means. Time to finally wrap up this long-suffering subplot about Puma’s debt to Spider-Man. I assume Puma will kill Spider-Man. As we begin, Peter Parker and Thomas Fireheart are in New Mexico, among Fireheart’s tribe, in a sweat lodge, with their animal totems painted on their faces. Uh-oh. This can’t possibly proceed as an accurate approximation of the real thing. I mean, I’m not an expert on the traditions of the indiginous people of the Americas, but I am pretty well trained on old comics, and you know… not a good history. Has any character from the Native Peoples ever not been racist? I’m trying to think of one. Wyatt Wingfoot is relatively ok, I guess (Shout out to Jack Kirby for generally doing better by characters who aren’t white than almost anyone of his era). Wikipedia says of the practice of sweat lodges, “In all cases, the sweat is intended as a religious ceremony – it is for prayer and healing, and the ceremony is only to be led by elders who know the associated language, songs, traditions, and safety protocols.” Strap in, gang, this is certainly not gonna be that. An elder gives Peter something to drink and he has a vision of how he got here. That’s hilarious. “My ‘spirit journey’ or whatever is a flashback for the benefit of the reader.” Spider-Man went to see Fireheart at The Bugle…

Why must that man’s name keep coming up? And why does Spidey have 2 left hands as he grabs Thomas’ shoulder?

So Fireheart drinks the stuff and flashes back to… meeting with J. Jonah Jameson, recapping how he bought a controlling share in The Bugle, and saying he has an offer JJJ couldn’t refuse.

What’s going on here? How does this satisfy their “debt of honor?” Somebody’s gotta die? Peter hallucinates MJ in the smoke, and then flashes back to talking to her last night, as she acted very worried about his trip. But she wasn’t worried about him, She was worried about this stupid infidelity subplot, and what might happen when he’s not around. Blah. Back in the sweat lodge, Fireheart transforms into The Puma as Peter’s narration recaps his whole deal for us before flashing back to their arrival in New Mexico…

Alright, I guess. Back in the present, Peter begins to hallucinate that he’s turned into a giant spider with his head, in the middle of a web with his entire supporting cast in it, struggling with whether or not he’s a monster. Then Fireheart’s uncle tells him every man has a monster inside him, and must decide which he wants to be, before the 2 superdudes’ animal avatars rise out of the smoke.

They each physically battle the other’s animal and defeat it, but then they reform and fight each other, slowly merging into a black mass.

Aaaalright. If honor demands blood, what exactly have you been doing for the last few years of comics? Why constantly help Spider-Man if honor demands blood? Maybe we’ll find out next issue. I guess you could do a lot worse for Native representation than this issue. At least they didn’t fight in the actual sweat lodge.