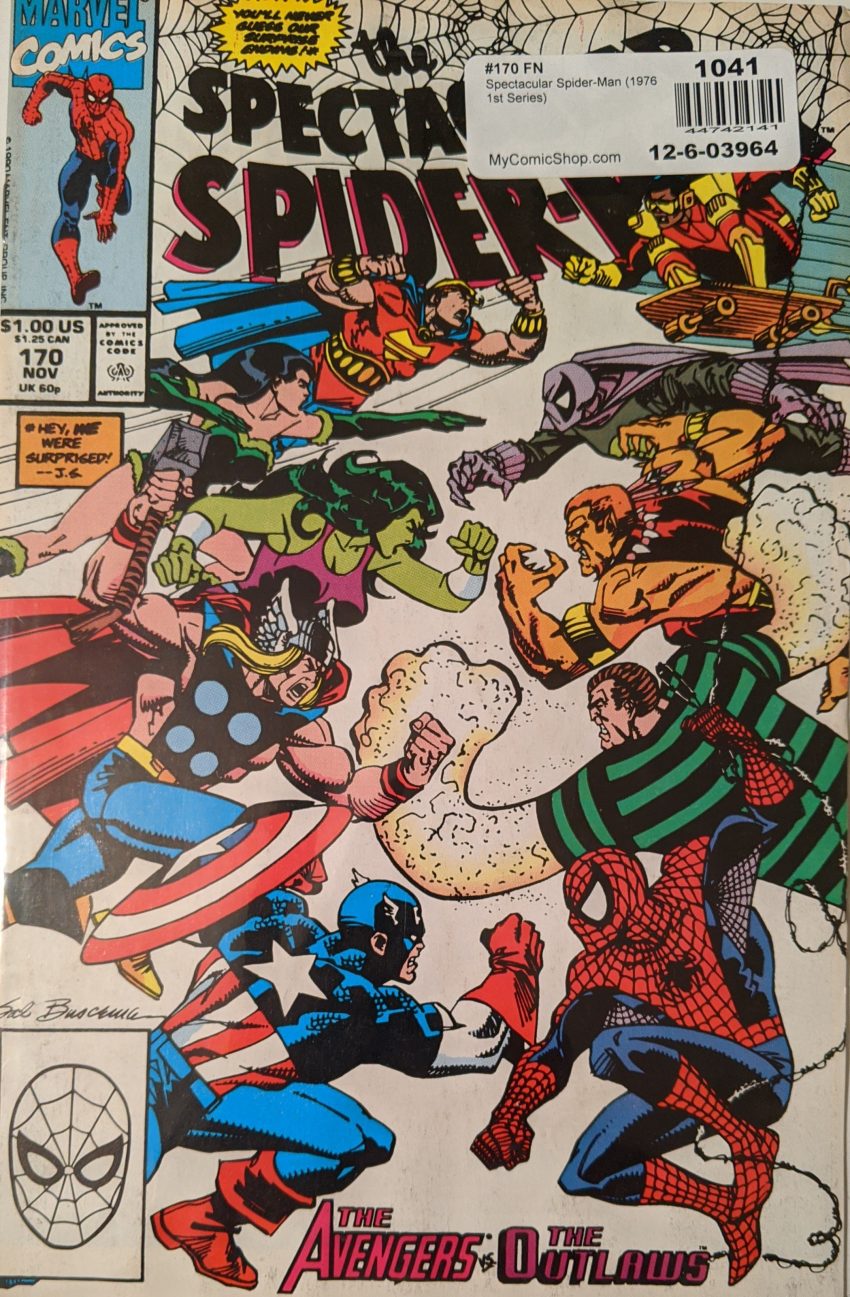 Wherever the other 2 issues of this story came from, no question about this one. Anyway, time to wrap this up, as the Avengers’ Quinjet lands near Spider-Man and his Outlaws. He tells them to try to be nice.

The Spider Phantom’s dialogue at the top of the 2nd page doesn’t make much sense to me. I guess he’s implying Cap is “desecrating Old Glory” by wearing it, and therefore attacking him is ok? I dunno. Anyway, time for Way More Than Two Heroes Fight Over A Misunderstanding. As battle is joined, Spider-Man hops out of sight, turns into The Space Phantom, and then brings back the very confused real Spider-Man. The most fitting Avenger gets to him first.

Fight over! The whole gang takes Space Phantom back to Avengers Mansion, held safely in check by Quasar’s Quantum Bands. Space Phantom explains that, while he still technically goons for the time travelling Avengers villain Immortus, he’s not been called to do anything in a long time, and he was bored, when this mysterious guy appeared, and told him he could free The Space Phantom from limbo if he’d do all the stuff he did in the first part of this story. Then he recaps the rest of the story, and suggests The Avengers, The Outlaws and he all team up to stop “The Master.” Everyone declines. Cap suggests they finish talking in their conference room.

Ok, whatever, stand by for the exposition:

Ok! So… whatever that was. Soon, everyone’s in the Quinjet flying over Manhattan, Puma leading them to the cloud that looks more like liquid with his super senses. And when they find it, it smashes through the ship, forcing everyone to bail out over The Hudson River. Spidey barely saves the unconscious Puma before joining everyone else near the Intrepid Aircraft Carrier Museum. As they all regroup, the big inky thing turns into a humanoid form and charges toward them.

Still seems weird that the mastermind would be trying to help somehow. As the thing wrecks various Avengers, Spidey swings over to Cap.

So everyone starts attacking the thing to no effect except Spidey and She-Hulk. But this time, they’re leading it toward Sandman, who manages to contain it within his sand form for a few minutes. Just long enough for Spider-Man & She-Hulk to arrive with the cask it was sealed in to start with. Then Spidey punches a hole in Sandman.

Well… ok. I guess that does make sense of it all. But… not in a very satisfying way, I must say. This random dude Spidey encountered for like 5 seconds while in the midst of the giant pile of insanity that was TAC Annual 8 must’ve somehow made quite the impression. And why in the world couldn’t he get involved? And even if he couldn’t, why not just put the bug in one of the heroes’ ear to go investigate the site? Pretty convoluted. But at least it did all make sense, in the end.