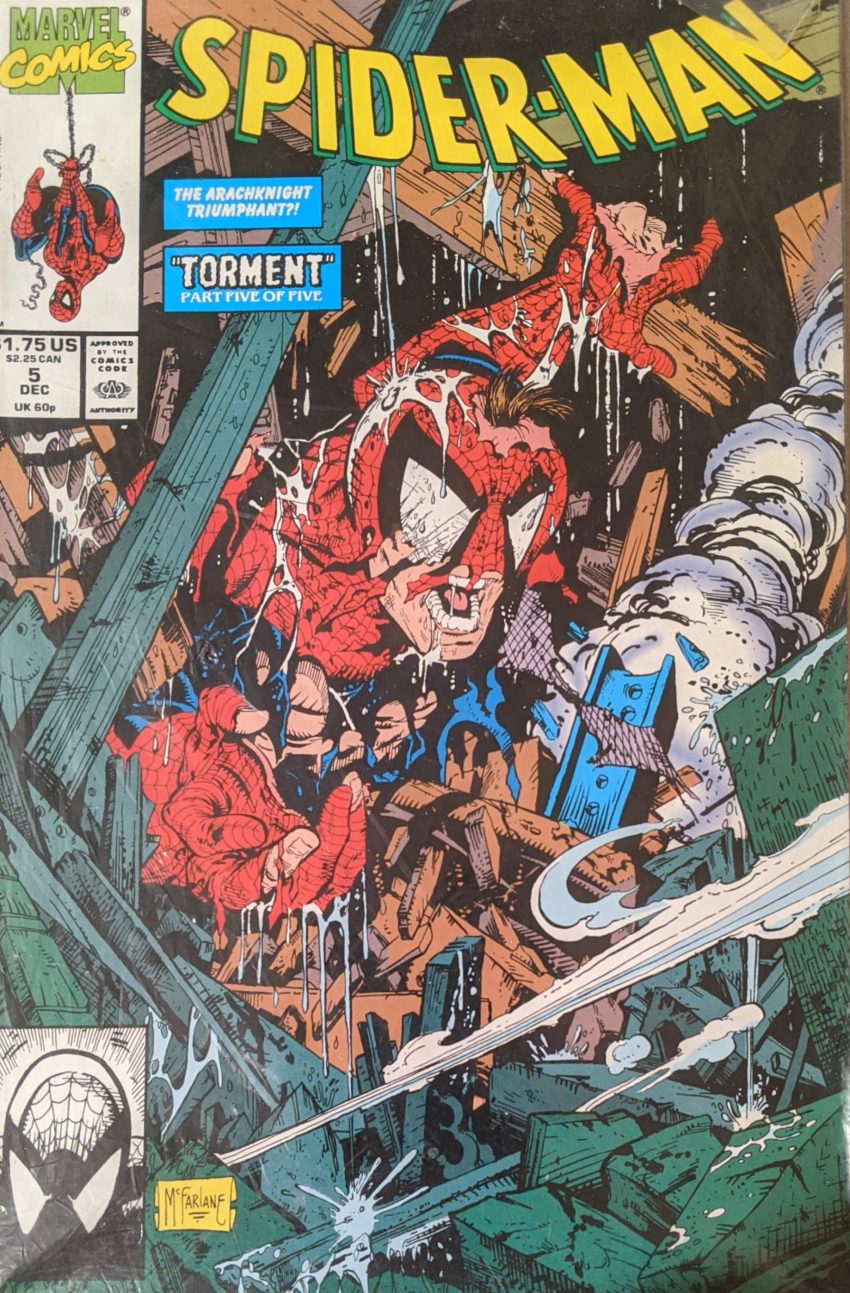 One more time for The Arachknight. Gregory Wright tags in on colors this month, so things look professional again. Page one is cops being alerted to a huge explosion and fire, letting us know it’s 2:54am. The 2-page “–rise above it all” spread is Spider-Man in the battered rafters of the place, begging in his internal monologue as he often has for someone to tell him why all this has been happening. I dunno, man, if you’re gonna do this vague and largely pointless torture story, maybe don’t put a button on how what’s happening and why hasn’t been explained to either us or the hero. Spidey fills another page wondering what’s going on, cut to MJ headed home for a 2nd time, cut to Spidey recapping last issue for some reason? I mean, that’s standard procedure in comics of this vintage, but McFarlane hasn’t bothered to do it until now. Strange choices. He thinks he has no idea who this woman is, and I guess that checks out. His interactions with her in previous appearances were minimal, at best, and a long time ago. He never would’ve heard her name.

Lizard lookin’ weird! MJ’s taxi home almost gets hit by a cop speeding to the scene, Calypso stands around in her trance or whatever, it’s basically the same scene she’s been in every time we’ve seen her for 5 issues, except now surrounded by fire. So little has actually happened in the last 5 issues! Spidey’s dripping sweat gets The Lizard’s attention for at least the 3rd time in 3 issues.

The Lizard has pushed Spidey’s head into debris just like that before, and we’ve seen his gaping maw inches from Spidey’s head like this like a dozen times. And after another pointless cut away to MJ in her cab, Calypso stops The Lizard from eating Spider-Man for the umpteenth time. It’s just the same thing over and over and over for 5 issues! She says the poison should have killed him by now, and “it is time to speed up the process.” Why not just let your monster kill him, then, dumby??? What is even happening?

So did he “kill” The Lizard on purpose? Is that what we’re supposed to think? Last issue, trying to decide how to get out of this, he thought he’s already learned he can’t kill The Lizard. Did he want to? Who knows? Todd doesn’t care. Spidey is trying to figure out what to do with Calypso when the cops arrive. Deciding she can kill Spider-Man anytime (Via internal monologue! Perish the thought of having the villain speak to the hero during this, the end of their 5-issue battle!), Calypso magically causes the remaining structure to collapse in on her.

Bluh. As I said before, it’s really not fair for this to be McFarlane’s first writing gig, but even so, where oh where was Jim Salicrup? Instead of filling the letter pages with snarky asides, maybe he could’ve coached Todd on basic storytelling. I mean, we don’t even see Spidey and MJ reunited. Her entire “story,” if you can call it that, during these 5-issues is wanting to see Peter and hoping he’s safe. He finally comes home and we don’t even see them together? What about Lizard sort of scrawling his name on the walls in the beginning? Was that Curt trying to fight the mind control? Shouldn’t something have come of that? Could Salicrup not have kindly suggested that something actually happen during this story? That repeating the same 3 scenes over and over for 4 issues is not a story? That Calypso AT LEAST TELL THE HERO WHO SHE IS? I get it. The last page kind of explains what the story was supposed to be about (Not the last time I would see McFarlane end a story and then say, “This is what I was trying to say”) It’s about how sometimes a hero will be attacked seemingly at random, about how things don’t always make sense. Sure, sure, super deep. But Todd McFarlane is no David Lynch. This is not how you do “things don’t have to make sense.” This is kind of the blueprint for Spawn. While I was stupid enough to keep buying it, every Spawn story was “Spawn is minding his own business, doing nothing of interest, when a villain attacks him, beats him up, and gets defeated for little to no reason. Then Spawn goes back to doing nothing.” That was the plot of Spawn for… and I am deeply embarrassed to admit I bought this many before wising up… over 100 issues! Regardless of quality, the rest of Todd’s (10) issues of this book will at least have something of a plot. It does get… slightly better. Only slightly. And wait’ll you see the nonsense he has brewing for The Hobgoblin. Whew. Still better than Tom Lyle’s Spider-Man Unlimiteds, though, I must say. Next post, we’ll get back to comics written by professionals.