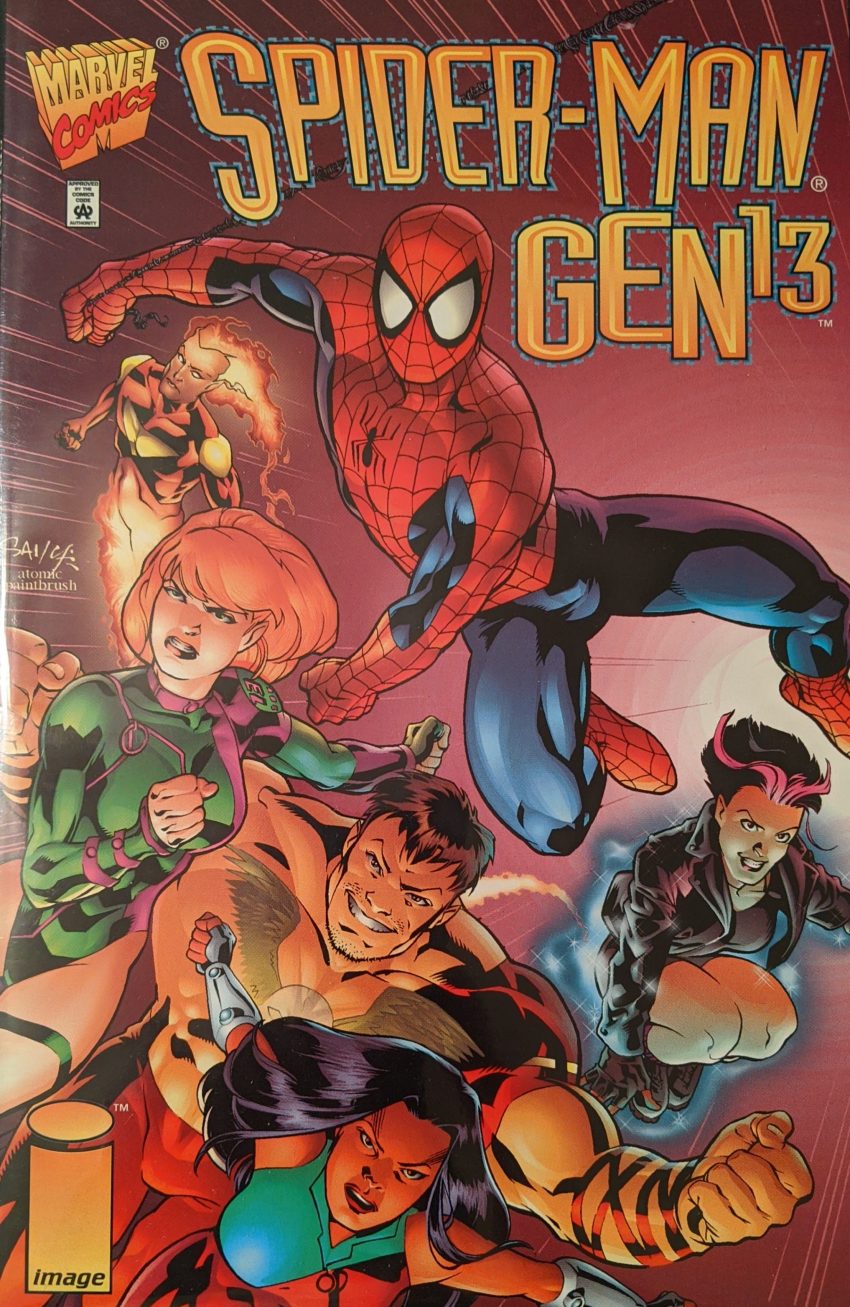 We wrap this block up with this, another non-canon crossover with Jim Lee’s Wildstorm Universe at Image. Gen13 is a team of teen heroes. They’re more or less mutants, with familiar powers. Fairchild’s powers include super strength and being allergic to pants. Burnout is just The Human Torch (In powers, personality and even color scheme). Rainmaker controls the weather. I wanna say Roxy’s power is gravity manipulation?…and that if she has a supername, I don’t think I ever saw it in print? And Grunge does whatever Grunge does. I own a handful of Gen13 comics and other comics with them in them, and I literally never figured out what Grunge’s power is supposed to be. A lot of Lee’s mythology revolved around Team 7, a special ops team that got super powers on a mission that went bad in the 70s. Backlash, the previous Wildstorm character who met Spider-Man, was one of them, and some of Gen13 are the kids of his teammates. They’re led by another former Team 7 member called Lynch. Anyway, Gen13 was a massive hit, launching the career of the oft-imitated J. Scott Campbell (And as it is very much a product of the art-crazed 90s, I suspect many fans couldn’t even tell you who wrote it, but it was Brandon Choi). Campbell’s aggressively oversexualized art of teenage girls, emblematic of the period, sold a lot of comics to sad and lonely dudes. But the Gen13 creative team is nowhere to be found here. This is written by seasoned Spidey scribe Peter David. And it’s drawn by Stuart Immonen, a future Spider-Man MVP, working for years on Ultimate Spider-Man, a chunk of the time Spider-Man was an Avenger, and a later stint on ASM. He’s still a relative newcomer here, tho, and hasn’t developed the lavish and highly energetic style that would make him one of the most copied artists of the 2010s. But he’s already plenty good by this point! Inks are courtesy of Cam Smith & Andrew Pepoy and colors are by Joe Rosas. The book opens with Spider-Man being beat up at a rock concert. The band “Black Lung Disease” is playing, and Gen13 is in the audience.

Spidey is getting whupped up in the rafters by a woman who kinda looks like Black Widow in a cape and doesn’t speak. She hit him with his true arch enemy, gas, before the issue started, so he’s disoriented and doing poorly when she kicks him right off the catwalk toward the crowd below… and into Roxy’s waiting arms as she sees him coming and slows his fall.

Spidey immediately takes off, and the kids try to follow, but some creepy and crappy security won’t let them follow back stage. Fairchild, their level headed leader, tells the gang to forget it, but then one of the security goons slaps her butt, so she hefts him off her feet with one hand and the kids go where they will. But Spidey’s already gone, and recapping that The Bugle sent him out on tour with this band (Rather preposterous!) which is why he’s in Gen13’s home turf of California, and when he was headed to the gig, he was ambushed by the lady, who called him “a means to an end.” He mentions how whatever she did to him knocked out his Spider Sense in addition leaving him really disoriented as he catches tp the present in time to be shot at by cops and fall to the floor.

Shooting with no warning sounds like cops to me, Spidey. Oh, hey, Grunge is apparently bulletproof. Is Fairchild bulletproof, or just strong? I know very little, their comics tended to focus more on gratuitous butt shots than actual stories. Fairchild tackles one of the cops and inadvertently ends up on stage, where her teammates yell at her to stay there and be a distraction. Meanwhile, Spider-Man passes out, and the kids overrule Rainmaker’s objections to take him back to their secret base. The objections continue as they get home.

Burnout has a thing for Rainmaker, who is a lesbian (And if you think that was handled with class and taste in crappy mid-90s teen book, brother, have I got bad news for you), but I guess not above manipulating him. Then Lynch, the old guy who’s their Professor X, comes downstairs ton conveniently announce he’s going out of town. Roxy holds Spider-Man up on the ceiling so Lynch won’t see him, and that even works, somehow. Then it briefly reminds us it’s a Gen13 comic, even tho Immonen is far classier than the usual artists on said property.

Gen13: Fairchild’s clothes ripped off or your money back. We cut to the following morning, and the surprising realization that the lady who tried to kill Spidey last night has a young daughter who’s late for school.

Ok! Back at the spot. Spider-Man wakes up and gets in a fight with the team’s human looking android maid, who apparently wasn’t informed he’s here. As he comes bounding through the kitchen, Burnout sets his web pack on fire for some reason (?), forcing a dive into the pool.

This book is squarebound and impossible to photograph. Meanwhile, that lady is in country at a custody battle over her daughter with her husband. Then she gets a message in an earpiece from those dudes in that van and seems to become disoriented. Her lawyer asks if she’s ok, calling her Heather, to which she answers, “Guess again.”

This is a lot of detail for a character I assume won’t appear in anything ever again. I guess she might’ve come back in Gen13, I dunno. Back at their place, they’ve just finished explaining their deal to Spider-Man (I wish they’d told me!), who says he thinks he’s 100% now. They start talking about how they’ve looked up to him since they were kids and he gets very uncomfortable about the idea of being old. As he makes his exit, he tells Rainmaker he feels weird about being looked up to by Gen Xers.

Cut to Glider’s lawyer, on the phone with a client, expositing that she was hired by the dad of a guy who was a guard at I/O, the secret intelligence agency the kids escaped from. Lynch used to be the Nick Fury of that until he went on the run with the kids. The guard lost his job and is now among the goons with Glider getting payback from the kids. Sure, ok. Back at the house, Fairchild had just found Glider in their database when the goons smash into the house. Rainmaker blows most of them out a window.

Fight fight fight, the goons bring down Burnout but are being made super heavy by Roxy when Glider attacks her, Spidey attacks Glider, you know, super hero stuff. The faceless goon responsible for all this is about to shoot roxy when Grunge saves her. Maybe he can gain the properties of things he touches like Absorbing Man? He looks like concrete. I really don’t know what he does.

The inker on the back halfo f this book is really phoning it in, my goodness. Well, you won’t believe it, but the fight happens to spread to a nearby school yard, and GUESS WHOSE CHILD IS THERE?

Glider tells the goon not to threaten the kids, and he doesn’t listen, so she vanishes and reappears with one of the goon’s gun, mowing down all the bad guys to Spider-Man’s horror.

The next day, Lunch comes home to show the kids a Daily Bugle with them on the cover with Spider-Man, destroying their hopes of keeping everything a secret. How… has that been published already? I guess. Peter maybe coulda emailed them photos in ‘96, but they wouldn’t have been very good. And he’s flying home right now, thinking he only submitted a photo where you can see Gen13 or Glider’s faces. He wonders what happened to her.

Ooooohkay. What an odd book. I obviously didn’t remember it at all. Certainly haven’t picked it up since it came out. The core of the story being some random bad guy is very strange. But I guess that’s comics. In spite of starring the real Spider-Man, this was published the month before Peter returned to the tights in Spider-Man 75. Why? Who knows? It’s the 2nd book starring Peter to be released during the time Ben was Spider-Man, but I’m saving the other one for a later block where it’ll make more sense. And that’s it for 1996 for awhile. Next post, we jump back to 1990, for the debut of Adjectiveless Spider-Man.