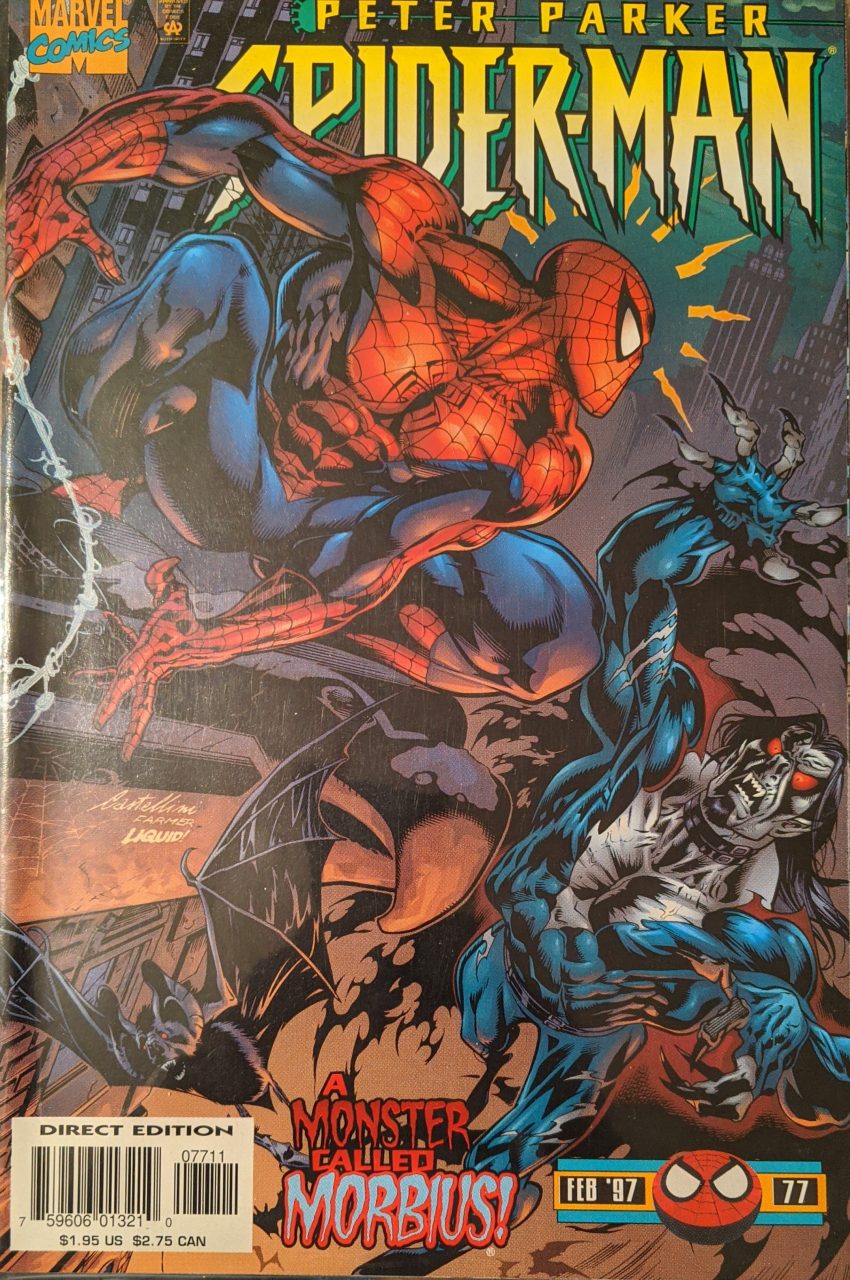 Morbius! And rendered by Claudio Castellini, no less! Last seen ‘round these parts in Marvel Vs. DC, he’s the guest penciler this month as JRJR takes a rare break. Castellini’s art fascinated me in that it seemed classic and modern at the same time. He didn’t do many comics for the American market, so this is cool. He’s inked by Cam Smith, Bud La Rosa, Harry Candelario & Ralph Cabrera and joins the rest of the usual team. This issue continues from X-Man #24. Yeah, they apparently returned the guest appearance immediately. I don’t have that issue, and I don’t think I care to, so we’re just gonna pick it up as we go.. We begin the day after Christmas, as an awful man on the ESU campus thinks about how he wants to get drunk and shoot people to get revenge for his wife nagging him all the time. Lucky for society, he’s in for a shock.

Earlier in the darkness-crazed 90s, even Morbius got turned into an anti-hero, packaged with a bunch of other spooky guys as “The Spirits of Vengeance.” He got more goth then, and still is here. Elsewhere on campus, Spider-Man is already in pursuit of Morbius, but not having much  luck.

It’s a lot shorter than Skroce’s, but Castellini’s “Spidey in action” panel is just as good.

These pages feel sort of Romita Sr-y, but also totally not. It’s very interesting to me. Things get worse for Peter as Arthur Stacy shows up, having been contracted by the school to investigate the murder Morbius is responsible for, and before Peter knows it, he & MJ are committed to dinner with The Stacys against his wishes. Meanwhile, in an attic on campus, Morbius rehashes his deal. And in spite of being in comics for over 20 years, by this point, even he thinks everything you could want to know about him happened in ASM 101.  Not a deep character.

Betty Brant has shown up out of nowhere. PEter takes her for a cup of coffee, having run off MJ. She talks about how hectic her career is, but he can tell she’s got something more serious on her mind. She begins to talk about Flash when some of the anti-mutant bigots The Friends of Humanity make a fuss in the coffee shop before being kicked out by the owner.

Oof. As Peter darts out of the restaurant, the bigots are still outside, and want to fight him for saying mean things to them earlier. He makes them crash into each other and bolts. Soon, Spider-Man is on the hunt for Morbius, and the bigots will have to wait for another time.

Ok, this is weird.

That lady is dressed exactly like MJ was earlier. Either the whole art team got confused, or Mackie decided to change the story once the art came in. Spidey webs up Morbius, who is obviously trying to say he thinks this Dr. Janson can help him, but Spidey won’t hear it. So, as Spidey covers the lady who may or may not be MJ’s escape, Morbius grabs him and sucks some of his blood! In all their confrontations, he’s never actually pulled that off before.

Uh-oh! We’ll see how this plays out next post.