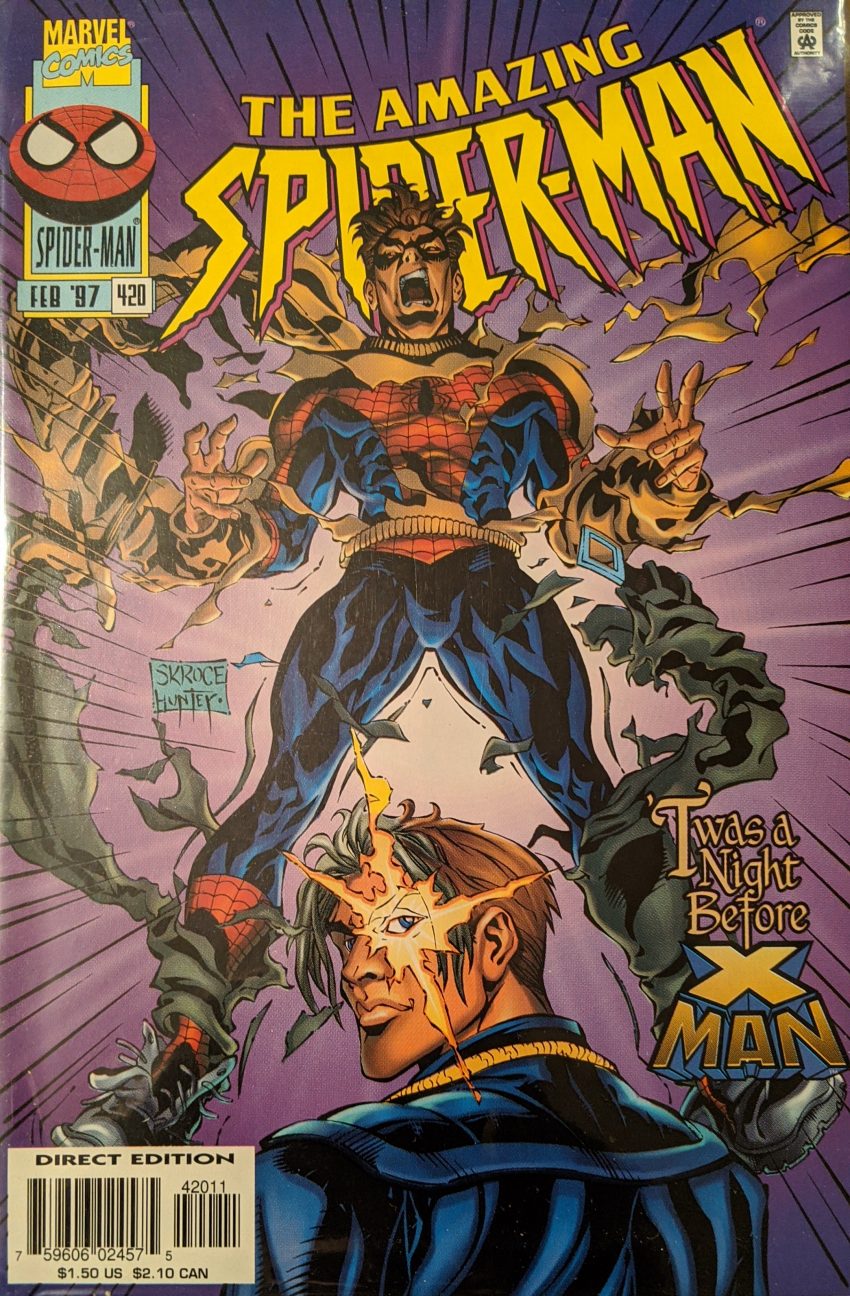 Steve Skroce made his name on X-Man, a comic about a young Cable from an alternate reality hanging out on the prime Marvel Earth, so I guess they felt this needed to happen. This one opens with Ben Urich trying to get some info out of the cops about “El Uno” from the previous issue of ASM when El Uno escapes. A cop threatens to pistol whip Ben for no reason, which checks out, as they survey the hole in the wall caused by El Uno’s escape.

Ok, whatever. He got blown up, how does that translate into being covered in goofy cartoon bandaids? Elsewhere, Peter Parker is window shopping for some boots he wants to buy MJ for X-Mas, but can’t afford. He thinks about how they deserve some happiness after the last year, a feeling compounded by seeing a happy couple playing with their baby. Then The Bugle hits his pager, so he hopes his luck is changing. I don’t feel like this page is important, but it’s got a 1-2 punch of visual ridiculousness too weird not to document:

That outfit! That impossibly huge punching bag! But, you know, not plot important, overall.

Two Heroes Fight Over a Misunderstanding denied! Or maybe just postponed. In Argentina, The Black Tarantula’s lil minion guy is decorating a giant Christmas tree, which very much upsets his boss, but not much else happens in the scene, so we’re back to NY. X-Man, ne Nate Grey, uses his telepathy to make his followers forget him & Peter, then flies them to a nearby rooftop.

Clothes cost money, Nate! He’s from the Age of Apocalypse universe, where Professor X was accidentally assassinated by his own time traveling son way before forming The X-Men, which directly lead to Apocalypse becoming ruler of North America and all kinds of evil and such. Here in our world, he’s not got the most tact. We cut to some homeless guys getting taken in by the cops for being naked because El Uno stole their clothes (Why did he steal two guys’ whole outfits?), and to El Uno stalking Delilah.

Nate shows Peter his own past, his own losses, and then Peter invites him along on some errands. Nate keeps reading his mind and Peter keeps telling him not to, and then El Uno finally catches up to Delilah.

Quam, y’all! As the two bad guys have a knock down, drag out battle across town, Peter Parker buys MJ’s boots with his newly acquired photo money.

That’s nice. Delilah gets the better of El Uno and catches him in an explosion.

Weeeeeird thing to do, but in a nice way, I suppose. Making these two best buddies instantly is very bizarre and, as you might expect, not going to last. And now Peter is kind of mentoring 2 young heroes. Strange choices all around. The issue wraps with Black Tarantula receiving El Uno’s head in a box for Christmas, courtesy of The Rose. Nothing good can come of that for our hero.