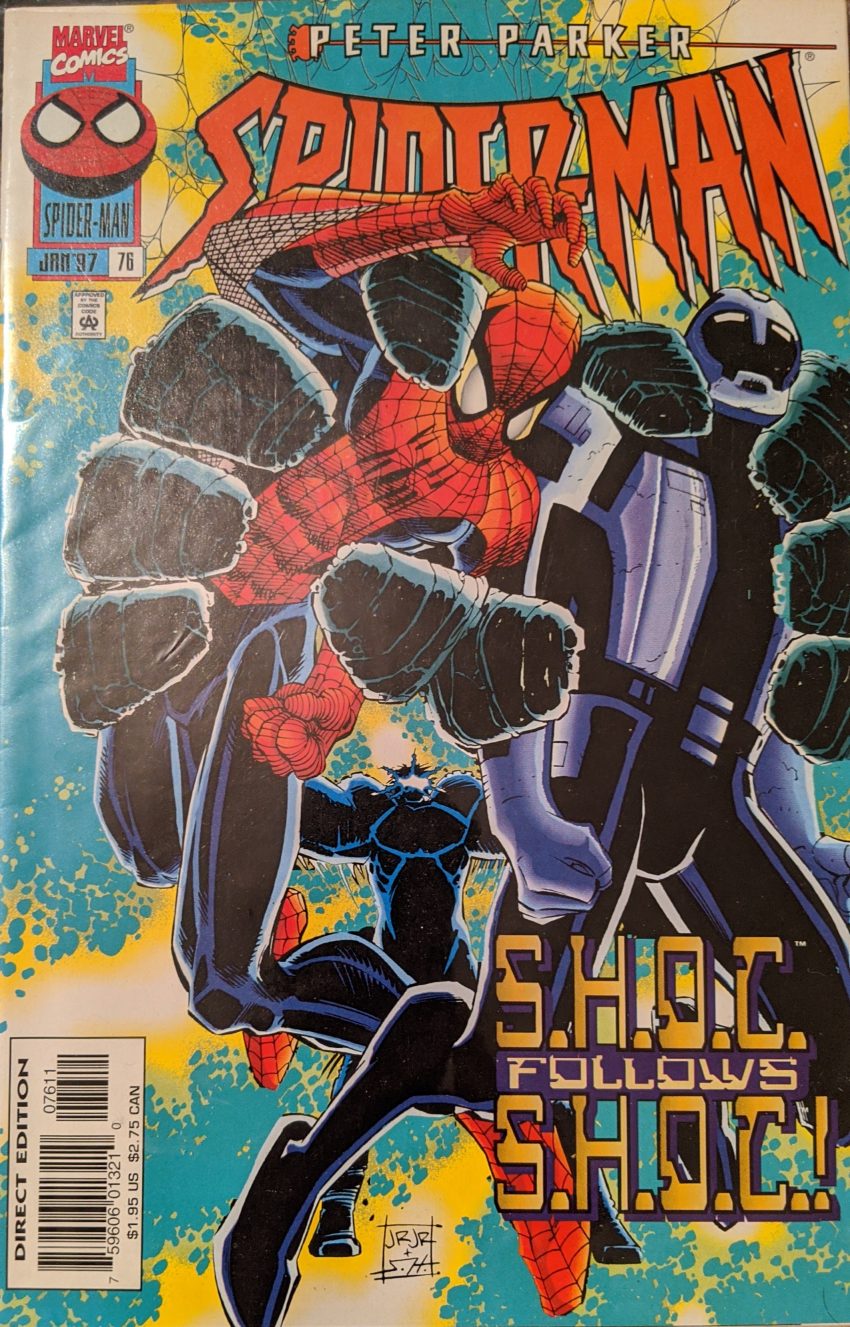 Now here’s a weird one. One of the few issues I really remember from this period. It begins with an extended flashback in JRJR’s unique style:

The Fields family hid in a warehouse, and the doc gave his notes to his wife to deliver to a Sydney Lanning. He got them out of the building just in time for them to avoid being caught in a massive explosion.

Pretty weird stuff. In the present, in a another horizontal 2-page spread, Peter wakes up MJ way too late for their meetings at ESU for going back to college, and they scramble through their morning and out the door.

So much of Peter & MJ’s marriage was characterized by strife and sorrow. It’s fun to see them just living. At The Bugle, Peter runs into Flash Thompson in the lobby, and they take an elevator up together. Flash asks if Pete’s heard Gwen’s uncle is in town. Pete says he has, but they’ve  not met and he’s not eager to. When the elevator opens, Betty is there.

Well, that’s convenient. But, honestly. Bugle stuff. Flash and Betty. Even the ominous and ultimately pointless spectre of Arthur Stacy. All this feels more like a Spider-Man comic than the last 3, 4 years’ worth of book, in this period. Even Peter’s rather tired return to school is welcome, at this point, compared to the mountain of crap that came before it. MJ’s having trouble getting her transcripts when someone off-panel calls out her name and surprises her. But we cut back to Peter & Neil walking and talking. Pete says Neil’s grades are very impressive and wonders why he needs tutoring. He says he wants to get on Lannig’s project, too, and for quantum mechanics, he was told Peter is the man. Um… how? Two time dropout Peter Parker is the man in bleeding edge science? Who says? Then they see a big purple explosion from the lab they’re headed to. Peter tells Neil to go get help, and Neil rather amusingly says “YOU go get help,” so Spider-Man is not present as they enter the building to find…

Peter clotheslines his pursuer, finding him to be a flesh & blood dude instead of some monster. Crown says he won’t let them shut down the generator ‘til he gets Fields’ notes, and demonstrates his weird gun on someone who tries to shut it off, anyway, hitting them with some kinda purple radiation and calling it a preview of what’s in store. That’s when Spider-Man shows up. Crown is very upset about the presence of a superhero, but he’s not yet begun to get mad, because a 2nd one shows up. Not one we know, tho. It’s the guy on the cover, SHOC. Crown recognizes him, and gets even more upset. SHOC calls Crown’s goons “Lame-o’s,” which makes Crown say this isn’t the SHOC he knew.

This is pretty awkward stuff, dumping us into this running battle between characters pretending they’ve been around for years. Also, how does Spidey know SHOC is an acronym? Is Crown saying S-H-O-C? Spidey hits Crown with the ol’ wbe in the face so SHOC can try to shut down the generator. He finds out SHOC’s suit is “part of him” as SHOC starts absorbing the energies of the generator. SHOC also tells him he’s rendered the generator a portal back to where Crown and his goons came from, and tells Spidey to chuck them in.

Jill. Stacy. What a terrible idea! What possible purpose could she even serve? Answer: Very little! And, obviously, we know Neil is SHOC and that’s why he’s so keen to be on Lanning’s project. Spidey is tutoring a superhero. An interesting design on him. Very representative of its creator. We’ll obviously see him again. And also more of Jill Stacy, for better or worse…