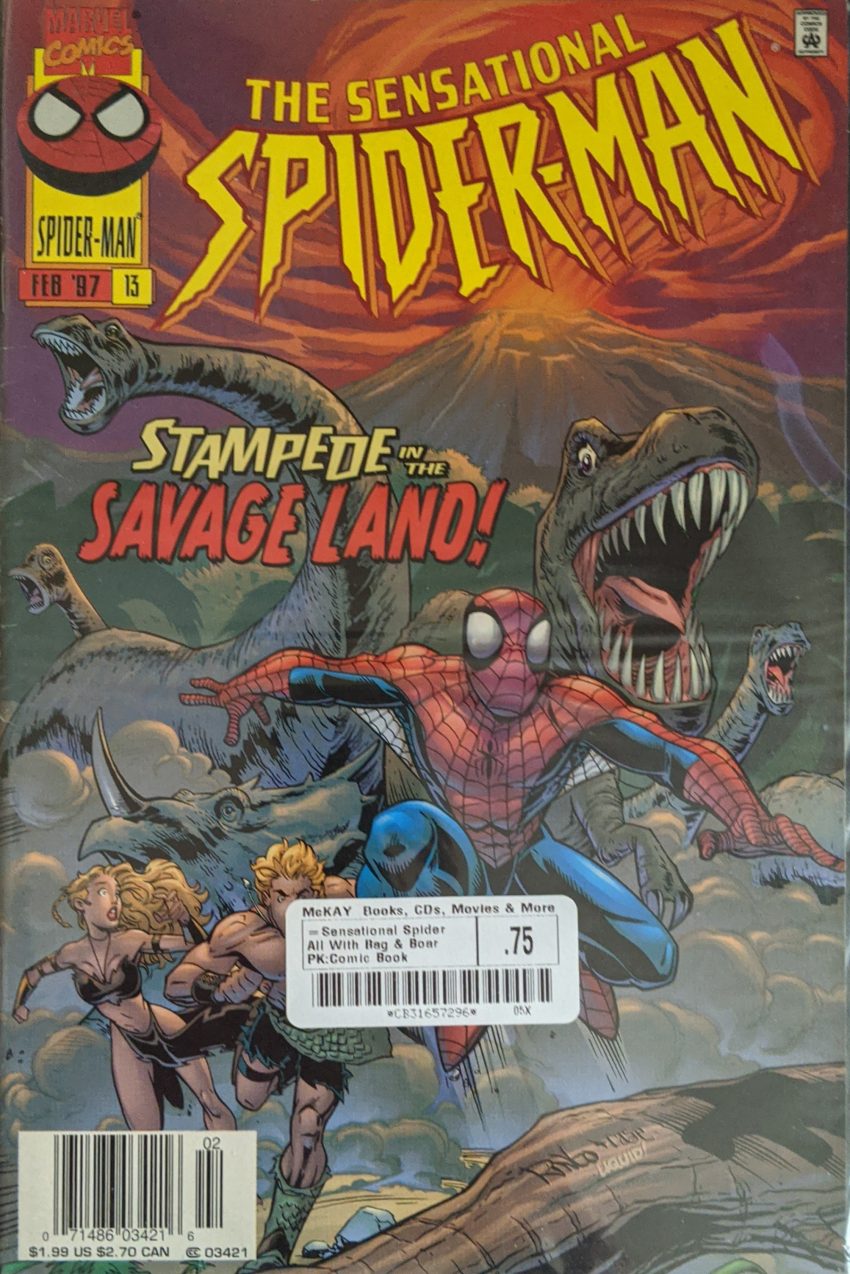 I cannot tell you how glad I am to see Mike Weiringo again after last post. This Savage Land 3-parter is weird to me because I only bought part 3 at the time? Why did I do that? Maybe I didn’t know it was part 3, but then why did I buy it at all? My choices were confusing sometimes. As the dust settled on the clone mess and the line stopped being one continuous story, I more or less whittled my pull down to ASM and SM. Sometimes I’d buy TAC because DeMatteis would be the only one to really follow up on Norman Osborn and I felt like that was important. But he also did a bunch of immensely stupid stuff I just skipped, and this book… If ASM is about to shift into a Greatest Hits mode for a while, with DeFalco bringing back or replacing classic characters, SSM is Greatest Misses. And at the time, I hadn’t developed an appreciation for Weiringo (And to be fair to young me, he’s a couple years from a quantum leap that will take him from a solid cartoonist to one of the absolute greats of his day). It was easy to skip. But, hey, 75 cents! Soooo, after a 1-page prologue where a shadowy beast is awakened…

Still seeding the college thing. Don’t know where to go with Spider-Man? Back to college. He’s gone back to school a million times. He’s recently gone back in school as I type this in 2020. Peter has gone back to school at least 4 times since graduating in ASM 186, if memory serves. He really sucks at it, apparently.

So everyone disembarks, making this one of the only stories in Marvel history where a vehicle successfully lands in The Savage Land instead of being shot down or attacked by a dinosaur, and they head into a complex where we learn Roxxon is working on this, so that can’t be good. Then we meet a Dr. Gerald Roth, head of the project, who says he’s grateful the news is here to get the word out about how dire the situation is. As he starts his speech, Peter slips away, and soon Spider-Man is bounding around the landscape, hoping to get the real story from his ol’ pal, Ka-Zar.

Honestly, I was a dope for not being all-in on ‘Ringo yet at this stage. Look how CRISP everything is. What I’d do to have such a sharp line! Anyway, Ka-Zar has gotten word that a nearby dam is over capacity and going to burst, and this village will be wiped out unless they can do something.

Quick interlude so the still mysterious but obviously avian monster can tromp around, then we’re back to the SHIELD/Roxxon site, where they’re trying to solve the dam issue. The ice caps are melting so fast they could put the entire Savage Land underwater in a month. And if that’s not bad enough, frozen in the ice, we see Stegron The Dinosaur Man (Last seen on the blog in MTU 20, but last seen by Spidey more recently).

And so a race against time begins as Ka-Zar, Spidey and SHIELD try to help The Fall People get out of the area before doom arrives, all while fending off a stampede of prehistoric beasts. Spidey and Ka-Zar go see Shanna and Zabu, the former of which is tending to a sick child, when things get worse.

Our heroes and the sick girl are the only ones left in the village, and they’re able to escape up into the trees before getting drowned. And then, you’ll never guess…

GASP! The most cartoonishly evil corporation in The Marvel Universe is not being honest about what’s happening! I can’t… believe it!

I mean, how am I supposed to react to this? Who in the world is going to be amped up about a monster chicken? This makes Gog in Spidey’s first visit seem positively essential. These last couple issues have had like ⅓ more pages than usual to fill the back with promotional material about upcoming series and stuff. I keep being surprised when they end because there are so many pages left.