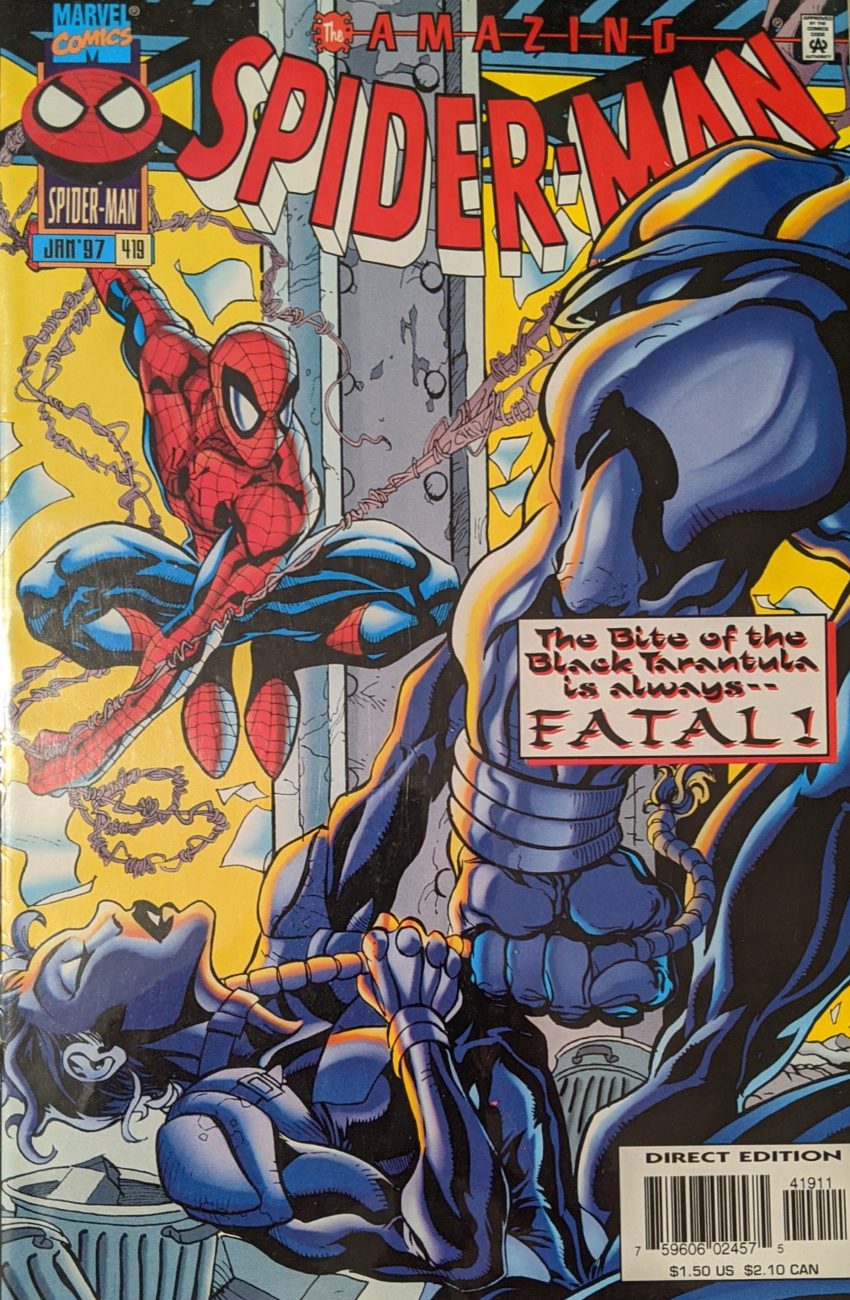 Almost illegible cover copy is an unfortunate hallmark of the period. The BLACK Tarantula. Not The Tarantula. That’s another guy. Or is it?

That’s right, it’s time for YET ANOTHER mystery man! Who is The Black Tarantula? Who cares? Elsewhere, Spider-Man watching Ben Urich meet with an informant, but can’t hear what they’re saying. Ben’s being told about a deal between The Rose and The Black Tarantula for a million dollars in smuggled emeralds, but he’s never heard of The Black Tarantula.

Skroce’s Spider-Man is ok for the period, but I don’t really care for his, uh, anything else. Spidey finishes beating up the goons and then Peter & Ben head back to The Bugle, where Robbie is low on work for our beleaguered hero. Let’s get some exposition about Black Tarantula…

Delilah and her ridiculous fonts are BACK! Meanwhile, MJ & Aunt Anna have been painting over the walls of what should have been Baby May’s bedroom and break for lunch. Anna says she’s enrolling in a bunch of adult education classes she’s interested in, and asks MJ if she’s thought about her future.

So Anna is the new May, and killing May was even more pointless than it seemed.

As he changes to Spider-Man and heads out after the emerald thing, Peter thinks college could be just what MJ needs, and also that he could finally get his masters. In School Forever: The Peter Parker Story.

“He’s the most dangerous, most scariestest person in the universe, and that’s why you’ve somehow never heard of him!” Peter calls Ben to see if he wants in on the emerald bust, and Ben says no, but then goes, anyway. He passes Angela Yin, who’s randomly come across a photo of the evil doctor who handled MJ’s birth. What a strange coincidence. Then, all credit where it’s due, Skroce does one of the better “Spider-Man moving through his acrobatics” sequences I’ve seen.

Bit hard to photograph, but the movements make perfect sense and flow nicely. Sometimes (Especially in this period) guys trying their hand at this trope just draw 6 or 8 random Spider-Men and move on, but this is an actual sequence of moves. So the deal is set, Black Tarantula’s guys are ready for a doublecross, and Ben & Spidey are ready for action.

Wait, what? A six-letter word that begins with “and” and ends with “h?” “And__h?” What… what word is that? Is he trying to say “ambush?” What… Anyway, BT’s henchmen start shooting to kill immediately. Spidey is horrified and jumps in, while Ben calls the cops. While Spidey fights various goons, the big one smashes Delilah into the ground like she’s nothing in spite of her strength and gimmicks before discovering a bomb in the money bag she brought.

Spidey just poking him in the eye is legit great. Delilah arms the bomb remotely as she flees, and Spidey has just enough time to scoop up Ben and run for it before the explosion catches the big guy, various other goons, and Peter’s camera.

Of course that wasn’t The Black Tarantula. We gotta drag this out. One of the guys most responsible for making The Hobgoblin secret drag out way too long essentially giving it another go with what is destined to be a far lamer character is highly ill-advised, if you asked me. But here we are.