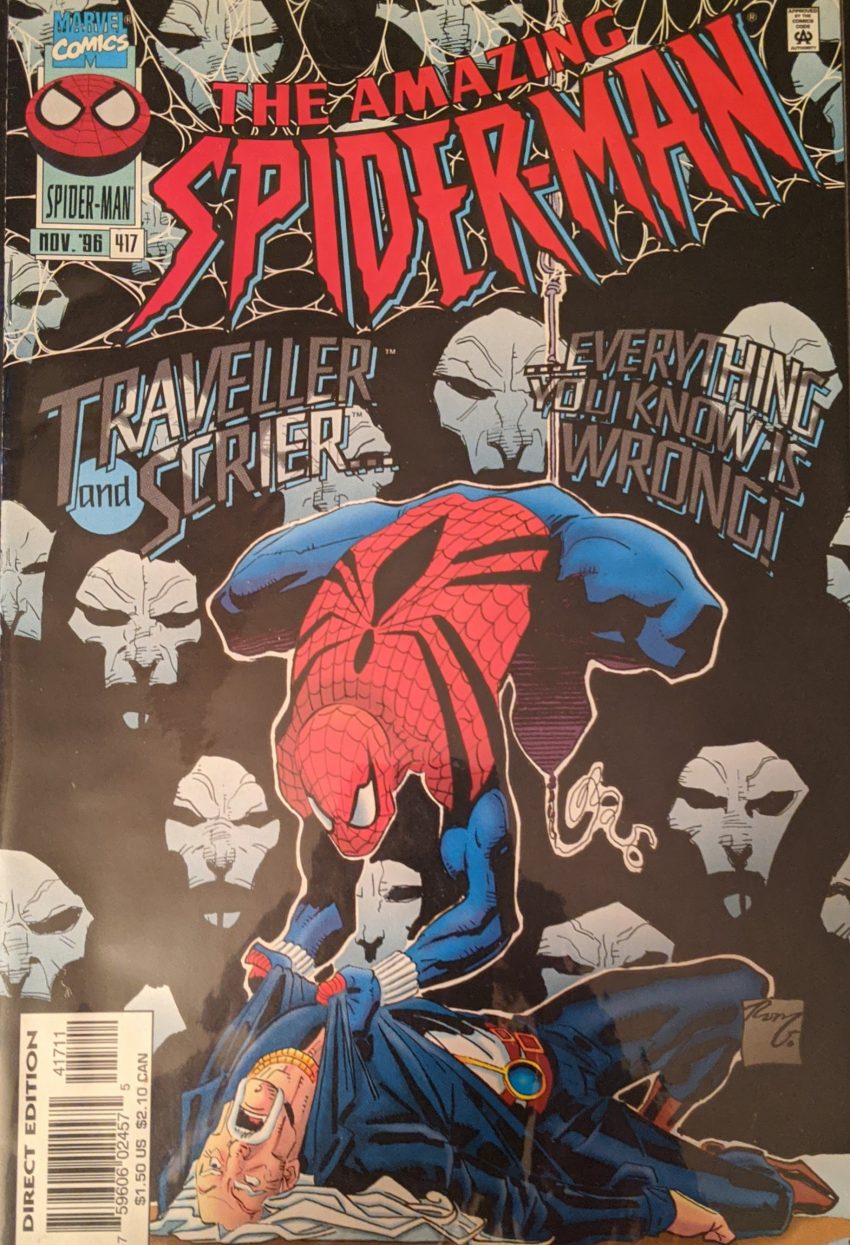 Gasp! Everything I know is wrong? But I didn’t want to know in the first place! Time to awkwardly retcon everything DeMatteis was trying to do with these 2 losers because it had no place in Spider-Man comics. Weird eyes on Spidey. It’s Tom DeFalco, Ron Garney, Al Williamson, Bob Sharen, and Graphic Colorworks on deck here as we see Judas Traveller in chains in some kind of Ditko dimension. And we’re not the only ones.

Betrayed! This is followed by a 2-page fight scene in which most of Traveller’s touring band tries to kill Chakra for not participating in the betraying. She implies this is all Scrier’s fault as she flees. Honestly, I couldn’t care less about these doofs.

Avowed pro-lifer Ben Reilly likes the vile future face of the antivaxx movement. This guy can’t go soon enough! Peter mentions Aunt Anna has moved in with them to help with their impending child, thereby more or less replacing Aunt May and rendering her death even more pointless, and Peter asks Ben to be little May’s godfather. How sweet. Then Peter gets a beep from Robbie, who says John Jameson was hoping Peter could get in touch with Spider-Man.

We see Traveler in some kind of coffin underwater. Excellent place for him! Meanwhile, Both Spider-Man and Peter head to Ravencroft. If nothing else, this whole clone nonsense really helped Peter make sure no one thought he was Spider-Man. When they arrive, John lets them know Chakra is there, and she’s asking them to help Traveller. Well, one of them. Ben won’t let Peter go on account of his being a dad.

Anna even looks a lot more like May here. Hang on, time for some retcon exposition…

So did Doofus Traveller have his breakdown before or after he met his “host?” Because if my boss had a bad day and suddenly started telling me he was thousands of years old, I think I’d quit. Just me. Charka’s expose is cut short by the arrival and attack of Boone and Medea, who are somehow a threat in spite of just being 2 dumb stereotypes with guns. As Spidey clocks the lames, Scrier meets with The Rose to discuss a proposed partnership. The Rose says his “European contacts” dug up a lot of info on Scrier, and he’s not excited.

I understand that bit about the ancient guy was a small caveat to DeMatteis, who is currently trying to use his version of Scrier in Silver Surfer as this issue comes out. Whoops. How could he learn everything in this much detail and not know who the “unknown mastermind is?” Say, you don’t think this unknown mastermind might play a role in this comic soon, do you?

Why is Peter constantly refusing to put the whole suit on?? How is this better?? While Ben fights the army of Scriers, Charka leads Peter to go rescue Traveller in this gym’s pool, which he does. Meanwhile, Scrier threatens to kill The Rose for learning most of his secrets. Scrier tries to, I dunno, get revenge by telling The Rose he’s gone by other names, like Richard Fisk, The Schemer, and The Blood Rose (Don’t ask why he had to add the blood), but The Rose quietly says he’s not Richard Fisk. Is he? Don’t remember.

In spite of having been revealed as a fraud this very issue, Traveller somehow sucks both Spiders and all the Scriers into the Ditko dimension he was trapped in, and then they all are back in the gym, with the bad guys unconscious. I dunno, man, who really cares?

Right-o! Clearing the deck as fast as possible. Not much time left…