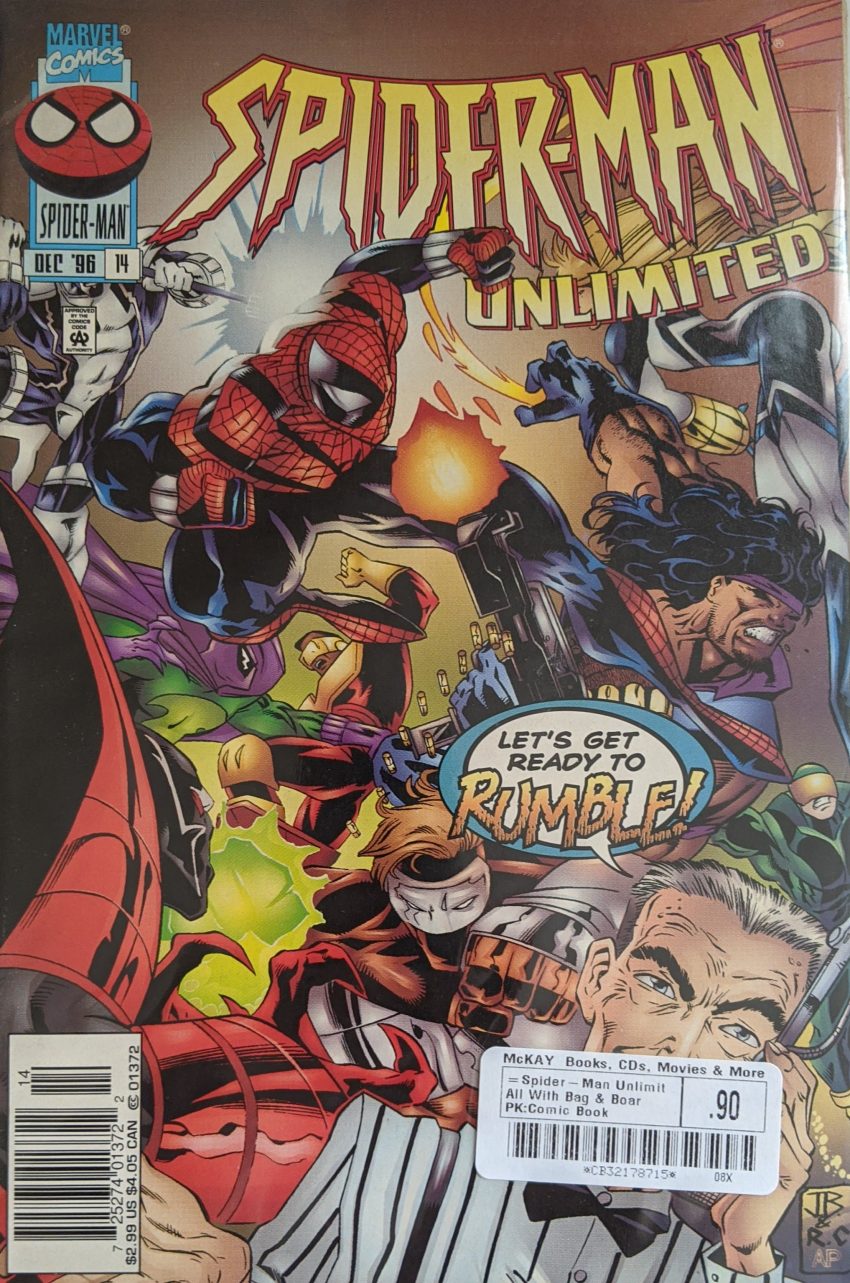 Cover price: $2.95 (In 1996 dollars). Your price: 90 cents in 2019. It’s easy to see why I would skip this book as a kid. It cost way more, and yet it was utterly superfluous. Nothing of merit is going to happen in Spider-Man Unlimited. It’s kind of Exhibit A of what was wrong with comics then. Kinda cool eyes on Spidey on the cover. That’s JJJ on the bottom corner covered by the McKay’s sticker. In the spirit of continuing to clear the deck, it’s time to wrap up The Great Game. Remember that? Jimmy Johnsmeyer and all that crap? It’s gotta go. Still something I think could’ve had potential, but as published, no great loss. Preparing to put this thing to rest, we have Glenn Herdling writing, Joe Bennett penciling, Joe Pimentel & Tim Dzon inking, and Christie Scheele coloring. This opens very confusing, with The Scarlet Spider waking up, not sure why he’s in that costume, in some kind of mortal danger not communicated very well by the art. I think he’s tied to the top of a bridge, and then the straps holding him all pop loose for some reason? He tries to save himself, but…

Looks like El Toro Negro, one of the players in The Great Game. Later, Ken Ellis and Peter Parker are at The Scarlet Spider’s autopsy for some reason, where the doctor says his body is so mangled they can’t tell much about him, but they’ve learned he was Asian. Ellis asks how they can be sure it was really him, and the doc says the webbing around his wrist makes a compelling argument. Does it, tho?

I literally can’t tell who Peter is looking at in panel 6.

Robbie acts shocked and looks horrified to see Peter and Spider-Man side-by-side. Herdling seemed to want to make it official that Robbie had figured out Peter’s secret only to change his mind in the space of 3 pages. Spidey pushes JJJ in to his webbed chair and leaves. Peter inexplicably screams in Robbie’s ear that he’s meeting his cousin for lunch in the commissary. The volume is obviously so Ben will hear him, but I don’t know why Robbie had to go deaf for this. Bennett is making a ton of weird choices here. I may have talked about this before, but I was not a fan in this period. As an adult, I see he has better fundamentals than a lot of guys in this period, but he’s a long way from his excellent work on Captain America & The Falcon in the early 2000s, let alone his earthshattering run on Immortal Hulk more recently. While aping Jim Lee is still pretty much the standard in this period, the explosion of Lee employee J. Scott Campbell on the breakout hit comic Gen13, doing a slightly more cartoony version of Lee, has led a sect of newbies to copy him. Luke Ross is doing it on all the non-Spider-Man figures in TAC, and Bennett is doing it here. Aaaaaaanyway, Peter meets Ben for lunch. Ben explains The Great Game to him, and how he thinks this is a “rogue player.” Rather humorously, Peter gets all in his face about power & responsibility, saying if Ben knew about this stuff and knew one of the sponsors, he should have done something. When Ben first hit the scene, they had him commenting on how irresponsible Peter’s deal with Venom was to prove he was the better Spider-Man, and here we have a direct parry as Ben’s time in the suit grows short. But they’re interrupted by a ridiculously oversexualized Betty Brant.

Ben Reilly has only been an official cast member of this book for about 2 years, and he’s already not only had 5 potential love interests, but now he’s circling back to one of the earliest ones. For a guy who spent most of that time dead broke and looking like a homeless guy, the man stays busy. Hang on, here’s some exposition…

Ok. Betty didn’t ask what this is about? Why Peter is running off to investigate alone in spite of not even being a reporter? Whatever. On the elevator in that Morelle place, Betty accuses Peter of being jealous of her flirtation with Ben. Then they meet a scientist named Ashley Croix who says Project: Sharkskin died with her husband. While she makes corporate excuses for why Johnsmeyer wants to buy her company, Peter looks through a window and sees a kid grow crazy long arms to dunk a basketball. Croix tells him he can’t be snooping, but then there’s an explosion in that room.

It’s gonna be nice to never see dopes like Polestar again. Peter lunges at him, secret identity be damned, I guess, but is easily dispatched. Polestar says that, as Project: Sharkskin’s only successful test subject, the kid is a nie bonus for him, But then Nightwatch bursts in. Have we seen Nightwatch? We will eventually. He’s a blatant and embarrassing rip-off of Spawn, himself rather a rip-off of Prowler & Spider-Man. The snake eats its own tail. In spite of him being a lame knockoff, I have always kind of loved his existence. All the Image founders’ “original characters” were just barely altered, barely thought out copies of their favorite Marvel & DC characters, and they made a fortune peddling their off-brand X-Men and Avengers and whatnot, so the idea of Marvel going “2 can play that game!” just makes me laugh.

He’s just Spawn, except his living armor is mechanical instead of a demon. El Toro Negro, shows up (This place is a real hotspot), and he & Polestar team up against Nightwatch. They kill Nightwatch, and then Toro kills Polestar. This is going well! The badly battered Peter Parker asks where Spider-Man is in all this and then passes out. At Ben’s job, Buzz is talking about how people should read the paper because that’s, like, his personality, when Peter slaps a Bugle in front of Ben saying Nightwatch is dead.

Glenn Herdling apparently deciding Peter doesn’t care who knows he and Ben are Spider-Man is insane! What is really going on here? I love Ben being like “Well, now that you’ve had to watch people die and stuff, I GUESS I can look into this.” Real heroic. Meanwhile, James Jonhsmeyer, suddenly being rendered an old man in spite of past appearances, gets a visit from Cardiac. Who… has probably been on this blog? Yeah, ok, he has. I get lost.

This comic is strictly amateur hour. Even the lettering is bad. Spider-Man bursts in and he and Cardiac fight for a few pointless pages until they stop when Spidey asks Cardiac how many points Johnsmeyer is worth in the game.

Everybody’s a something-monger to Cardiac, apparently. That Chi-Huan place was Johnsmeyer’s next acquisition target, and soon Spidey is there, finding the building really creepy and weird and deserted already around 5pm.  As he investigates the seemingly empty building, he’s attacked in a bathroom.

They’re all here. Every generic junk character produced by The Great Game swinging by for one more look. What a, um, crock of… of baloney. During their short fight, it is revealed that Chu Chi Huan is Joystick’s sponsor in the game. Then she runs off saying she has a date with a pro wrestler, which reminds Ben he had a date with Betty, so we literally just smashcut to that date. This single comic seems intent on having as many instances of both Peter and Ben being completely irresponsible than the entire published history of Spider-Man. Betty tells Ben JJJ asked her to compe by a Bugle fundraiser at The Century Club to congratulate her on her first byline like she hasn’t been a reporter since the 80s, because no one making this comic cares about anything, and they’re off.

You ARE a reporter, Betty! You have been a reporter for YEARS. Someone needs to do their research! And maybe you should get the story of why Marla somehow looks younger than you! Johnsmeyer introduces his business partner, a deep pull from the Stern era called George Vandergill, to Jonah, and invites him to join The Great Game, but Marla easily talks him out of it by reminding him of Spider-Slayers and The Scorpion and whatnot. And then, another pull from Stern…

A not-so-thinly veiled reference to Marvel becoming a publicly traded company and almost immediately going bankrupt from JJJ. Why all these old Stern guys? Well, there is a reason, but we’re not gonna see it for awhile. Leaving the party, Ben & Betty see Prowler and Rocket Racer zoom overhead in mid-fight, but Ben ignores them to make out with Betty, because he is a terrible Spider-Man all of a sudden. RR & Prowler are pretending to fight to somehow, uh, game The Great Game, but El Toro Negro is onto them, and fires a missile at them. They go crashing to the street.

RR’s Mom is somehow more offensive than all the gang members Tom DeFalco has written in one page! Racer was working for Paris Scott, who I believe was the only other player ever mentioned previously, so that’s Ben’s next stop. He’s too late, though, as Scott has already been shot in the back. An employee arrives in time to blame Spider-Man, but then they both go through Scott’s records to uncover the other players in The Game like there’s not a bleeding corpse in the other room, this comic is ridiculous. Spidey says, “Oh no, not him!” and we cut to El Toro Negro about to kill JJJ & Marla when Spidey arrives.

Toro & Chance team up against Spidey, but then Cardiac shows up to help, so it’s 2v2. But Cardiac disappears about as fast as he showed up, and then Chance is suddenly gone, and now it’s Spider-Man vs. Toro  smashing through the roof of the apparently nearby Johnscorp building, where Joystick is waiting for them. This is kind of interminable.

Bazarkk!  Any writer who uses “You still don’t get it, do you?” should be fined $5 per infraction.

What an unbelievable lazy ending! Chance swoops in to fly off with Toro to try to collect a bounty on him, with Cardiac close behind. Spidey wants Cardiac to go after them, but he reminds our so-called hero their priority is the child kidnapped like 50 pages ago. Chance brings Toro to Justin Hammer, who is revealed to be behind the whole thing, and he apparently kills him for doing a great job. Woof.

Because… someone else got to write a story at a newspaper…?

In recent issues, we’ve seen Ken Ellis retconned into The Bulge staff years too early, and now aggressive attempts to make Betty seem like a neophyte reporter despite years in the game. I am so confused.

But… they explicitly said JJJ wasn’t a player. 2 players came to him to offer him membership and he refused IN THIS BOOK. What… on Earth. This was a disaster. Good grief. Well, there you have it. Sadly, while The Great Game is over, due to the time travelling nature of this blog, we still have to see it begin someday (Block 36). But then we can put all this behind us.