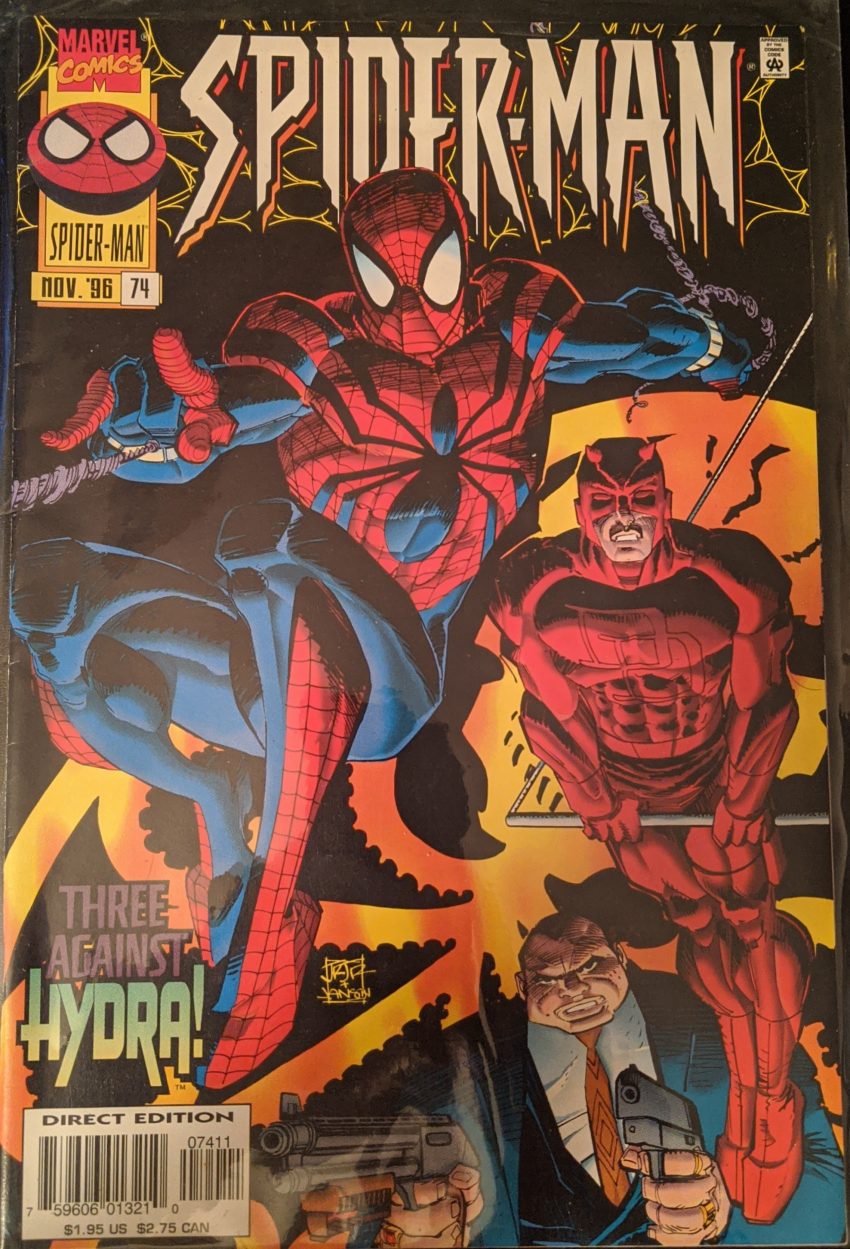 Never unhappy to see DD in these pages (Well, maybe in the awful Web of Death story…). Never unhappy to see JRJR working on him again, too. And he kicks things off for us this issue, engaging a bank robber named “Bolt” in the kind of big chunky robot suit Romita excels at drawing.

Seemingly all the bosses who allied themselves against Fortunato last issue are now on board and on stage with him as he presents his plan to unify the NY underworld with Hydra, and then they reveal Spider-Man strapped to a giant machine. Spidey recaps how he got there and is very sarcastic about his betrayal by Jimmy 6 as Daredevil arrives outside and notes the Hydra presence.

I feel like not wanting to kill your own son is a pretty reasonable position, random dude in the audience. The tension mounts and Fortunato disowns Jimmy, Jimmy refuses to budge, and the still groggy Spider-Man straining against his bonds. But this is more or less Spider-Man Must Lift A Heavy Thing, so he succeeds.

Lucky for him, one of the things behind him is Daredevil, who crashes into the goons taking aim at Spidey before they can kill him. He helps as Spider-Man leads the civilians off the property, but they’re pursued by a rather large mob of Hydra goons. A big wall of web gives our heroes a second to go on the offensive in this book’s 3rd 2-page spread and 2nd horizontal one. I guess Romita was really in the mood to go big.

The boys keep trying to get the regular people to safety, and they hit a snag when the front gate is locked and dozens more goons are on them. But then…

Spidey sees Tombstone fleeing the mob below and drops down to pick him up over Jimmy’s protests.

Now there’s an abrupt ending. Kinda feels like these guys were just having some fun before the big crossover coming next month. As Marvel Editor-in-Chief Bob Harras had decreed the clone debacle must go on another 6-months right as the team was trying to end it for the 2nd time, everyone basically got a free pass to just do whatever ‘til then. But that was about 6 months ago… This issue includes a memorial for the late, great Mark Grunewald, who died suddenly of a heart attack at only 43. So sad. We’ve seen some of his work here on the blog, but unfortunately none of the stuff he’s rightly beloved for. A tragic loss for Marvel in particular and comics in general.