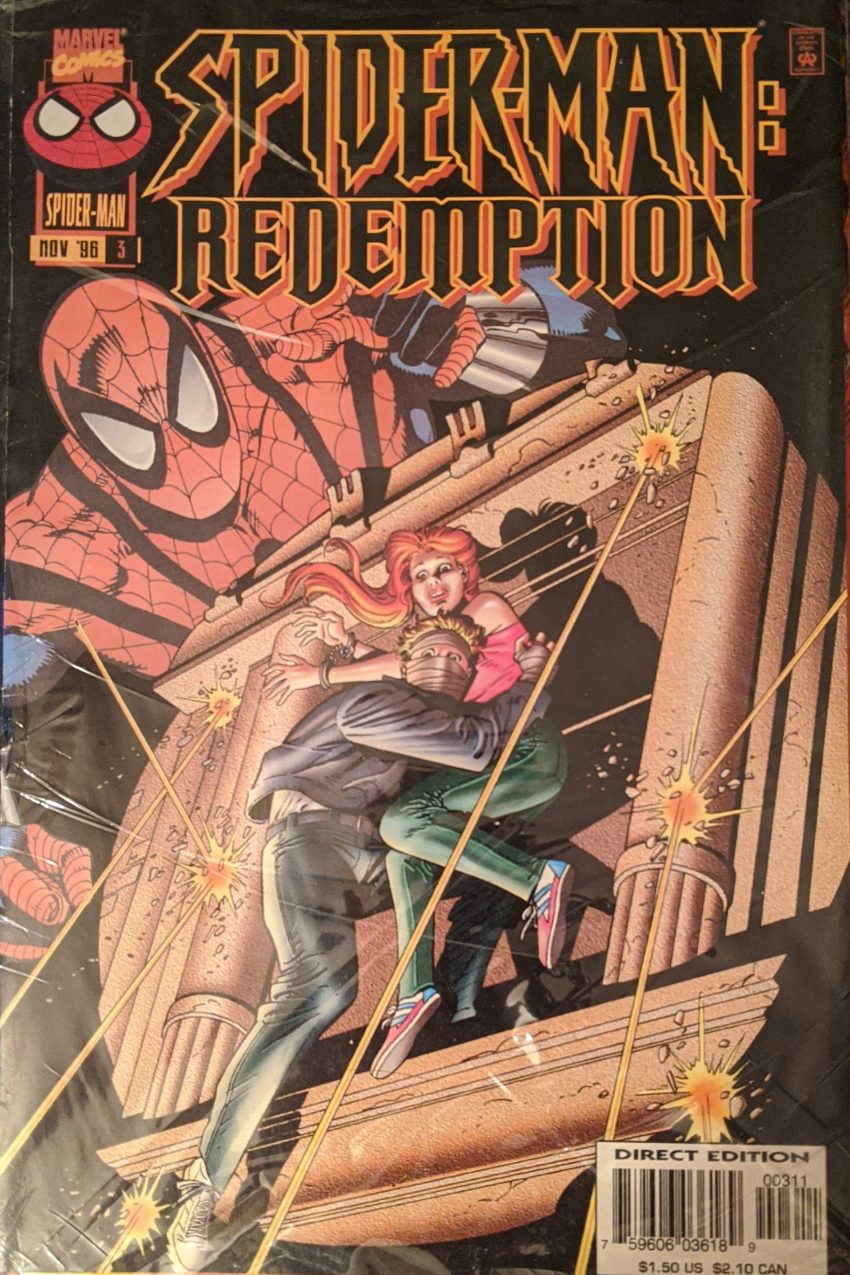 We get rolling this time with Janine being loaded into a police van as reporters throw questions at her and she ruminated on how she “killed” Elizabeth Tyne and how Janine Godbe is the person she always wanted to be (This whole killing your old self thing sure is prevalent in DeMatteis’ work). As the van tries to lose the press, a figure follows on the rooftops, and soon he’s standing in front of the van.

Ben, of course, more or less in his crimefightin’ outfit from Lost Years. I guess he didn’t want to implicate Spider-Man. When he gets Janine far from the cops and takes his mask off, he’s surprised how mad she is.

“That maniac Kaine” AND “that lunatic Kaine” in just 3 panels! Kaine has a long DeMatteis internal monologue about how he did all this wanting to hurt Ben & Janine and now feels shame for it as he has one of his seizures and falls off a roof, and as he gets up, rips off half his Kain suit and yells that he won’t wear it anymore, scaring a homeless guy. It even continues as he proceeds to berate and attack said homeless guy, thinking about how he wanted Ben to know he’s as bad as Kaine, but now he wants to be as good as Ben. I dunno, whatever.

He’s right about that. He’s had to avoid everyone Peter knew, there was no reason he had to do that in New York. He tells her May is dead and everyone else he used to know is either dead or “irrelevant,” and now it’s all about her. But he has to know how she’s not dead. So she flashes on back. They were living a pleasant domestic life in Santa Cruz, making ends meet and keeping under the radar. But of course…

Kaine… ugh… Kaine drove her to San Francisco, to the Golden Gate Bridge, and took her up on top and reminded her of the Gwen Stacy story. Uggggghhhhh even when they’re on the opposite side of the country we have to rehash this!

Boom, indeed. How’s this gonna go? What will befall Janine? We’ll find out together next time, because I honestly don’t remember.