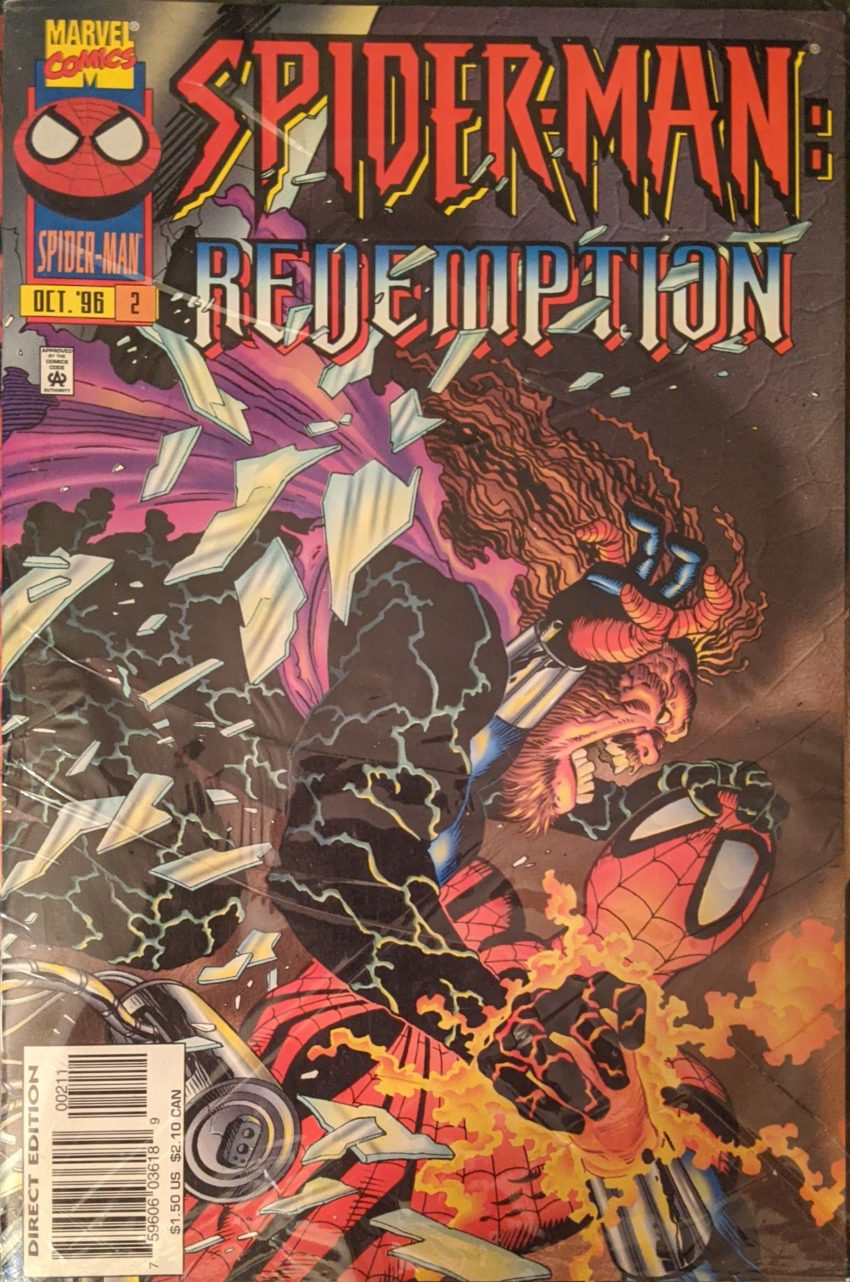 Alright so Kaine just killed Ben Reilly’s one true love and left him to mourn her in this weird pile of mannequins.

You can tell he’s Peter Parker by the way he threatens to kill an enemy and then gives up instantly.

WHAT??? I am… speechless. This is monumentally silly. I mean, I guess I’m glad they didn’t fridge Janine just because it’s such a tired and awful cliche already back in ‘96, let alone now, but… This is stupid, man. Anyway, Kaine is now nude and looking at himself in a mirror somewhere, probably The Jackal’s lab, given the machinery around, but the full length mirror partially covered by a sheet feels out of place. Internal monologuing about how he’s a failed clone and no one could understand his suffering.

Whatever, weirdo. Kaine puts his tights back on and says Ben will learn what it’s like to be Kaine before they die together, and then goes to check on his captive.

Yeesh. Also, what about Janine would remind him of older, tough-as-nails, blonde cop Louise? The fact they’re both female? That’s about all they have in common! Maybe that’s all it takes when you’re a raging lunatic. Ben finds his way to the lab and Kaine welcomes him. He says Janine is safe.

I know Kaine is “degenerated” or whatever, but SOME resemblance between 2 Peter Parkers would be nice.

Ben finally gets mad enough to start fighting back as Kaine keeps on going with his weird internal monologue. He also catches Ben’s hand and burns it with his “mark,” and the pain gives Kaine the upper hand. He knocks Ben out. Later, Ben wakes up a little, enough to hear Kaine rambling about injecting him with something that will do to him what the degeneration has done to Kaine, then passes back out. When he wakes up, they’re at Aunt May’s house. Pete & MJ live there right now, but they’re not home, so Kaine drags the still mostly immobile Ben into Peter’s childhood bedroom.

Ben wakes up in his apartment, and fine. He finds the needle Kaine used to inject an antidote into him on the floor. Kaine’s “plan” makes less sense with every page. Ben also finds Janine asleep in his bed and waking up.

It’s not, tho. As they prepare to flee the city, the run outside and find the building surrounded by cops.