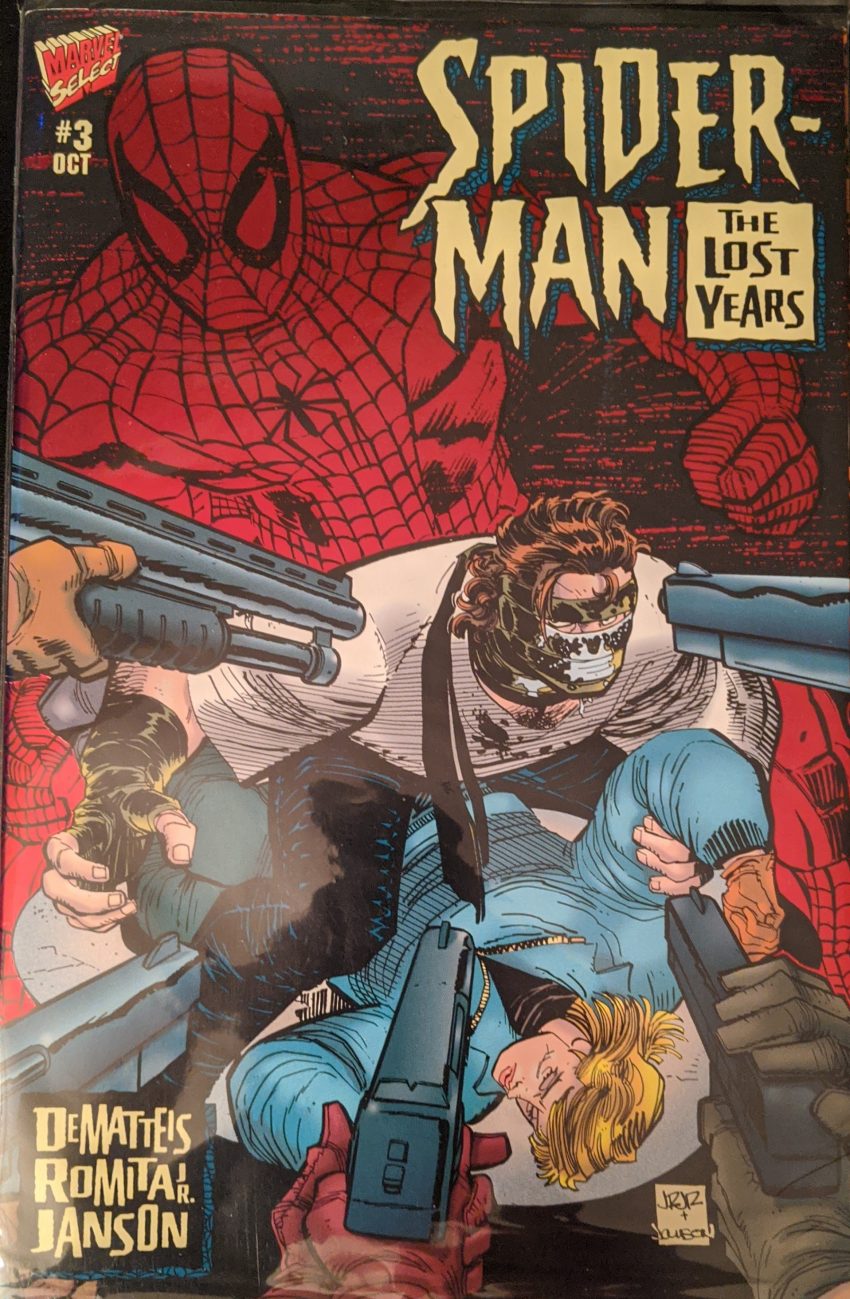 Ok, big finish. Kaine is watching through a skylight as his beloved Louise holds a gun on Ben and that Tannen guy looks on with Jacob Raven’s kidnapped son. Kaine is horrified that his beloved has turned out to be a bad guy. Which seems weird coming from a bad guy himself. Also, Ben is beaten half to death, and John Romita, Jr. really gets into drawing people all bruised and swollen. Nobody does it better, but it’s gross.

As he smashes a crate over his foe’s head, Ben thinks he couldn’t let Kaine kill Louise, that he was instinctively trying to keep him from killing the best part of himself in the process. But he also says he didn’t know Kaine was a clone of Peter Parker at the time, which opens up some really weird questions that I don’t think ever get answered. As they fight, Louise flees, making it out in time to get in Tannen’s car and speed off. They left Tannen’s nephew with Raven’s son, tho, so Ben is able to punch out the one to save the other, telling Matthew he swears he would never hurt him.

Look at this page! This page is a masterclass all by itself!! Oh, man. The art team is completely on fire on this book.

Really Batmanning it. Last we saw them, Ben & Kaine were slugging it out, and then Ben just showed up on the street. What happened to Kaine? Ben drags his battered self to Janine’s place, collapsing into the living room and passing out. He wakes up an hour later with her taking care of him. She obviously wants to know what happened, and he almost wants to tell her, but then he notes her bags are packed.

Doing the twin-in-jail bit this soon after Ben taking Peter’s place in jail is kind of hilarious. Like this is happening all the time, all over the world. Kaine snaps that Tannen’s neck, intending to kill Louise himself but when she says she loves him, he falls to his knees crying. Hey, it happens, buddy. Meanwhile, “Janine” is explaining her deal to Ben. How at 17, she shot her father to death after he’d been abusing her all her life.

Very different experiences with women for the fake Parker boys. Smashcut to Jacob Raven, who’s been pretty sure Janine was wanted killer Elizabeth Tyne for awhile, hence her apprehension around him. Louse shows up and gives him a version of what happened tonight, and then he decides to go arrest Janine right there. Seems weird. And Louise tags along, which seems weirder. Janine’s not home, tho. Ben is jumping around the city with her to prove the insane story he just told her about being a clone of Spider-Man.

This page looks super rushed. And how on Earth did the cops find them if they left town already? This thing seems to be coming off the rails in the end. Lousie plans to execute Ben, but he disarms her and warns Raven to leave him & Janine alone. They drive off toward the mountains, Ben suggesting maybe she should go back and get the truth out, clear her name, but she isn’t having it. And then Kaine tackles them off the bike. How does everyone know where everyone is? Was he following them? On a motorcycle??

As the boys fight, Raven & Lousie close in on them, Raven’s narration letting us know that he finally realized she’s dirty after trying not to over the years when she drew on Ben. Louise got there ahead of Raven, planning to kill Ben before Raven could stop her, but she’s confronted with Kaine and stops.

And thus, to my infinite surprise, a story by one of my least-favorite writers about some of my least-favorite characters closes out this block with easily the best thing I read in it. Funny. I haven’t read this since it was released. I would’ve only bought it for Romita, Jr., having the same feelings about the writer and characters then as now. And I’m sure I dismissed it outright because it was Ben Reilly. But, yeah, easily the best story in this block. Easily the best Spider-Man-related product of 1995, even. It’s frustrating that none of the emotion behind all this was present in the main books. Jacob Raven and his revenge quest felt superfluous. Raven didn’t get enough screen time for us to know or care who he was, and we obviously knew he had the wrong guy, anyway, so what did we care? He was a cop cliche. Now we get the backstory that makes him more human and interesting, and his story’s already over.  He only appears in one more comic after this. Just kinda feels like this book should’ve been published sooner. I guess they maybe couldn’t do that while keeping the twist of Ben (temporarily) being the real Peter a secret. But they probably could have. I dunno. Feels like a missed opportunity.  Well, at any rate, next post we jump slightly forward for the beginning of the end for Ben’s time as Spider-Man.