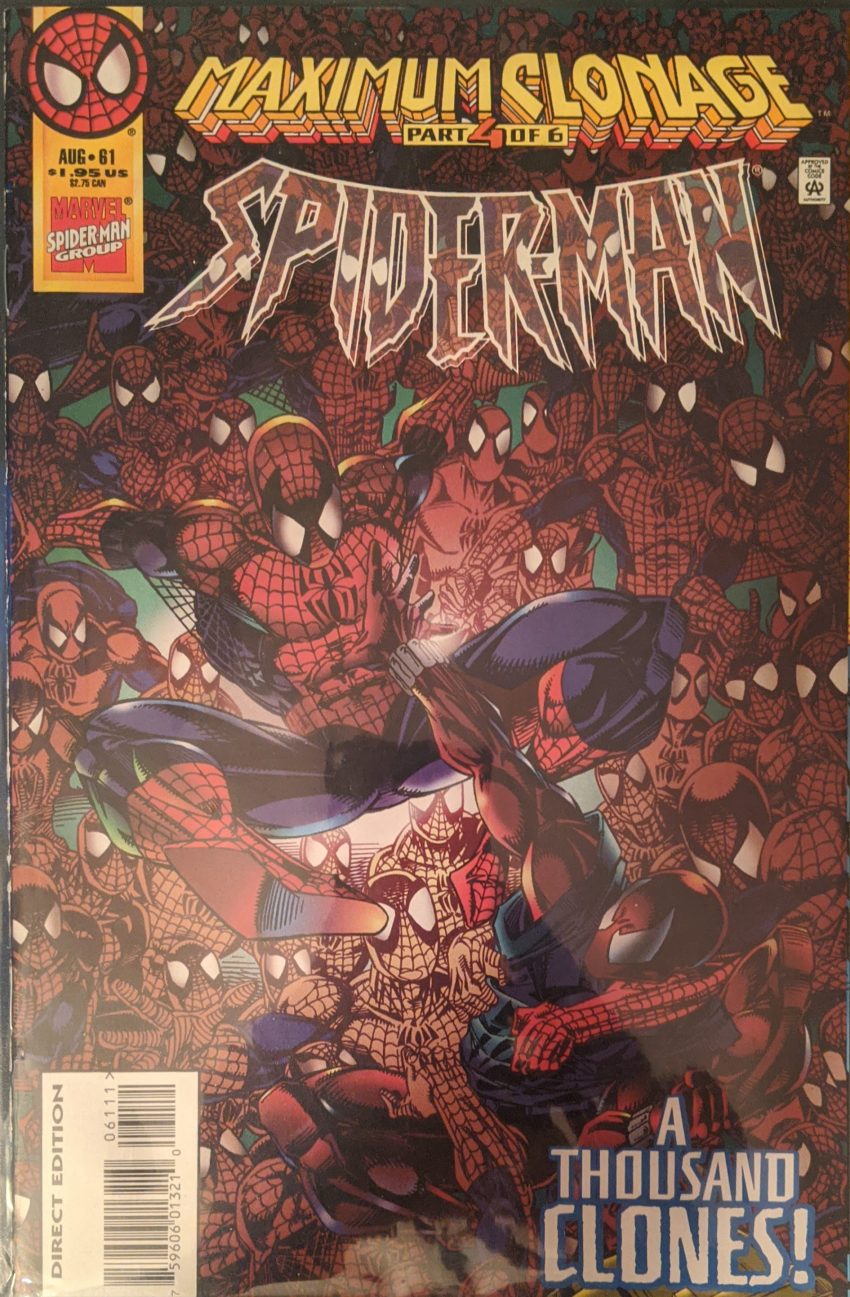 Howard Mackie retains scripting duties this month, breaking Todd DeZago’s streak. Having one person script this whole event might have been helpful if the story wasn’t garbage and that scripter wasn’t writing awful dialogue. Chris Ivy inks this one. Ben is still in that room with all the Spider-Men, and they attack him in a 2-page spread.

Ah, but Ben, you abandoned a life you thought wasn’t your own, and you didn’t do it to help a very poorly conceived villain kill everyone on Earth, your story is not the same. Also: You never hit your wife. Speaking of whom…

The fact that he smashed her across the room and made her face bleed is nothing now. Might as well have not happened, mere weeks later. And that’s how it’ll be forever. I guess I may as well quit harping on it, the past is the past. It’s just so utterly disgusting, such a grim failure on the part of everyone involved. Anyway. MJ can’t answer Kaine’s question. Kaine says Peter had everything, why didn’t he fight to keep it? MJ doesn’t know that, either. Hey, we’re off to The Jackal’s lab, where he’s being told to forget his old life and be happy here with his family Jackal says Peter needs something to focus on, and that’s bringing him Gwen Stacy.

Elsewhere in this apparently gigantic compound, Ben subdues a bunch of Spider-Men, but there’s always more to follow. The battle takes him crashing through a wall and right out of the lab. After taking out the immediate clones around him, he’s shocked to realize where The Jackal’s lab is, but we cut away before we can see. Um. He’s been here before. He came here on his own. How could he not know where it is? Back at The Parker residence, Kaine is still asking how Peter could throw his life away in different phrasings (He’s said the same thing like 6 times). MJ asks why he cares, and he says this all could have been his, and then recounts his origin. How he was the first clone, how Warren acted like a father to him and trained him to take Peter’s place. Until he had his first vision of the future, and then noticed the first visible sign of deterioration. Now that he wasn’t a perfect duplicate, Warren tried to kill him, but he saw that in his vision, and saved himself. Then he hung around Warren’s lab in the shadows watching the clone currently referred to as Peter take his place.

I maintain that Kaine being shocked Ben was the real thing would’ve been so much better. Meanwhile, The Jackal enters yet another gigantic room in his compound full of Gwen Stacys in pods, who all melt to nothing as he says none of them could come close to the one Peter is out to get. He’s reached her house, and she knew he was coming, or that someone would. Since her Warren clone died, she’s been remembering things.

Here’s the first positive thing I’ve had to say about a story beat in ages: Mary Jane talking sense into Kaine works for me. Because she’s right, if he’s supposed to be Peter Parker, he should start acting like it. It’s badly damaged by the fact that her Peter hasn’t “always done the right thing.” He has, in fact, tried to abandon her for no reason twice in 9 months (Can you believe blocks 9, 15 & this were just 9 months’ worth of comics?) and also, you know, punched her across a room. But whatever. Kaine is stupid, this story is stupid, but the tide of it has been turned by the pure force of Mary Jane’s will, and I appreciate that. Then we finally get back to Ben, who has discovered The Jackal’s lab is in the building with the smokestack he was dumped in at the end of the original clone saga. Again, he came here under his own power, how could he not know this? And last time he came here (In ASM 399), “here” was up in the Catskills, as I recall. Total crap, all around. More clones attack him, and it’s lookin’ bad, but…

Now they’re pals! Ok, sure. More of this dynamic duo next time.