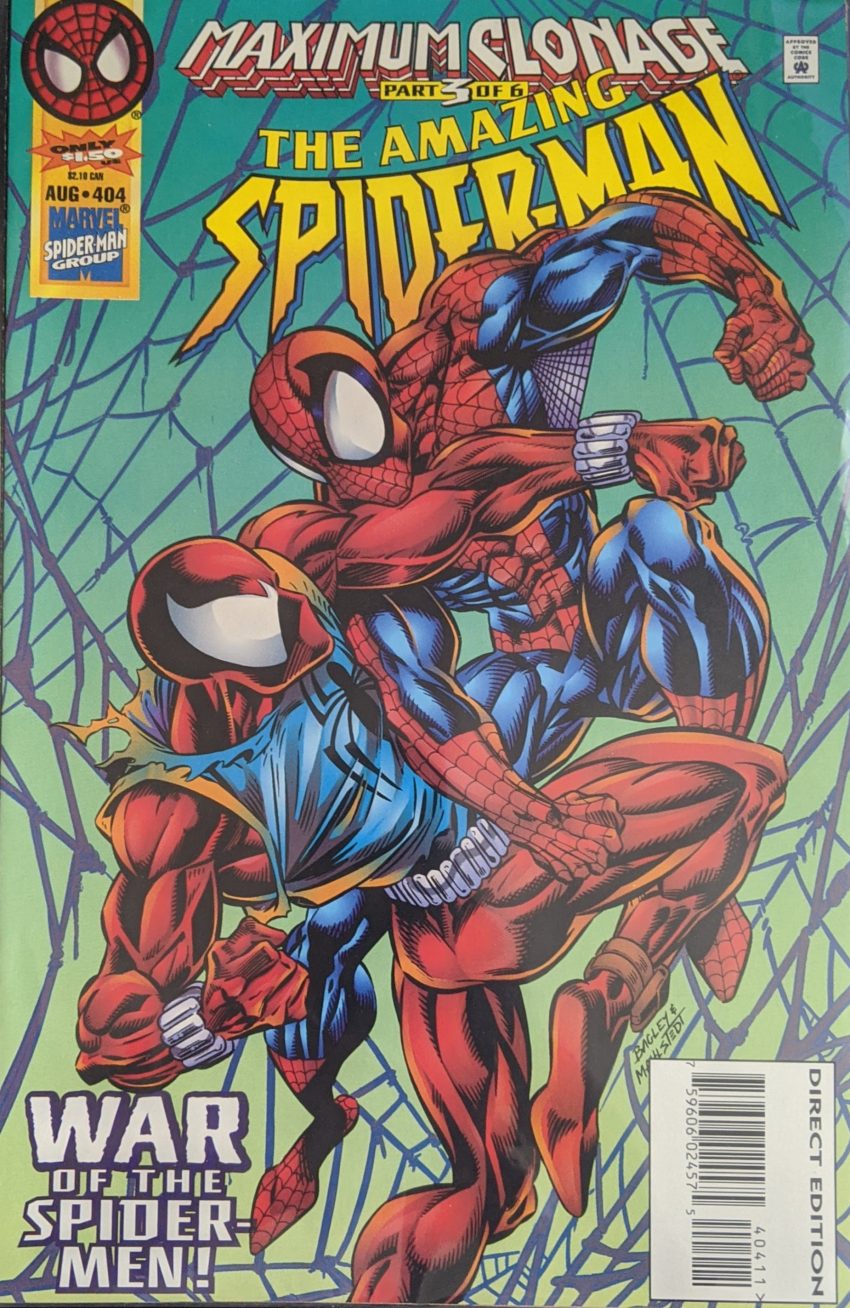 Todd DeZago scripts from a JM DeMatteis plot this month, presumably because even ol’ JM was like “This is too stupid for me.” That’s 3 parts of this terrible tripe in a row for Todd. Can he go all the way? I honestly don’t remember. Randy Emberlin & Joe Rubenstein join Larry Mahlstedt on inks. I keep reminding myself that there are so many non-clone Spider-Man comics I have left to read. This torment can’t last forever. Then I remember the next block is more Ben Reilly and I want to cry a little. Anyway! Pete Parker is being a sadsack emo mope in The Jackal’s lab because why wouldn’t he be, when someone approaches him.

What lead did you follow, Ben? PLEASE explain how you could POSSIBLY have known to come here? This story feels so crapped out.

“What did you ever have to lose?” Well, given that at this moment he’s the real Peter Parker, the last 5 years, for friggin starters, you awful, self-absorbed, wifebeating turd. Try attempting to think about literally anyone else’s perspective for once in your godforsaken, JM DeMatteis-plotted life.

Oh, good, the other one’s back. I don’t remember this story too well. Shouldn’t “Spidercide” not set off his danger sense since it’s technically him? I am actually filled with a kind of shame that I bought it in the first place. TAC 226 really shoulda been it for me. Who would I be today if I had quit Spider-Mand and maybe comics in general in 1995, like so many others did? I wonder. Spidercide beats up and nearly kills Ben while also wearing a 3rd mask design in as many appearances. And, as always, Kaine watches and internal monologues from the shadows. Then he pulls The Jackal out of his pod, saying Peter went beyond Jackal’s wildest dreams of what a clone could accomplish…

It would have been 5000000% more interesting for Kaine to be blindsided by the revelation that Ben is the real guy and have his whole worldview completely shattered, but we can’t ask Spider-Man comics for “good” or “interesting” in this period. Jackal says instead of killing Kaine, he could fix him, and Kaine immediately stops fighting. So they go to collect the others. Ben and Spidercide are still fighting, who cares, honestly, when Jackal shows and stops them.

Through some more truly wretched dialogue, Jackal says a sample of Peter’s blood will help him bring about his vision of a better world, and tells Ben he’s free to go, and that he bears Ben no grudge.

While this is all garbage, in the context of this garbage story, Ben deserves this moment of righteous anger. But…

…this is still monumentally stupid. Spidercide wandered off because he felt something calling to him, and that something is Scrier. The narration says they met in the Alpha issue, which I read yesterday, and I do not recall that happening. I just flipped back through it, Scrier 100% did not appear. What excellent storytelling! Scrier touches Sipdercide’s head and he says now he knows who he is and what he has to do. Ok, whatever. The Jackal tells Ben to just his cause of making a better world, but Ben says all he saw in Springville was death.

Funny watching the colorists play with their toys. Pointlessly and awkwardly blurring a background last issue, filling various page’s white space with an inexplicable marble texture. Seemingly just doing stuff because it’s possible. Kaine gets mad again and storms out, and Jackal just lets him go, because nothing in this story is anything. Ben has been drugged by Jackal’s claws, and he has Spidercide throw Ben in some kind of cell, all while Peter wonders why he’s going along with this. Yes, Peter, the audience is wondering that, too, what a coincidence. Then the darkness of Ben’s cell lifts to reveal the dumbest thing possible.

So our operating premise here is, not only did Jackal make a million Peter Parkers, but he also made a million Spider-Man costumes? Does he have a machine Peter might want to take home with him? Ludicrous. What’s funny to me is, I expected to be this bitter and contemptuous reading the stuff where Ben took over as Spider-Man. I hated it so much I seemingly blocked it all out (But still bought it! Still a complete moron!). But the first 6 months of that were bliss compared to this utter trash.