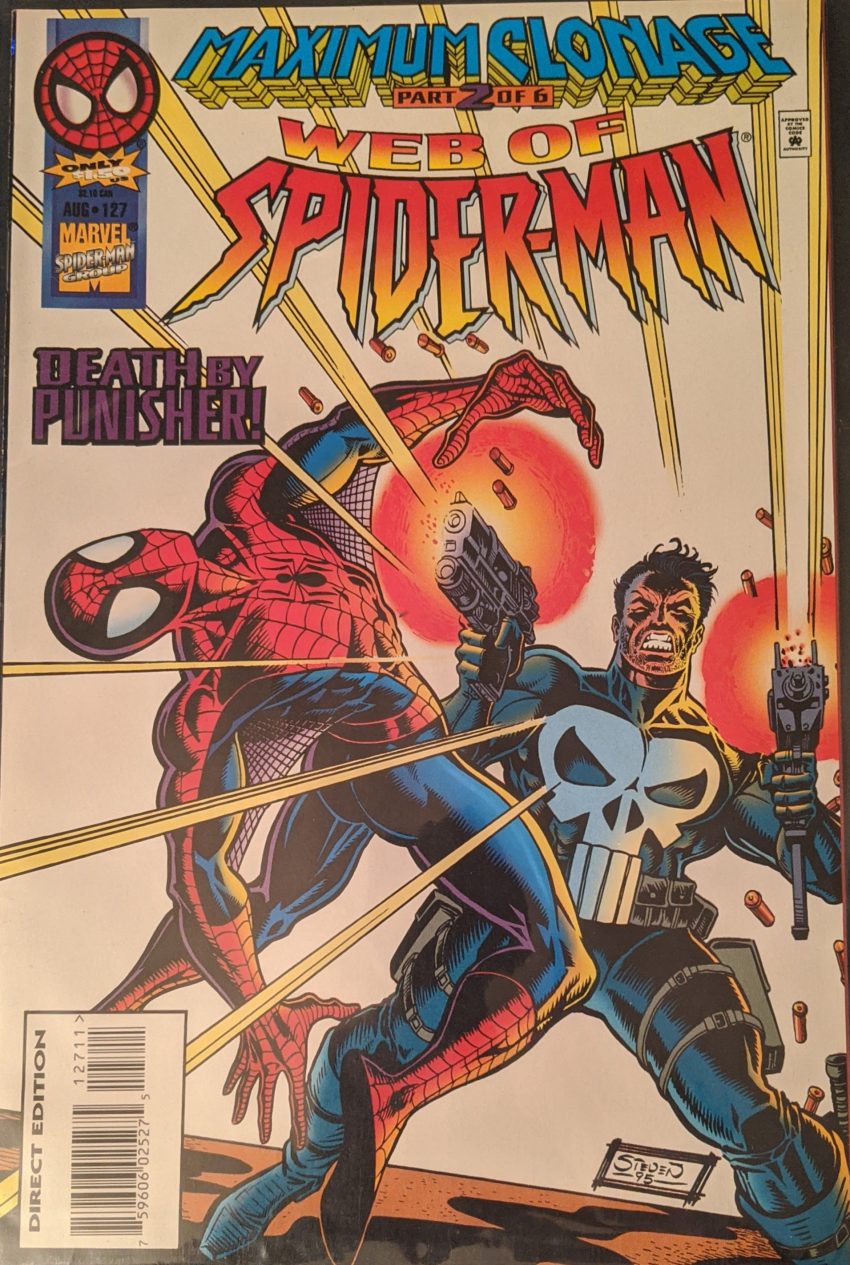 So. Picking up moments after last post, things get weird instantly on page one…

Since when does a SWAT team get mobilized just because Spider-Man is in the area? Who calls him “the bug?” This feels nothing like a Spider-Man comic. Up above them, Spidey is still holding The Jackal’s hand, which is weird, and some bad copy tells us why, and they’re being targeted.

So, yeah, there’s some stuff The Punisher would never say, ever. What is this issue? Spider sense alerting him to trouble, Spidey whirls to see the SWAT team coming. Punisher tells Spider-Man he’ll shoot Jackal through him if he has to, but of course, he’s like miles away or something, so Spider-Man doesn’t hear him. Why is he not “Punisher War Journal” narrating like he has in basically every comic for 20+ years by this point instead of saying this awful dialogue out loud?

How long has it been since I said I despise this version of The Jackal? I despise this version of The Jackal. Why are the cops treating Spider-Man like a villain??? What is happening? Jackal, sure, tho how the cops could even know who he is, I couldn’t guess, so they really shouldn’t care about either of them just hanging out on the Empire State Building. This is all nonsense. I guess this is right after Frank assassinated Nick Fury for no reason, in another example of the kind of abysmal mess comics of this era produced (Don’t worry about Nick, he was fine), so as he leaves the scene, we’re told he’s extra-unhinged and has randomly decided to get revenge on The Jackal for tricking him back in the 70s. Again, how does he even know about The Jackal? How does he know that guy is The Jackal? How did he know The Jackal would be here? Literally nothing makes sense. Meanwhile, at Aunt May’s house, MJ is visiting her Aunt Anna, who’s staying there and cleaning up since no one’s lived there in awhile. It’s been, like a week since May died, but sure, no one’s lived there in awhile.

This take on The Punisher is really vexing me. Punisher is the simplest character on Earth, how do you write him this wrong? Spidey lowers Jackal to the ground so they can walk and he can “digest what’s happening,” and also so Punisher can start shooting at them. Spidey leaps into action, and away from Jackal as Punisher seems to be firing on an innocent man on the street. But Spidey realizes too late that that was just a feint to get him away from The Jackal.

“Unless you want to get bullets on you.” Sheesh, man. Spidey attacks Frank, the cops show up, he puts Frank down and flees with The Jackal, thinking that he wasn’t totally willing to trust him, but now that Jackal took those bullets for him, he must have been telling the truth. Ugh. Spidey swings The Jackal to his lab, and Kaine watches. Now, you may be thinking Kaine still believes this is the real Peter and Ben is the clone. Because that must be what he’s thought all along, right? Because that is the only thing that makes any sense. Well, of course not. He implies he’s known the whole time, which is impossible, and that he was willing to kill people to give Peter “the life he deserved” not because he was the original, but because he was a successful clone, and everything Kaine is not. Kaine now makes zero sense. This comic is just wall-to-wall dumb. Then he has his dumb vision of the future, and this time he finally sees who kills MJ, and he’s shocked. I mean, literally who could it be other than Peter? Who could it have been the entire time? They still haven’t shown us yet, tho. Blah. Spidey gets Jackal to his lab as, back at the fight scene, The Punisher has escaped into the sewer, and the cops are after him. He’s ready to just start killing them when he notices a way out.

Who is this for? Who would want to read this? Punisher escapes the cops, and I really don’t care and don’t know why he is still here other than to fill pages.

So we just keep on truckin’ through this terrible story, which has so far gotten worse with every chapter. Can it keep up the total lack of quality? It’s 1995, of course it can!