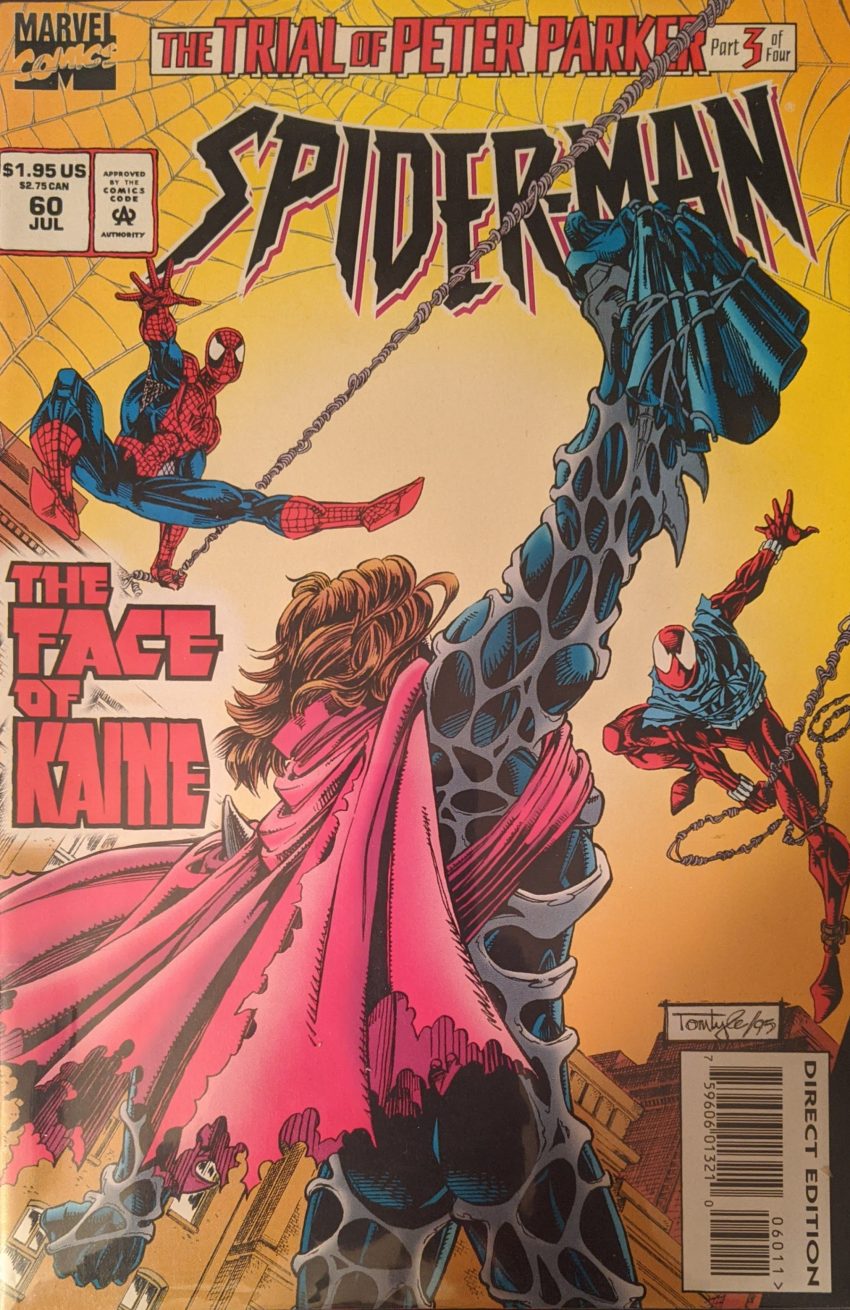 Kaine’s logo seemingly being just a random typeface is kinda disappointing. Does that font really say “Kaine?” Certainly not to me. So. He looks like he’s covered in webs. He has some kind of insect-themed mechanism on one hand. He’s got brown hair. He knows all about Peter Parker’s life and is desperate to save Mary Jane from certain death. In a story full of Peter Parker clones, who could Kaine be??? For us to find out, he’s gotta survive being choke slammed into a wall by Stunner.

Momentarily free of judgment (Where’d Raven go?), Stunner is about to kill Kaine when he distracts her by trying to “mark” her. That gives Spider-Man time to get back and break them up. Spidey tries to appeal to her better nature by saying they have to save the life of an innocent man, but Kaine says he won’t help and Stunner doesn’t care, anyway, and starts throwing industrial equipment at them,

If Kaine’s so eager for Peter to live his life, why would he force him to adopt some fake identity after “he” was executed for murder? Is that any way for his unborn child to grow up? Anyway, the building collapses on just Stunner, which is weirder, since they were all standing together and she seemed pretty aware of what was going on. Spidey tries to dig her out, Kaine refusing to help, but then she vanishes again. So now it’s just the 2 of them again.

Um… ok. Kaine has been portrayed as SO much  more powerful, and yet.. Wham. At the courthouse Tower seems to be making his closing arguments, saying Peter Parker deserves the death penalty. Spider-Man is right outside the building with Kaine, saying it’s time the world knew the truth. Then Kaine just bursts loose and says Spidey would not like the truth. I guess he could’ve been faking, but then why allow himself to be brought here? They start fighting again, smashing into the building. The judge gets word and pauses the trial, telling everyone to stay seated for their safety.

I want to know how Tom Lyle decided where to put random lines on Spider-Man’s face. IS he glowing? Metallic? Is he in light and shadow at once? This is a common thing with Lyle, and it’s very confusing.

How did he pull that mask off that way?

Spidey’s total lack of reaction at first is weird. But in the end, he’s outsmarted Kaine with his inherent sense of responsibility, and of all villains, Kaine should’ve seen this coming. Kaine is furious, but Peter is committed. He’s gonna go in there and tell the world he’s Spider-Man and that he’s been cloned at least 3 times. That would’ve been something. But as he kicks his way into the court room, Kaine at his heels, the situation changes.

Since when does he have to take the glove off??

Gotta play the hits, I guess. Well, there’s that. This whole dopey trial thing is nearly over and Kaine is revealed. You might think… especially if you happened to be me reading this as it came out… that this leaves no use for Kaine in the future. But as we’ve seen elsewhere, they just kept bringing him back. Come back next time for perhaps the single most awful, most unforgivable page in the history of Spider-Man comics. Really.