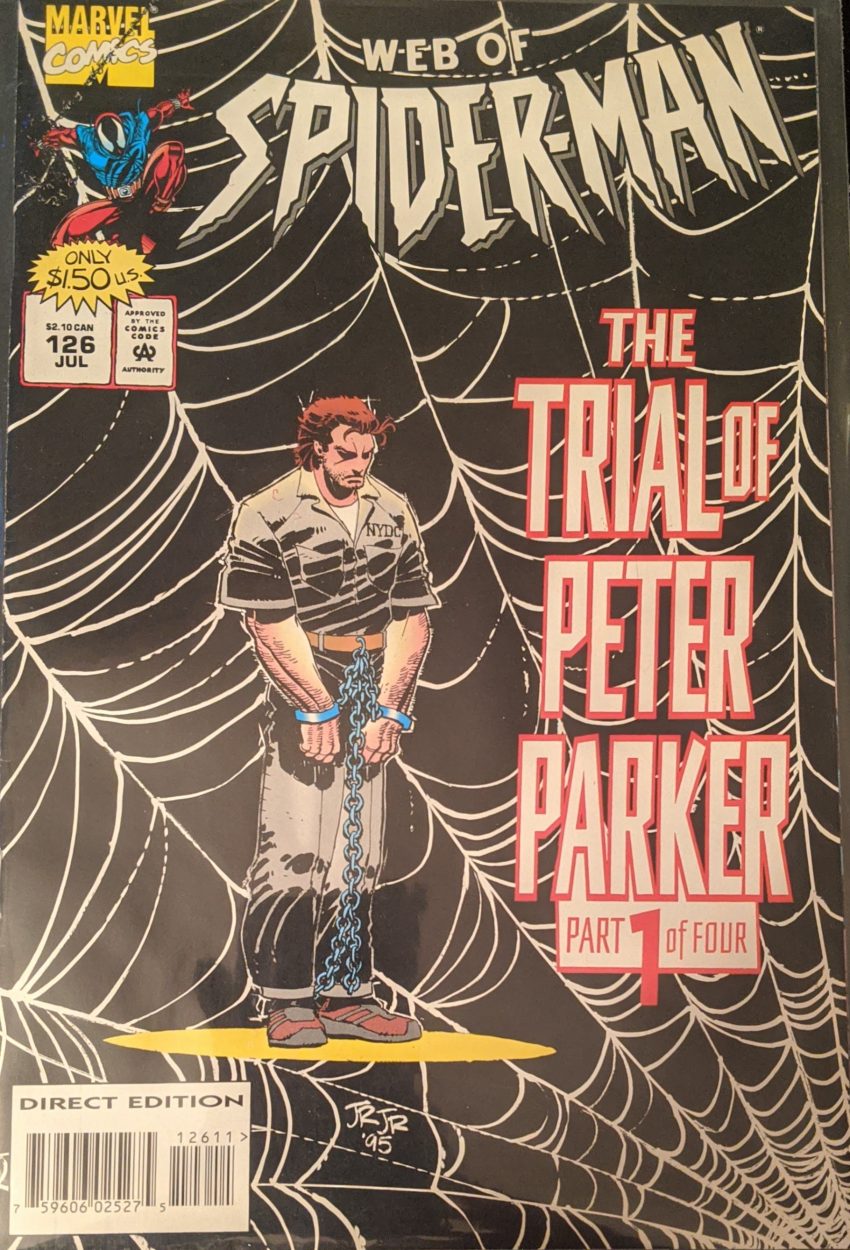 Now we’re getting somewhere. They dragged this prison thing out too long. I guess it was only 2 and a half months, but it was also 11 issues, 5 of them oversized. That’s a lot of comics. John Romita, Jr. cover. Does this mean we get him on the inside? Emphatically, as “no” as possible.

Todd McFarlane has been gone for 3 years now. Image Comics roared into the marketplace with such ferocity that they briefly unseated DC as the #2 publisher. So Marvel lost the talent that a truly bizarre, never seen before or since cult of personality evolved around, and then they became competitors. That’s a 1-2 punch. Their solution? Hire any shmoe who can kind of draw like McFarlane or Jim Lee or Rob Liefeld and hope for the best. Even if literally all they can draw is a so-so approximation of McFarlane’s Spider-Man, whatever. As a kid, this baffled me. As an adult, I think I sort of get it. Like, McFarlane’s art isn’t very good, either, really. It was wildly different, which made it seem very exciting to us early teenage boys, but it was kind of bad. Rob Liefeld was straight up terrible, but also hugely popular. Jim Lee and Erik Larsen were really the only “hot” artists who were good. Editorial had to realize this. But they sold literally millions of comics, so the lesson Marvel learned seems to have been “hire guys who draw bad, like the kids like” instead of “hire guys who draw uniquely, like the kids like.” And here we are.

Todd DeZago making his debut writing for the Spider-Office, maybe? Did he do some stuff before DeFalco took over TAC? I forgot. But Terry Kavanaugh is off the book. Terry, you may recall, proposed this clone garbage in the first place, and he’s dipped out before it’s barely begun, leaving the rest of us to be punished for his terrible idea. Roy Burdine is the penciler. Randy Emberlin & Don Hudson ink and Kevin Tinsely continues to color.

You know, this guy Burdine has noted the weird hand with the pointy index finger McFarlane sometimes drew, but that doesn’t make him McFarlane (And I should know, because I incorporated that stupid hand into my repertoire, too, and even today find myself erasing it when it slips out. Some of the biggest problems with my own work I learned desperately trying to be him). Spider-Man shoos everyone out of the dance studio and then fully turns his attention to Kaine, telling him it’s time for the confession he’s going to beat out of him. Sounding like he did in the dark times. Meanwhile, Ben Reilly is in court for the first day of Peter’s trial. DA Tower is still in office, if you can believe it, and leading the prosecution. He tells the jury it’s his job to bring criminals to justice. How does this Burdine guy draw regular people?

Honestly better than a lot of mid-90s Marvel hires. Tower seems a lot more bloodthirsty than I’ve seen him before, but, well, the 90s. Back at the studio, Spidey and Kaine are still whupping on each other.The fight veers wildly from decent to incomprehensible fight choreography from page to page. Spider-Man lets a charging Kaine dash right under him and smash into a wall, but then on the next page, Kaine is somehow recovered, and has acquired a weapon, and is somehow sneaking up behind our hero, all in the very next panel.

Spidey’s escape attempt fails and Kaine somehow grabs the web from some distance away even though they were right next to each other, then keeps slamming him into walls telling him “Reilly will fall” and it’ll happen over Spider-Man’s broken body if it has to. Elsewhere, a very poorly drawn Jacob Raven and a surprisingly well-drawn Stunner hear about the fight on the police band, and head out to get Kaine. Raven wants him brought in to stand trial, Stunner wants to kill him. Meanwhile, Peter’s lawyer, who I believe has yet to be named (?) begins his own opening statements, telling the jury they have to make sure Tower hasn’t gotten the wrong man.

Bit weird. This guy Burdine isn’t ready for prime time, but unlike a lot of artists hired in this period, I couldn’t have done better at the time. (I like to think I do better now).  Back at the fight, the arrival of some beat cop who’s made a huge mistake gives Spider-Man a chance to collect himself and get back at it. Some really atrocious dialogue as the 2 combatants get back to beating each other up. And suddenly Spider-Man, who’s been on the defensive the whole time and was nearly beaten to death a second ago, is handily defeating Kaine like it’s nothing.

As Spidey keeps beating up Kaine, a much, much more poorly drawn Stunner shows up, telling Spidey to move so she can kill Kaine with her bare hands. Raven is not into that, but she doesn’t care, obviously. Then someone teleports into the alley, interrupting everyone, but we cut away for a sec before seeing who.

Ugh, can’t this guy go away for five minutes? And as that caption says, next issue is going to be weird. But at least it will be drawn by a professional.