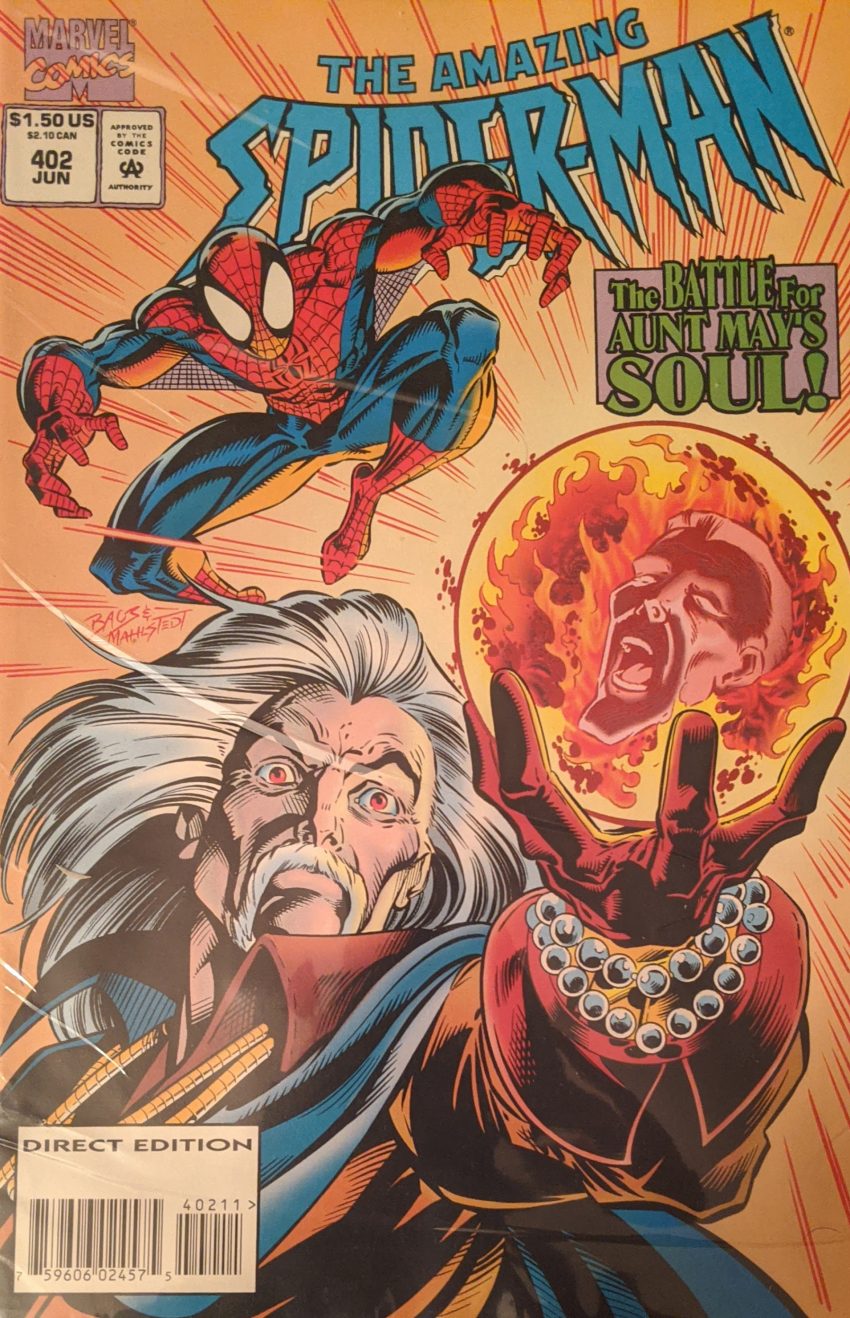 Can you imagine picking up this comic and not just putting it right back down and quitting on the spot? This promises perhaps the least-Spider-Man Spider-Man story possible (Until the absolute least in 2007). This cover should advertise to anyone who sees it “We’re all the way off track, try back in a few years.” But here I am, still buying this crap. It is 1995. I am 17 years old. Spider-Man comics have been uniformly terrible since 1993, at the latest. I should have better things to do with my time and limited funds than be disappointed by terrible Spider-Man comics. But I couldn’t let go. I literally bought every issue thinking “Maybe this is the one where it starts to get better.” And it never did! It got slightly better in like 1998, and then worse again, and then way worse, and didn’t really get better until 2001. Dark, dark times for comics in general and Spider-Man in particular. Anyway. Let’s get on with it. Still in the Scarlet Spider suit, Peter goes to the hotel our “Jacob Raven” is staying at to tell him he’s got the wrong man when he sees “The Mark of Kaine” on his face and is shocked speechless.

Again, does the physical and temporal impossibility of Peter committing these crimes not matter at all to this guy? What an idiot. “He literally couldn’t have done it, and some other guy did this to my face, but I’m not totally sure he’s innocent. I still think literally dozens of New Yorkers are conspiring to say he was here the whole time, and that The Daily Bugle put his name on photos taken locally because they’re in on it, too. This might go all the way to the top!” Peter swings away, recapping why he’s in this suit and whatnot, and then Judas Traveller takes over narration.

Whatever, dude! Scrier shows up so they can have a typically cryptic and pointless conversation, Scrier saying what Traveller has planned for Peter could break him, Traveller saying it would be worth it if it helps him on his quest as he turns into a bird and flies away. This guy literally could not be any less of a Spider-Man villain. He sucks so bad. Meanwhile, our guy has made it home.

Fair points from MJ. Then she shows him the real reason she’s so upset, the test results saying their child could face complications due to radiation. Peter is horrified, but at least he doesn’t start destroying their living room like he would have only a few issues ago.

Bleh. Traveller says he’s been wondering since Ravencroft if Spider-Man is the light balancing the darkness of his enemies, or the catalyst that makes them all want to become weirdo monsters to begin with, and says they’ll find out as they “journey across the landscape of his soul.” Peter responds to this with quick and brutal attacks, but…

Bllllleeeh. Traveller stabs Peter with a sword that he materializes, babbling about the extents of heroism and wonder what Peter’s limits are. There is no wound, of course, because this is all in Peter’s mind. Then we get to the nonsense promised on the cover.

I would say “Sir, this is a Spider-Man comic. Shouldn’t you be bothering Dr. Strange?”

It seems utterly bonkers, but this isn’t the last time Peter will be presented a metaphysical no-win situation for the life of Aunt May. Really.

Peter realizes he’s in control if this is his mind and whups Traveller, causing him to vanish and reappear. He says “I’m not god — but I’m close,” which is so silly, then claims to be showing Peter the future. The future is a Manhattan that looks like Godzilla just walked through it, in a 2-page spread that wouldn’t photograph well, and he says Peter will cause all this soon out of love. Egads. How shocking. Whatever will Peter do now? Who could possibly care? But we’ll find out next post.