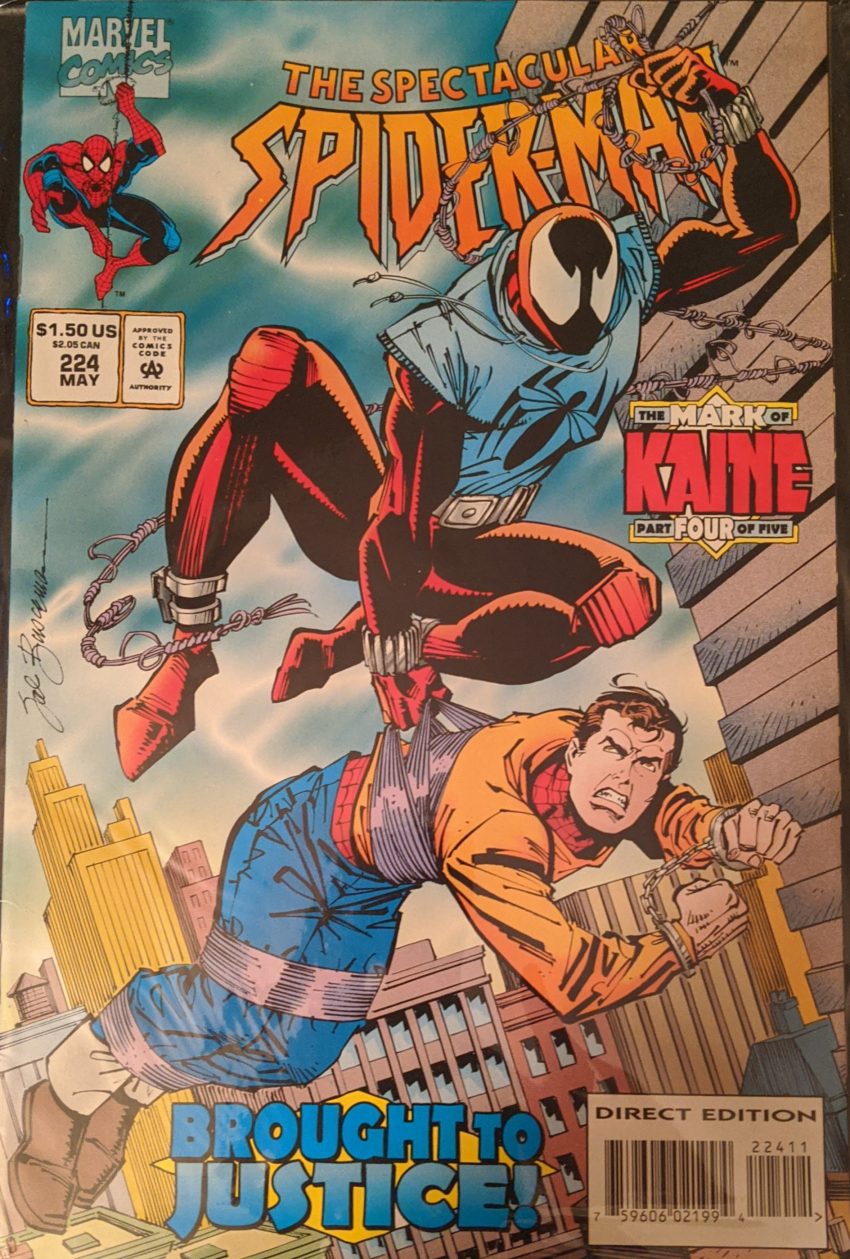 Certainly an intentional echo of ASM 39 there. I like that whoever colored this cover got to the text at the bottom and was like “Yeah, pants blue and sweater blue, done.” This is page one:

The art team really came out swingin’. It kinda does feel like years since he hatched out of his pod way back in block 15. Been almost a year, in fact, since that issue posted. Oh, he stands revealed as “The Assassin With My Face!,” the title of this issue. As Peter #3 continues to morph and get weird, this book is very lucky to have Bill Sienkiewicz on board to make it as weird and gross as it should be. Kaine says that thing is genetically engineered to kill MJ, but he’s gonna kill it first.

I know these 2 hate each other, but if they’re both committed to helping MJ, maybe they could put it on pause for a sec here? Peter #3 is now Hulk-sized and still growing, the webbing mysteriously gone from his Spider-Suit, raving about how he’s the real Peter and The Jackal did something to his DNA. Who would believe this? Cut to Traveller and Scrier at the prison, waiting for Peter to come back, Trav talking about how he’s too noble not to. Then, back to the sewers.

Kaine smashes a huge section of the roof of the tunnel down on “Freakface,” which they have both agreed to start calling this guy, but he pops up out of it, bigger than ever and now webbed again for some reason. Nearby, Pete & MJ reach the surface, but they’re both still worried about Ben. Kaine tries to “mark” the big weirdo, but it starts stretching like Reed Richards and wraps him up until Ben kicks it in the side, and they run for it. Up top, MJ tells Peter to go back like he wants to and help, that she can get home on her own.She tells him she doesn’t know when she’ll see him again due to “this prison thing,” but they have a firm date to live happily ever after, and she intends to keep it. Showing their hand a bit there. Nearby, Ben & kaine burst up out of the ground with “freakface” on their tail, but Player 4 has entered the game.

This is the 2nd time in 3 pages someone has said “risking his/your fool neck.” Such hip dialogue. The big guy chucks a car at Peter, who dodges, and Ben thinks he’s insane to be risking his neck when he has a family at home, again trying to guide you into that way of thinking. When the big guy prepares to through a fuel truck, Kaine throws a car into it first, causing a massive explosion in the grand Sal Buscema tradition. Peter sees Kaine on the end of the enormous fire left in the wake of the explosion, and is puzzled as he just walks into that fire. But before he can think about it too much…

Well, that’s convenient. But there’s still one more chapter in this story, so who knows what could happen? I don’t, because I’ve never read this next issue!