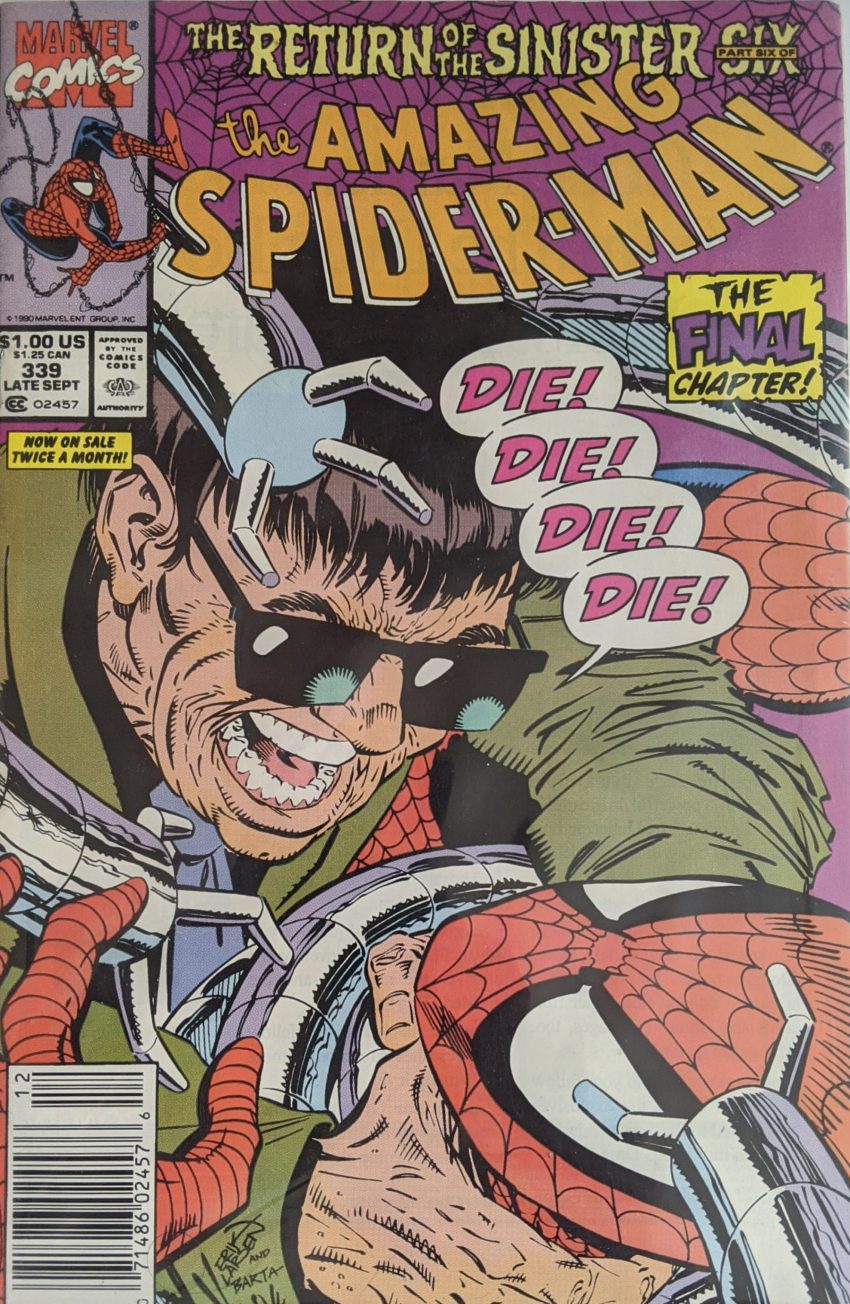 Sometimes the covers of comics in the 90s made it challenging to bring them home. My folks were largely hands off with this dumb hobby, but “DIE DIE DIE DIE” isn’t really a sentiment that would’ve been welcomed in my home. That endlessly rotating inker slot gets real crowded here in the home stretch, with contributions by Randy Emberlin, Mick Machlan, Keith Williams and even John Romita! Plus Greg Wright & Mike Rockwitz pitch in to help Bob Sharen on colors. This twice-a-month schedule always leads to deadline problems. As we get rolling, 4 of the Sinister Six are standing around Spider-Man, wondering why he’s not dead.

That is BANANAS. I totally forgot what the “poison” actually did. I remembered the swerve, but not what it was. Holy crap. The premise here is that rich people will do anything to STAY addicted to cocaine???? WHAT? DOCTOR OCTOPUS CURED COCAINE ADDICTION! AND somehow found out some brand-new fakey substance would reverse his process in spite of no one, including him, having worked with it before. This is aaaaaaall the way off the rails. I wonder if I just bought this as a child. I probably did. But WOW. Whew, ok, uh, so the villains flee and Spider-Man is kept buy by Ock throwing his glass gun in the Long Island Sound, saying it can fix Sandman if Spidey can find it. He manages to get tracers on both the gun and the fleeing Ock, then goes diving for the gun. Soon, Sandman’s ok, and Spidey assures the cops they were working together to stop the others as he hangs around to explain what just happened.

Uh-oh! Michelinie is getting really goofy with the captions here lately. Is that MJ’s walkin’ around outfit? Sheesh. Things ramp up fast from here. Doc Swan tells Peter they’ve anayalized Doc Ock’s cure and discovered it is “dissolving the Ozone Layer faster than all the aerosol cans in the world!” Remember the Ozone Layer? So they have to come up with a solution, and Peter just… sits down at a computer and does. Some indeterminate period of time later, he’s reviewed all the research on Burundite and discovered if it’s “put in direct contact with Ock’s cure,” it will deactivate it. Ooooooohkaaaaaay. But that means he’s gotta go get the Burundite (Which, we must remember, is a rock about the size of someone’s head? Not a lot of it) from Ock. And also:

Won’t he be surprised to learn he’s brought a knife to a gun fight. In New Jersey, Spider-Man is delivered to Doc Ock’s hideout by a police helicopter. Peter told them he called The Avengers to get Spider-Man, but he really called Sandman to get the location of this place. The cops offer to go in, but he says they’d trip all the alarms and has to go alone. And also:

I didn’t say WHOSE gun. Two stalkers at once is too many! Spidey just tells Ock the problem, but he doesn’t believe it, of course. Once again, Larsen renders Ock’s tentacles as an impenetrable web of metal mayhem. This could really be the root of why I think of him as so formidable. He routinely keeps Spider-Man busy without even looking when Larsen is drawing, and that’s pretty cool. Unable to get through the arms, Spidey backs off, chucks a giant piece of machinery at Oc, and tries to slip past the arms while they’re busy.

Every good Doc Ock story has involved him being aaaaaaalmost more than Spidey can handle, but this really cranks it up, and I’m all for it.

I mean, this is pretty ridiculous. Saved from stalker #1 by stalker #2 and right back where she started. In New Jersey, a stunned Doc Ock slowly regains his bearings, sees Spidey ignoring him completely to save the Burundite from the fire, and finally believes him about the Ozone Layer.

Well, ok. That’s it for Jonathan Caesar, at least. Too many stalkers. MJ getting to save herself is nice, but there need to be other plots for her. Sadly, it’s really all downhill from here. Say, this issue hasn’t had a cameo from another superhero yet.

Thor tosses the original satellite out into space and then activates the new one. Hours of waiting later, the scientists, Spidey & Thor get the news that it’s working. Everyone’s happy, but Spider-Man can’t help but think that a terrible social problem was almost solved.

And that’s the game. To his credit, I can’t tell which pages John Romita inked. He didn’t “fix” any of the faces or anything, as he would’ve done in a previous era. For better or worse, the future Image artists have put the last nail in the coffin of the Marvel “house style.” Anything goes from now on, and soon that will be true at DC, too. We’ve seen some of the grim effects of this in the mid & late 90s blocks. And speaking of which, our next post takes us back to the mid-90s, to the aftermath of Aunt May’s death. Join us for more crying next time!