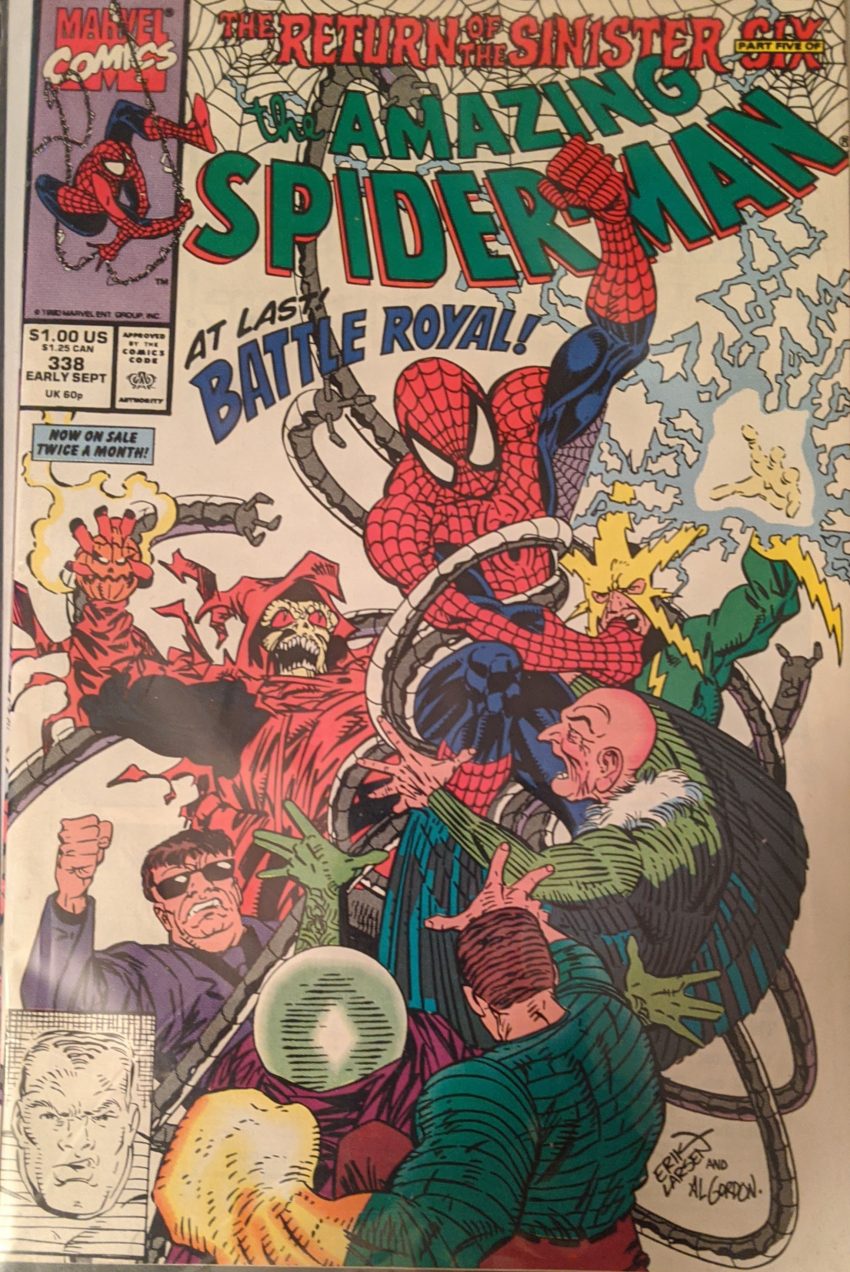 At last, indeed. A 6 part story called Return of the Sinister Six where they don’t do anything together ‘til part 4 seems a bit odd. But, then, what would Spidey do against 6 of his most dangerous enemies at once for 6 issues? Mike Machlan is back to inks for this one, as The Sinister Six look at the prep for the satellite launch from some kinda submarine of Doc Ock’s. Sandman is even more uncomfortable with his threat to poison the Earth, but he’s still being kept in line by the threat to the family he lives with.

I often wonder about the webbing on Spidey. Sometimes it seems like inkers might fill that in and pencilers didn’t, other times the penciler clearly did it. For this whole sequence, Spidey’s blue is all black, and his web pattern is back to the classic, less dense look. But as he approaches Aunt May’s house to see how she’s holding up, it’s back to post-McFarlane density. And I’ve noticed throughout this story that smaller drawings of Spidey have less webbing, even though all kinds of inkers have worked on it. Curious. Anyway.

Love a good Peter & Aunt May moment, and the economy of it is pretty impressive. One page to sell a lovely little emotional moment between them.

Reed on the TV there is all the cameo this issue’s got room for, but they got it in. Peter tells MJ what happened, and she suspects Jonathan Caesar (That took long enough). Peter isn’t so sure, but can’t talk her out of it. Meanwhile, at their hideout in New Jersey, The Sinister Six waits as Doc Ock finalizes the canisters of poison for the satellite. He impresses upon them how incredibly dangerous it is, prompting Hobgoblin to casually stuff a vial in his purse for later. Chekov’s Vial of Poison? The next morning, Pete & MJ split up to go about their business, but MJ doesn’t tell her husband she’s on her way to buy a gun. And not irrationally…

Good times. At the launch site, Peter is feeling extremely proud, but, um, why? He didn’t seem at all involved in this other than knowing the people doing it. Ah, well, doesn’t matter, because The Sinister Six make their move. The flyers sow confusion with bombs while the others come in in that tank thing they stole. Mysterio, Hobgoblin & Vulture are tasked with dealing with security forces, Electro with disrupting communications, and Sandman is to be Ock’s bodyguard as he takes the poison to the satellite. Which is a decent stab at making it seem like Ock really needed them all for this, but did he, really? I feel like he’s pulled bigger stunts with just the ol’ army of goons. But it’s good enough, and it sets up only the 2nd ever showdown between Spider-Man and The Sinister Six.

Even in a comic from 1990, I can’t escape being made to think of our idiot president. Weird that Mysterio’s monster is colored like Hobgoblin. Those were the last guards between Ock and the satellite, and he leaves Sandman to stand guard as he takes his poison in. Nearby, Spidey uses the other 3’s powers against them, webbing Hobgoblin’s glider and smashing him into the ground, then whipping it back around to throw at Vulture. He dodges it, but Electro doesn’t, and the wild zap he tosses as he gets hit takes out Vultch. That really worked out! Spidey reaches the launchpad in time to hear Doc talking about poison, but then Mysterio is on him, and now his mists dissolve Spidey’s web (Did that just happen?), so he’s in trouble.

A big hero moment for Sandman, but Ock just produces a tiny gun and demonstrates that it fires a beam that hardens him from sand to glass. Then he orders to the others to break him as he heads for mission control. Spidey now has to defend Sandman, and can’t follow Ock as he heads to the control room. No one will do as he says, so he kills a guy, and that prompts a lady to begin launch for him. With Spidey and the other villains right as the base of the launchpad.

Sad thing for Spidey to die like that. Show’s over, folks. Come back next issue for the funeral of Spider-Man.