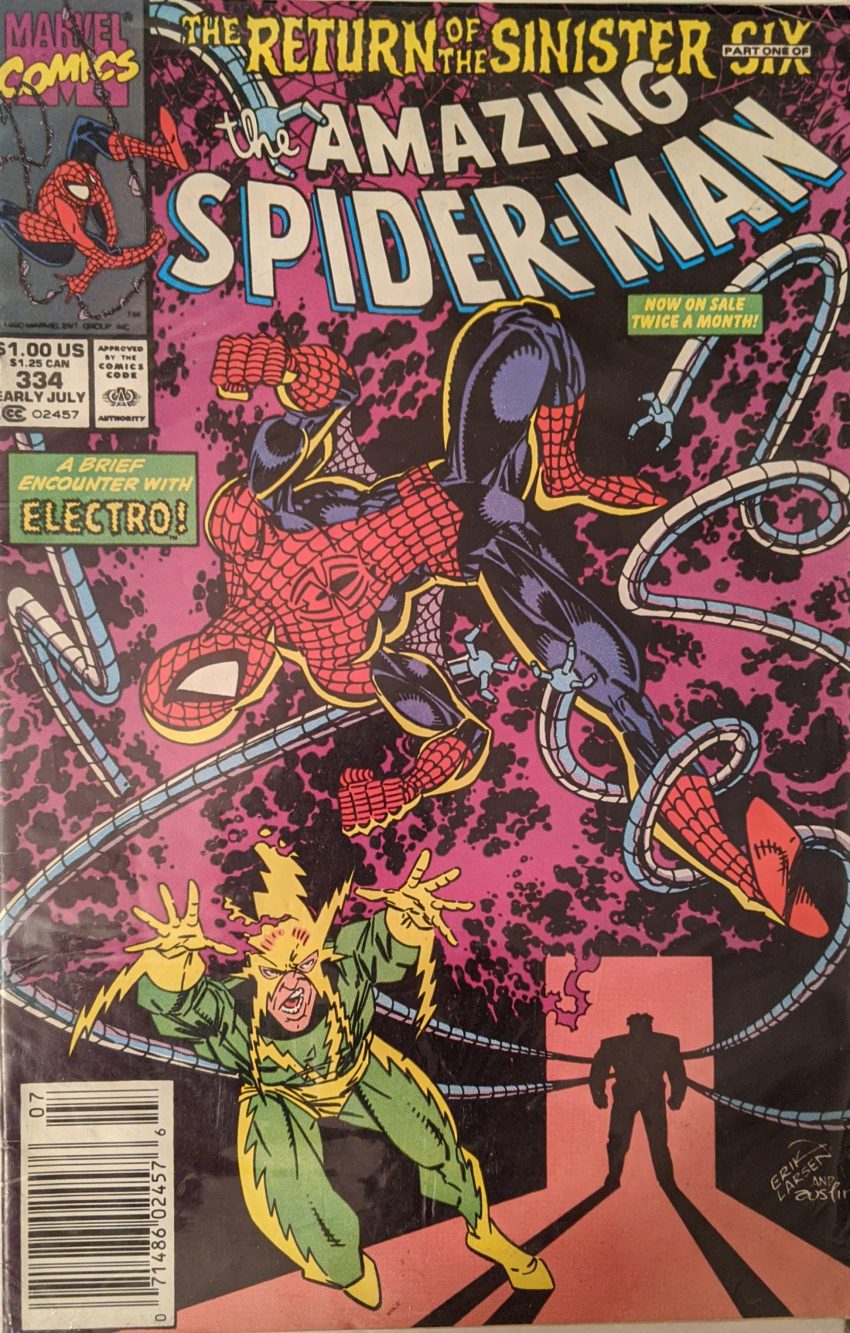 With this issue, ASM is once again on sale twice monthly for the summer, so they can burn through this big story in only 3 months. Until recently, I had 2 copies of this issue. Not sure how that happened. Real waste of a dollar back when I didn’t have any to waste. I also recall not managing to collect this whole story as it came out. I missed one or two and found them not long after. Maybe I forgot which issues I missed and bought an extra copy by accident. That… sounds like me, sadly. Weird choice having the electro blasts be that color. Maybe I should get on with this. Mike Machlan inks this one. It’s been so long since I saw 333 I don’t remember if he inked that one. The splash page is Electro racing towards a destination…

Spidey’s one-step-removed-from-Bugs-Bunny dialogue there is so what I think of when I think of his in combat babbling. I feel like that’s Stan Lee’s Spidey, that’s Roger Stern’s Spidey, anyone who nails it has him kind of channeling Bugs. They keep at it, but just as Electro might be getting the upper hand, tentacles burst in, just like on the cover.

I believe this is the debut of Ock in a suit. I don’t know whose idea it was, but I associate it with Erik Larsen, and man, do I appreciate it. Why they ever stopped having him in a suit is beyond me, it’s the perfect solution. And I love that he’s totally hemmed up Spidey while he chats with Electro. THAT is Doc Ock. Incredibly formidable. Ock smashes a hole in the roof, revealing a flying machine up there, then smashes a wall so it’ll fall on the guard, making sure Spidey is occupied, and the villains depart. Spider-Man is understandably worried about this turn of events. The next day, he’s at grad school with Doc Swan and Anne-Marie, who we’ve not seen much of lately. They’re describing how they plan to launch a satellite to help the map the magnetic ley lines of the Earth as a potential fuel source. Well, I’m sure nothing can go wrong with that now that it’s gotten some exposition. They’re doing this in partnership with a Stark Industries subsidiary.

A+ bit. Meanwhile, MJ is filming her soap when she flubs a line and her director blows up at her. A co-star fills her on in how that guy’s usually ok, but his wife is an alcoholic and he’s stressed. He tells an assistant to send MJ some flowers as an apology before a giant light falls on him. It doesn’t kill him, but it obviously messes him up, and then the crew discovers the safety line was cut. Dun dun dun… MJ is pretty shaken up, but she & Peter go to see May & Nathan as planned, anyway.

Peter follows Nathan to a bank (Again… Why has this happened more than once in the last 20 issues?), and when he comes out, he is assailed by some goons. But, of course, he has a guardian spider.

Time was, Nathan woulda hit that guy himself, but David Michelinie clearly has a different take on the character than Roger Stern did. Spidey swings away thinking he’s been too hard on Nathan (Uh, yeah), Nathan gets home safe, and Peter carefully trails in behind him. But he’s still worried about what Nate is doing with all that cash. Meanwhile, Sylverster Mann, aka William Baker, aka Flint Marko, aka The Sandman (Why so many names???) gets a visit from an old friend.

Sandman’s new status as a good guy easily handled and we’re off. Strong start to this story. And my first exposures to Doc Ock, Electro, and Sandman, as a kid. This story was a real crash course in Spidey villain history. But who will be the new recruit? What with Kraven dead and all. The answer may surprise you.