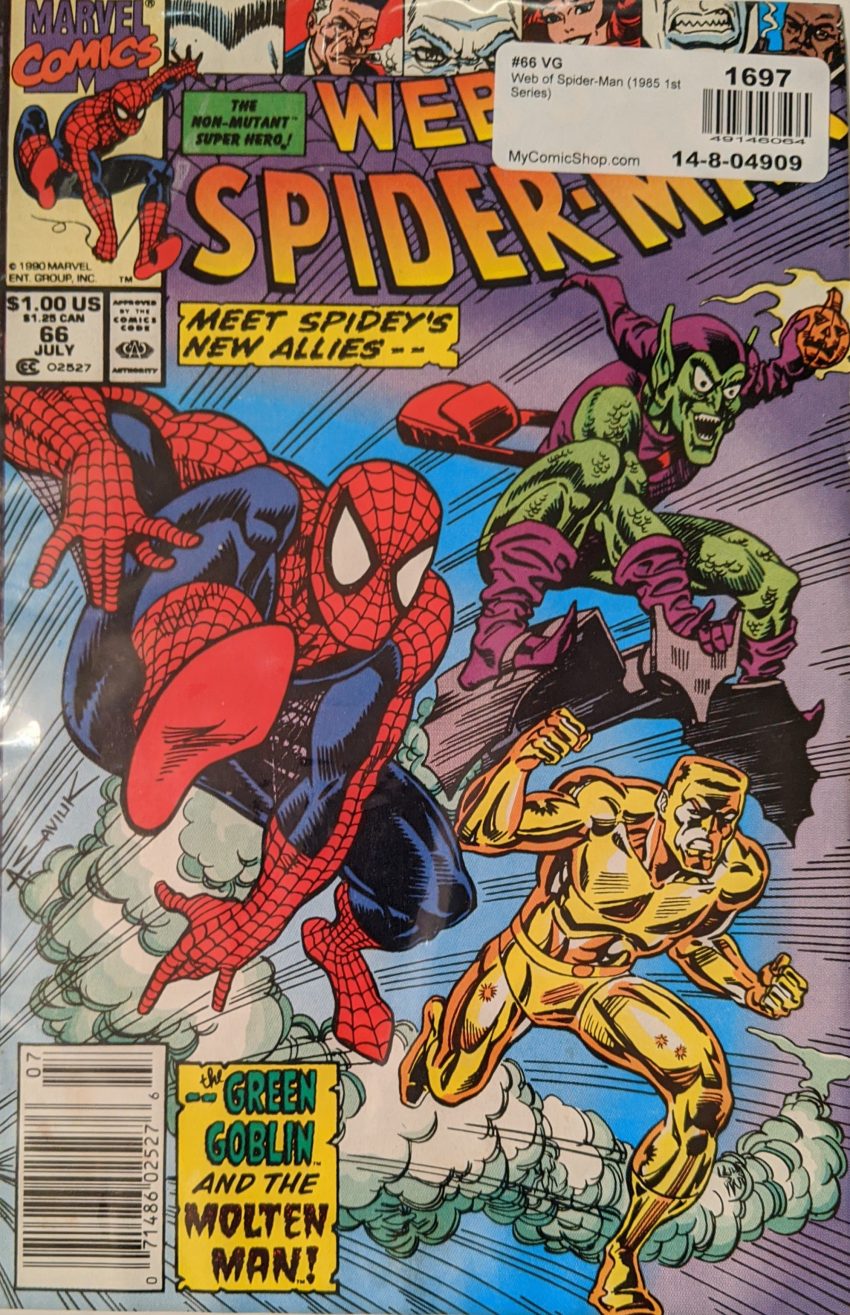 Boy, it feels like forever since Mark Raxton came back to the book with all these other shenanigans going on. Tombstone filling 3 of the boxes up there is funny. Page one is Robbie furious with JJJ for a cover story on “The Jameson Digest” showing Spider-Man having defeated Goliath with the caption “Would you trust this man with your city?”

I mean, come on, Robbie. Yeah, you could argue Peter may have faked photos of Spider-Man before (As if you didn’t know the truth), but how many photos of Spider-Man has he ever delivered wherein Spider-Man wasn’t doing something a regular person couldn’t do? Almost every photo we’ve ever seen Peter submit was an action shot. Even this, could Peter have put on his Spidey suit and climbed atop Goliath’s unconscious body (If he weren’t Spider-Man, of course)? This plot feels undercooked. Peter chases Robbie into the elevator to try to talk to him, while MJ, who was supposed to have lunch with JJJ & Peter, finds herself without plans until Betty Brant shows up.

Setting up a faux Daily Bugle with all the old characters and leaving the newer ones at the real Bugle with Fireheart seems a weird move, especially since the Puma story can’t last forever. A lot to dig out of later. Aaaannyway, Mark lets the comments go, but then a limo with Tombstone in it pulls up. As The Green Goblin watches, Mark is made to get in the car.

Uh-oh. We cut to MJ & Betty at lunch, where MJ asks if Betty would’ve wanted people to intervene sooner when she was going crazy at the top of the Michelinie era, and she says “yes” in a round about way. When she asks who MJ is worried about, she says she can’t say because she hasn’t even told Peter. Mystery! Then…

It is so interesting watching the other guys try to do the McFarlane Spider-Man. Sal has been doing this since the 60s, I can’t imagine he’s too into it, and while Alex hasn’t been in the game so long, he’s got an obvious devotion to Romita, Sr. that comes through in every panel, and now he’s gotta do this weird Spider-Man that’s always surrounded by a cloud of webs and stuff. But, you gotta give the kids what they want. Joe is being approached by a guy he was in prison with, who says he can give him Tombstone “wrapped up and ready for the cops” for a price. I guess by Joe’s reaction that this is meant to be a test of his tuff new ethics, though I fail to see how. Meanwhile, Spider-Man arrives at the building he lives in, where his Spider Sense is set off by Mark Raxton, even though he poses no threat, because he’s looking for help. I give up on Conway & the Spider Sense.

Well, that’s nice. These 2 have been through some pretty brutal fights, and look at them now. I like a good redemption story (As long as it’s not, say, making Dr. Octopus a hero in a cloned Peter Parker body, but that’s 2010s talk). Later, at the Parker household, MJ has just told Peter she saw Harry’s Green Goblin gear while babysitting, which I genuinely forgot about already. They’re worried and they don’t know what to do, so they make the unusual-for-comics choice to just go ask what’s going on.

Not putting The Green Goblin on the cover of this issue described as “Spidey’s ally” would’ve really helped this story. Later that night, Tombstone and his boys pull up to Osborn Chemical, and Raxton is waiting for them. He hops on their truck and tells them he’ll take them to where the chemical is. But Joe Robertson is also there, tipped by his snitch. He decides not to call the cops just yet.

I mean, the last time Harry used the suit, he used it for good, so the pretense was already kinda thin, but at least not announcing this “twist” on the cover would’ve helped. But look!

The switch Tomby hit locks him in a chamber that begins filling with gas, while outside, SPidey asks Harry what he’s doing, and he says helping, obviously. He’s got you there. And the 3 heroes are just about done taking out Tombstone’s goons(tones), in spite of Harry’s serious lack of experience in this area The Goblin explains “his friend Harry” asked him to keep an eye on the place, but then Spidey’s danger sense let’s him know he should check on Tombstone. He finds a panicking Joe Robertson outside the chamber trying to open it.

Can the already murderous and superstrong Tombstone get any worse? We shall see.