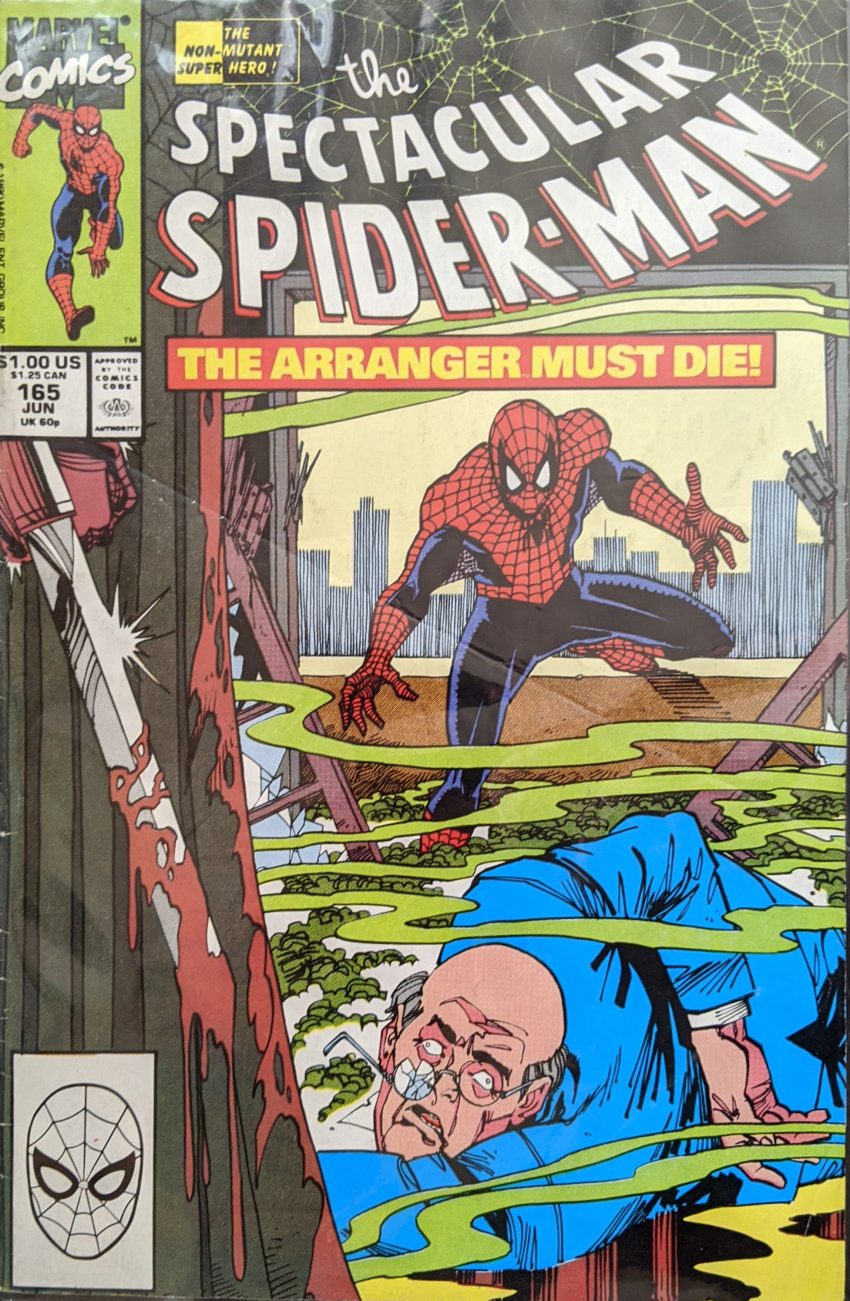 Say, a regular comic. Feels like it’s been a long time. Maybe The Arranger wishes it had been longer. Today’s adventure, with line art by Sal Buscema “and friends” and colors by Renee Witterstatter and “Dell’Orto,” no first name given, begins in London, on a foggy night, as a mobster runs in terror.

Wow, a person named Fogg… who turns into fog(g).

Corr blimey and other such cliches! After killing that dude, Knight & Fogg here instantly switch to normal clothes and go have a drink. “Knight” is tired of killing his friends, and he’s in luck, because “Fogg” says their boss is loaning them to a guy in the US, and it’s something to do with Spider-Man. Speaking of whom, he’s swinging across town in a Buscema signature pose to reach The Arranger, who left a message for him care of Peter Parker at “the temporary offices of The Daily Bugle,” and who is obviously terrified and tells him he thinks Kingpin wants him dead.

Kinda spotlights how Kingpin’s role has changed over the decades. In the 60s & 70s, he certainly would just try to beat Spider-Man to death, but now he’s got guys for that. Spider-Man swings away, thinking he’s just avoided a setup (I feel like he’s seen enough to know better, but whatever). He’s meeting Mary Jane for dinner at JJJ’s. That’s pretty unusual.

You know, this isn’t something I would’ve known before 2018, but this is the 2nd time they’ve created a rift between Peter & Robbie in just a few years. Why? First Robbie was telling him his photos are bad and he should quit, and now this. It’s weird. Not as weird as Peter being dressed like he was on the 60s TV show here, but weird. While he a& one of his oldest friends trade insults, The Arranger is so desperate he’s begging Hammerhead & Chameleon for help by phone as the signature green fog(g) of Fogg appears outside. So he calls… The Jameson household, because he knows they’re having dinner tonight (“I pay people to know these things” Reeeeally?) and demands to talk to Peter about a matter of life & death. Elsewhere in the apartment, Robbie is rehashing the whole Tombstone storyline.

Here’s the thing: It has been super obvious Joe knows Peter is Spider-Man so many times over the years. This same thing could’ve been a way to bring that to the surface and create a more complex and unique situation between them instead of this dumb fight. At any rate, while The Arranger begs Peter to get Spider-Man, Fogg finally comes through the window. It must’ve been several minutes. Maybe he likes the drama. Peter hears the chaos, realizes he was wrong and runs out of the party.

He shall arrange— no more! Fogg gets the drop on Spidey due to his weird powers, but Knight tells him their contract said they only kill Spider-Man if he gets in the way, which he didn’t, so fighting him would be meaningless. He says this as he tosses Spidey out the window. But Fogg just really likes killing people, so he follows after him.

Ouch! Cops arrive with comical speed, and a barely conscious Spider-Man tells them The Arranger has been killed and he’s going after the killers. But he’s pretty messed up and doesn’t know much about his foes, and they use both against him ‘til the cops come and they decide to leave.

Just up and headin’ to London. How does he afford his jetset lifestyle? I am interested to note Buscema explicitly drawing John Romita, Jr.’s Kingpin on that last page, no doubt about it. Not copying him, just using his take, since he’s the current DD artist, one assumes. How is “Oswald P. Silkworth” know to that reporter as “The Arranger” if Kingpin is able to pretend he’s a legit businessman? Surely people know he works for Kingpin. That whole thing is weird to me. Not as weird as this letter, tho:

Was this a lame attempt to create a new villain or something? I dunno. The letter col also lets us know Sal was feeling sick, so Stan Drake, Andy Mushynsky, Jack Abel, Mike Manley, Tom Morgan, Al Milgrom AND Keith Williams all provided finishes over his breakdowns this month. Ol’ Sal is such a workhorse. He never missed an issue. Even tho he only did breakdowns this month, his hand is unmistakable on every page, and all while sick.