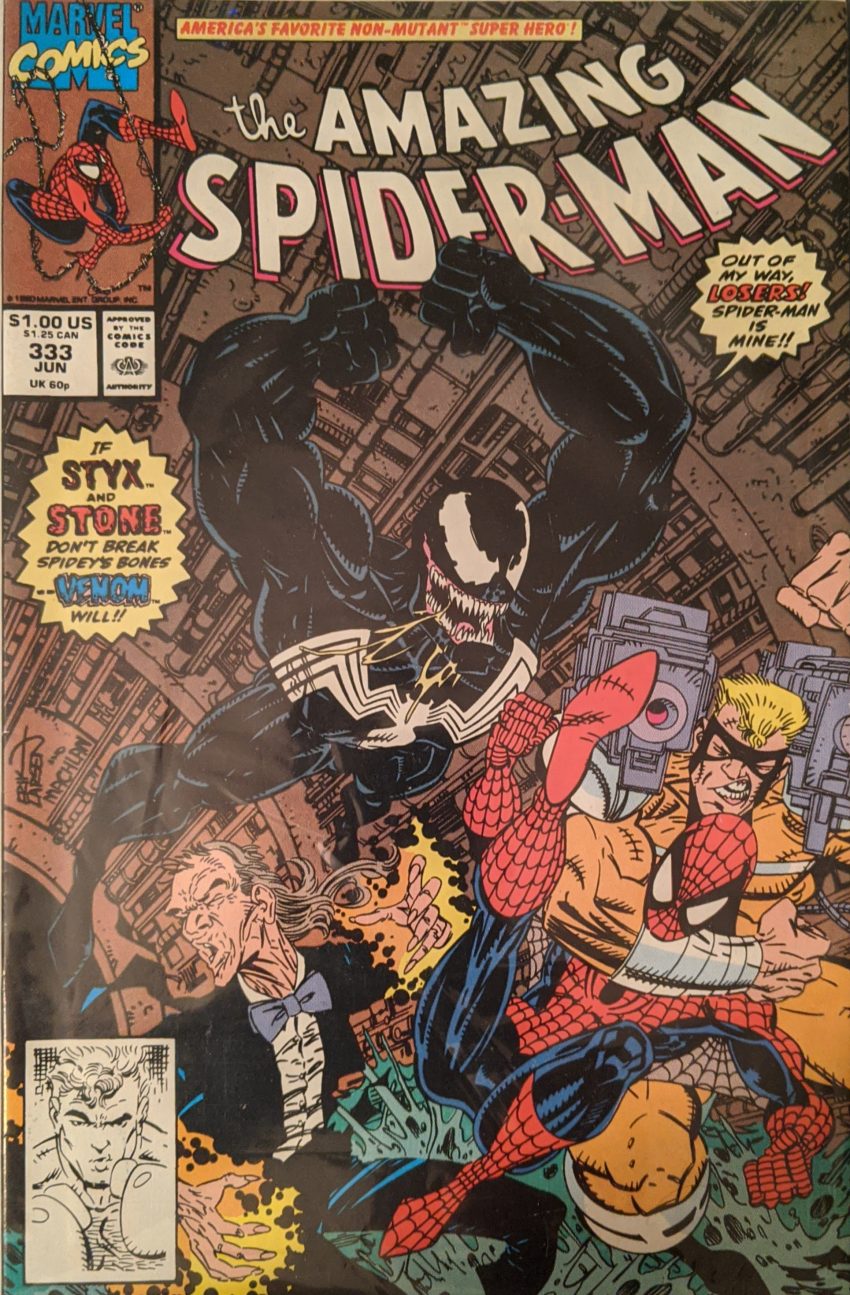 I don’t remember the circumstances of my acquiring it, but my childhood copy of this one has no cover. I got a new one during The Great Ebay Hysteria of 2018, so let’s check it out. “America’s Favorite Non-Mutant Superhero” makes a lot more sense. That was certainly true in 1990, and most other times since 1962. But anyway, this one starts with Peter at Aunt May’s house, wondering where Venom is, not knowing Venom is literally right outside. Peter recaps the deal as Aunt May makes some hot chocolate. He told her MJ is doing “girl stuff” tonight, so he came over to do “nephew stuff,” whatever that means, and then as soon as May is back in the kitchen, Venom taps Peter on the shoulder.

This is only the 3rd Venom story, and yet the concept already feels stale. His only mission in life, his only INTEREST in life, is killing someone we know he’ll never kill. Yeah, you know the other villains will always lose, too, but they will fail to rob a bank, take over the NY underworld, blow up the moon, whatever. Once in awhile they even succeed. There’s variety. Venom just wants to kill Spider-Man. He knows Peter’s secret and doesn’t set off his danger sense, which gives him a unique relationship to our hero, but to what end? This is story #3 and they’ve already recycled him menacingly showing up at Aunt May’s house twice. He’s even pre-arranging a fight again and setting the same ground rules as ASM 317. There’s nowhere to go with this guy. Venom is boring. The next day, Peter tries to get MJ to agree to leave town on vacation without telling her about Venom.

Down on his luck Peter Parker can’t just have money, so steps had to be taken. Stone recaps what he told Caesar over the radio last issue about following Venom before they get around to telling us what Styx’s deal is.

He’s a “living cancer” now. A slight tweak could’ve tied his origin to that of Cloak & Dagger. Stone implies a shared history is why he keeps the guy around, and then Caesar tells him to go back to Venom’s tunnel and wait for something to happen. Meanwhile, Peter goes to see Flash Thompson, hoping to get some advice.

Michelinie making Flash a sage for Peter is a weird choice, but it kinda works for me. Soon, we see Styx & Stone camped out waiting for something to happen when they see Spider-Man sneak into Venom’s tunnels. When he gets there, he finds Venom sitting on some boxes, recapping his origin, hoping to distract Spidey while he sends some of the symbiote at him across the floor, but it doesn’t work, and the fight starts. And then what will become the traditional Venom truly makes his first appearance.

He’s gone from just really bulky to Hulk-size, the dumb tongue is out, and he wants to eat brains. Venom is unfortunately complete. It’s Styx & Stone, of course. Though he doesn’t know it, Stone’s sonic cannon is much more deadly to Venom than Spider-Man, so that shakes things up pretty quickly. He’s taken down for a page as Stone deploys gas Then the mercenaries split up to take on the 2 spider-people.

I liked that Rodney joke as a kid, and I still like it today. Venom crushes Stone’s big dumb cannons and a dazed Spidey can’t move fast enough to stop Styx from running over and touching the symbiote, which seems to melt to the ground.

Would that it was, Spidey. Would that it was. As the box says, the next ASM begins a 6-part Sinister Six extravaganza, but there’s a bunch of other business to take care of first.