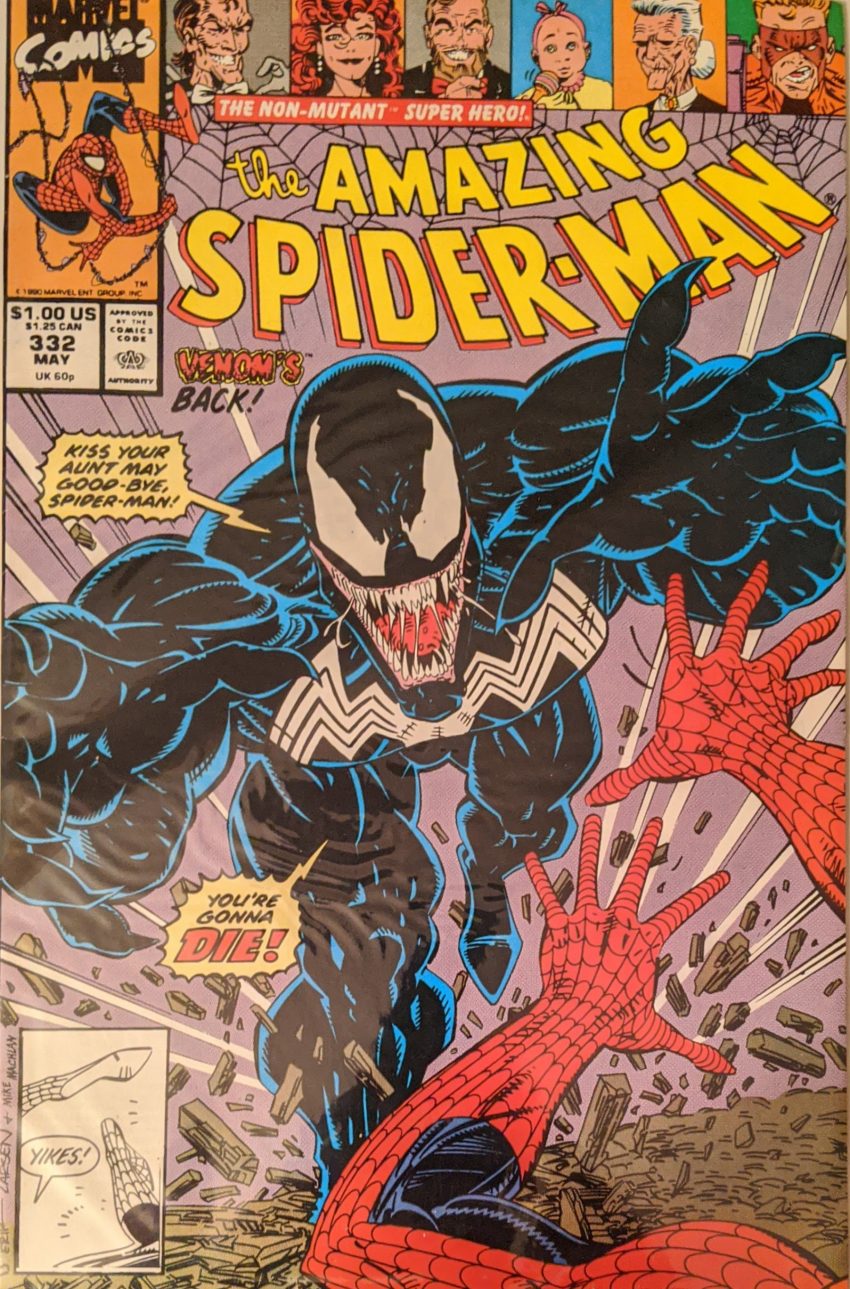 There’s those squares again.  That is funny cover copy. Not as funny as this…

But funny. And probably not as intentional. Note the drool. Erik Larsen is the one who gave Venom the drool, and later the big stupid tongue. I can’t source it, but I read as a youth that he did this to entertain himself while drawing the character because he didn’t like him and was bored. The longer he was forced to draw the increasingly popular Venom, the stupider Venom looked. Larsen’s boredom has had grim consequences on 30 years of comics, cartoons and film.

There it is, folks. “And friends” here is Jack Abel, Keith Wilson, Keith WIlliams, Brad Vancata, Joe Rosas and Mickey Ritter. As he begins working out, Eddie tells the symbiote how it didn’t amplify Spider-Man’s strength because he didn’t need it (wut?) but it amplifies his geometrically (Wut?), so the stronger he is, the stronger Venom is (WUT?). That makes no sense, but whatever, we’re off to this:

That’s Jay Leno and Malcolm Forbes, but I don’t know who Malcolm Forbes is. And the kid thinking he wishes he could get his picture taken with Spider-Man is very obviously the photographer and very obviously Jimmy Olsen. Maybe someone thought it was too obvious. Anyway, time for a perfunctory battle with Styx & Stone, who barely put up a fight before getting trounced and running away while some guy on a rooftop the fight moves to is very upset about Styx killing his flowers.

Spidey heads home, but MJ is not there, having left a note to meet her for lunch at work. Over lunch, they recap that Felicia Hardy is trying to get revenge on Peter by breaking Flash Thompson’s heart, but that conversation doesn’t really say anything new. And then.

Yikes! But we leave May’s house for the brave but kind of insane sight of Mary Jane marching into Jonathan Caesar’s place… the very place he kidnapped her to… alone… tell him to… leave Spider-Man alone. Seriously. A+ for nerves of steel, but she’s not even here to talk about her own beef with the guy? That rings false. He was watching her show as she told him to leave Spider-Man alone.

LOVE Stone’s grandpa pants. Meanwhile, Peter sees on TV that Venom is on the loose just as Aunt May calls to say he came by the house. She says she told Eddie Peter was on a photoshoot in Central Park, thinking an open space would be a good place for the cops to get him. Good thinking, May! But Peter knows Venom might get crazy if his target’s not there, so he feels he has no choice but to go down there.

Now there’s an entrance. Spidey tries to put some distance between them, but Venom is too quick for him.

Just in case you were wondering where the horse came from. And that right there is the first time Venom’s stupid tongue came out while he was doing his thing. Dubious history in the making. Spidey is so busy recapping Venom’s origin that Venom sneaks up on him, letting the aline flow over his head to blind and suffocate him. Spidey fires his web blind an happens to grab some trees he can yank back, smashing into Venom and setting himself loose. Spidey once again tries to get away, but Venom throws a taxi, missing him and hitting a horse drawn carriage on a bridge.

First instance of Venom threatening cannibalism. Maybe that was Michelinie reacting to all the drool and the tongue and the rapidly growing jaw?

Spider-Man saves the people Venom helped as Venom escapes. Later, we find Styx & Stone lost underground, radioing to Caesar that they followed Venom, but lost him. They plan to use Venom to find Spider-Man next issue. Will that work? Only one way to find out.