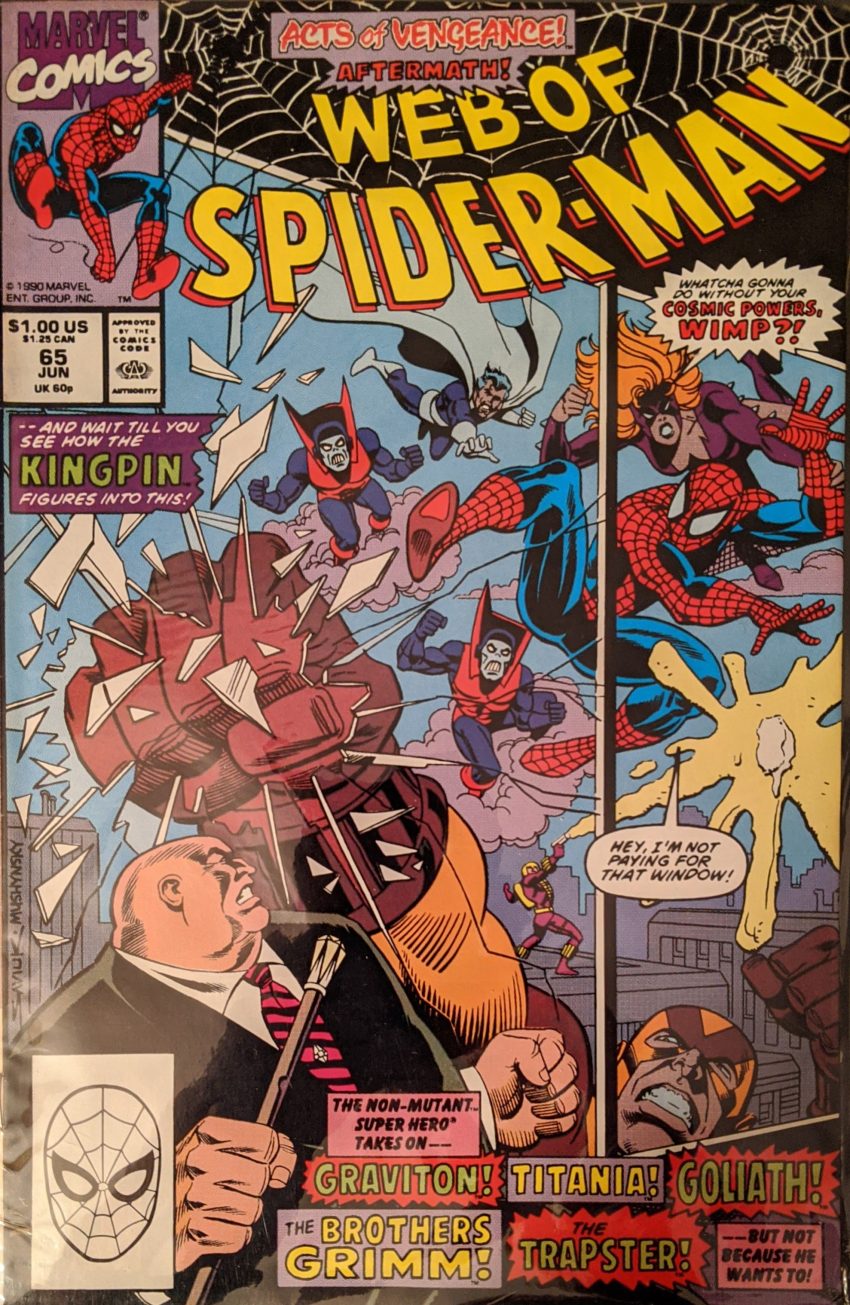 This is too many villains. 7 bad guys and 6 of them are jobbers? Too crowded! At least The Sinister Six was 6 characters you might actually want to see. The coloring here feels very sophisticated for the period. Everything outside the window having a slightly blue tint? Unusual. Well, anyway, our guy is still falling up. As luck would have it, he floats past a passenger jet, and manages to web onto it.

This is starting to feel like when Spider-Man had to mention he lost his alien costume at the top of any comic he appeared in for 3 months. You can stop referencing the cosmic powers now. So, believe it or not, Spider-Man is able to clamp onto the tail of the plane and ride it in for a landing. He’s freezing, but alive as airport staff tell him security will be after him any second. So he makes sure he can fall down again, and then takes off. Meanwhile, The Subpar Six have returned to Chameleon’s oil tanker to find it abandoned. Whoops! Their fault for trusting that guy. They wreck the place in frustration.

It seems like this plan is doomed to backfire, but it might cause his rival some trouble first. Hey, look at this:

That seems like a weird thing to do. No way editorial would like them have kids (I mean, in this period, anyway).  I dunno. MJ is horrified to find a Green Goblin suit & gear behind that curtain. She wonders if Liza knows, and if she should tell her, fearing the worst. These Green Goblin foreshadowing bits have been really heavy handed. Meanwhile, Spider-Man is watching as Thomas Fireheart & The Bugle staff on the street in front of the building are told that it should be condemned and torn down. Somehow, being floated into the air the first time didn’t hurt it much, but this time, the structural damage is too great. But before Spider-Man can freak out too much about his second home being destroyed, Goliath stomps by on his way to Kingpin’s tower, and Spidey follows. At Kingpin’s, the villains show up to threaten him. Trapster has some kind of acid past that cuts a hole in the window for them and everything.

Spidey sucker punches Graviton, taking his most dangerous foe out of it for awhile, but then Titania is on him, and the rest aren’t far behind. Tackled in mid-air by Titania, Spidey just lets go of his web and knocks her away from him, leaving her to plummet t the ground. He figures it will just stun her. But Goliath comes after him the second he’s gotten rid of Titania, forcing him into The Trapster’s range.

Goliath’s fist gets stuck to a wall, and he weirdly can’t break free. He’s been smashing through walls in every appearance in this title, and all of a sudden, he can’t do it anymore. But then The Brothers Grimm deploy Spidey’s best friend, gas.

Alright. Goliath finally breaks loose, but he hasn’t noticed Spider-Man webbed his ankles together, and falls to the ground, knocking himself out.

Ok. I don’t follow Chammy’s logic at all, and also, those girls seemed scared of him earlier and now it’s all love. Ah, well, whatever. The end. I am glad to be done with those lames. Meanwhile, the letter column is more amusing than it’s been in awhile.

Nine letters! He had to buy stamps and envelopes! What is really going on, Fish???